"The Climb" Is Released

"The Climb" is the first single from the soundtrack to the motion picture Hannah Montana: The Movie.

Miley Cyrus' first release to country music radio, it was officially released to that format on March 9, 2009. As of February 2009, the song has charted on the Billboard Pop 100 chart. The song debuted at #48 on the Hot Country Songs chart for the chart week of March 14, 2009. A week later, the song debuted on Billboard Hot 100 at #6, giving Cyrus her third top-ten U.S. single. In its 7th week on Hot Digital Songs chart, the song jumped to #2 with sales of 189,566 and peaked at #4 on the Billboard Hot 100, becoming the highest peak of any current Disney Channel artist, beating the peak of the Jonas Brothers' "Burnin' Up" which peaked at #5. The song also won the 2009 Kids' Choice Award for Best Female Singer and 2009 MTV Movie Awards for Best Song from a Movie for Hannah Montana: The Movie.

On November 4, 2008, Hollywood Records released a Christmas themed CD titled All Wrapped Up. Which include Cyrus version of the Christmas hit "Santa Claus Is Coming to Town". Cyrus co-wrote and recorded one of the two original songs to the soundtrack of Bolt, the song also features the other Bolt star John Travolta. Titled "I Thought I Lost You", it was later nominated to a Golden Globe Award for Best Original Song. Her single, "The Climb" from the Hannah Montana: The Movie soundtrack debuted at number six on the Billboard Hot 100, thus becoming her highest charting single to date since "See You Again" and "7 Things" which charted at #10 and #9 respectively.[43] And she will now launch Hannah Montana 3 on July 14, 2009. 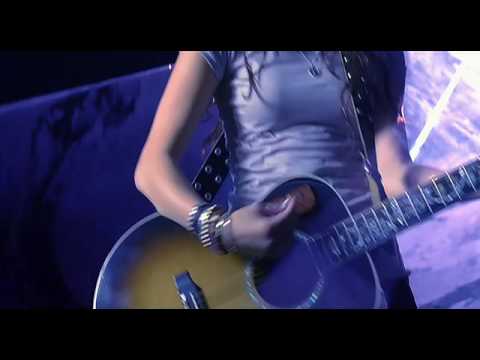