Gov. Pat Quinn on Friday called on fellow Democrat Roland Burris to resign from the Senate, saying the controversy surrounding Burris' appointment to the seat was hurting the state and his constituents.

Quinn praised Burris as an honorable man, but said a shadow hangs over him after revelations the senator attempted to raise money for disgraced former Gov. Rod Blagojevich, who appointed him, and failed to disclose multiple conversations with Blagojevich advisers.

"To step aside and resign is, I think, a heroic act and I ask Roland to do that," Quinn said at a news conference.

In the event Burris does resign, Quinn said lawmakers should quickly pass legislation to fill any Senate vacancy by special election, rather than gubernatorial appointment.

Gov. Pat Quinn, who is calling on embattled U.S. Sen. Roland Burris to resign, said Saturday he has not yet spoken to the senator about stepping down.

The new governor, who said he's known Burris for 37 years, suggested that Burris "find a different way to serve and step aside." 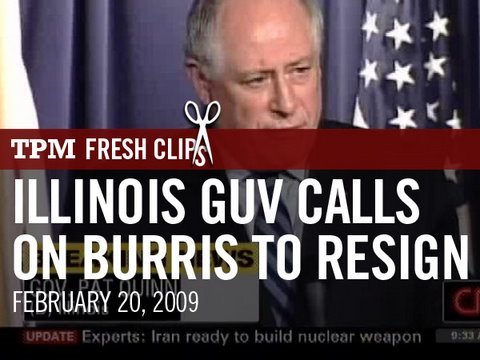