US Secretary of State Hillary Clinton arrived in Copenhagen on Thursday just as climate negotiations had “reached a critical junction” and talks were “difficult”, as she said at a press briefing.

Hillary Clinton confirmed that the US wants strong action to combat climate change. She hoped that negotiations would take important steps forward within few hours, as “we all face the same challenge together”.

A deal at the UN climate summit looks more likely following a frantic day of behind the scenes diplomacy.

China signalled concessions on monitoring of emission curbs, and the US said it would commit money for developing countries.

Leaders are likely to have big choices to make when they meet on Friday.

[On] Thursday morning, the Copenhagen summit received a much-needed boost from a new player, Secretary of State Hillary Clinton, who had arrived early that day. At a news conference, Clinton told reporters that the U.S. would join with other developed nations to mobilize $100 billion in climate financing by 2020. The offer seemed timed to address one of the main obstacles to negotiation at the Copenhagen summit — the lack of long-term aid from the developed world to help poor nations fight warming — and gave some life to the stalled talks. As de Boer said at a press conference shortly afterward, "Hold tight. Mind the doors. The cable car is moving again." 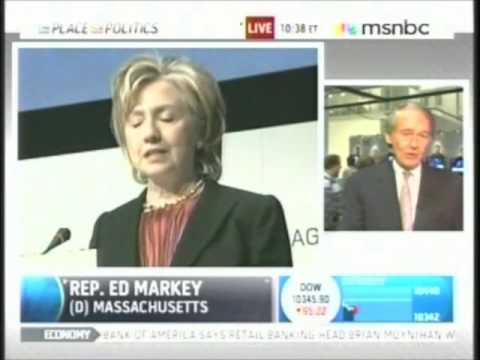