The Nobel Prize in Physics (Swedish: Nobelpriset i fysik) is awarded once a year by the Royal Swedish Academy of Sciences.

It is one of the five Nobel Prizes established by the will of Alfred Nobel in 1895 and awarded since 1901; the others are the Nobel Prize in chemistry, Nobel Prize in literature, Nobel Peace Prize, and Nobel Prize in physiology or medicine. The first Nobel Prize in Physics was awarded to Wilhelm Conrad Röntgen, a German, "in recognition of the extraordinary services he has rendered by the discovery of the remarkable rays (or x-rays)." This award is administered by the Nobel Foundation and widely regarded as the most prestigious award that a scientist can receive in physics. It is presented in Stockholm at an annual ceremony on December 10, the anniversary of Nobel's death.

Charles Kuen ("K. C.") Kao CBE FRS FREng (traditional Chinese: 高錕; simplified Chinese: 高锟; pinyin: Gāo Kūn (Kao Kuen); born 4 November 1933) is a pioneer in the development and use of fiber optics in telecommunications. Kao, widely regarded as the "Father of Fiber Optics" or "Father of Fiber Optic Communications", was awarded half of the 2009 Nobel Prize in Physics for "groundbreaking achievements concerning the transmission of light in fibers for optical communication".

Willard Sterling Boyle (born August 19, 1924) is a Canadian physicist and co-inventor of the charge-coupled device. On October 6, 2009 it was announced that he would share the 2009 Nobel Prize in Physics for "the invention of an imaging semiconductor circuit—the CCD sensor".

George Elwood Smith (born May 10, 1930) is an American scientist, applied physicist, and co-inventor of the charge-coupled device. He was awarded a one-quarter share in the 2009 Nobel Prize in Physics for "the invention of an imaging semiconductor circuit—the CCD sensor". 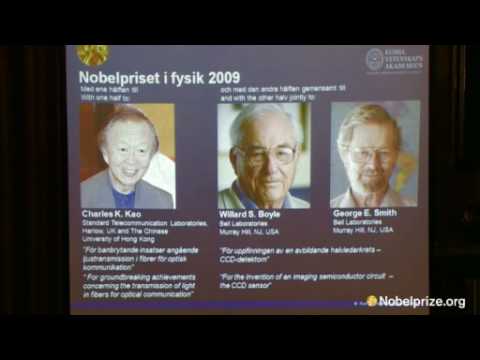