Nobel Prize In Chemistry Is Awarded To Ada Yonath, Venkatraman Ramakrishnan, And Thomas A. Steitz

The Nobel Prize in Chemistry (Swedish: Nobelpriset i kemi) is awarded annually by the Royal Swedish Academy of Sciences to scientists in the various fields of chemistry.

It is one of the five Nobel Prizes established by the will of Alfred Nobel in 1895, awarded for outstanding contributions in chemistry, physics, literature, peace, and physiology or medicine. This award is administered by the Nobel Foundation and awarded by a Nobel Committee that consists of five members elected by The Royal Swedish Academy of Sciences. The first Nobel Prize in Chemistry was awarded in 1901 to Jacobus Henricus van 't Hoff, of the Netherlands, "for his discovery of the laws of chemical dynamics and osmotic pressure in solutions." The award is presented in Stockholm at an annual ceremony on December 10, the anniversary of Nobel's death. The 2008 Nobel Prize was awarded to Osamu Shimomura, Roger Tsien and Marty Chalfie for their work on green fluorescent protein. They were awarded the prize amount of 10,000,000 SEK (slightly more than €1 million, or US$1.4 million). The 2009 Nobel Prize was awarded to Thomas Steitz, Ada Yonath and Venkatraman Ramakrishnan.

Ada E. Yonath (born 1939) (Hebrew: עדה יונת‎, pronounced [ˈada joˈnat]) is an Israeli crystallographer best known for her pioneering work on the structure of the ribosome. She is the current director of the Helen and Milton A. Kimmelman Center for Biomolecular Structure and Assembly of the Weizmann Institute of Science. In 2009, she received the Nobel Prize in Chemistry along with Venkatraman Ramakrishnan and Thomas A. Steitz for her studies on the structure and function of the ribosome, becoming the first Israeli woman to win the Nobel Prize out of nine Israeli Nobel laureates, the first woman from the Middle East to win a Nobel prize in the sciences,[citation needed] and the first woman in 45 years to win the Nobel Prize for Chemistry.

Venkatraman "Venki" Ramakrishnan (Tamil: வெங்கட்ராமன் ராமகிருஷ்ணன்; born 1952 in Chidambaram, Tamil Nadu, India) is a structural biologist at the MRC Laboratory of Molecular Biology in Cambridge, England. He received the 2009 Nobel Prize in Chemistry "for studies of the structure and function of the ribosome".

Thomas Arthur Steitz (born August 23, 1940) is a Sterling Professor of Molecular Biophysics and Biochemistry, Howard Hughes Medical Institute, Yale University, New Haven, Connecticut, USA. Steitz was awarded the 2009 Nobel Prize in Chemistry along with Venkatraman Ramakrishnan and Ada Yonath "for studies of the structure and function of the ribosome". Steitz also won the Gairdner International Award in 2007 "for his studies on the structure and function of the ribosome which showed that the peptidyl transferase was an RNA catalyzed reaction, and for revealing the mechanism of inhibition of this function by antibiotics". 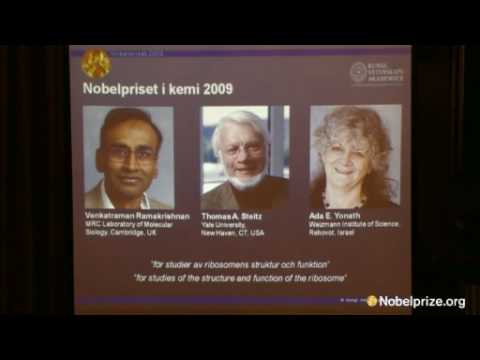