On October 9, 2009, the leader of the Norwegian Nobel Committee, Thorbjørn Jagland, announced that Obama had won the 2009 Nobel Peace Prize "for his extraordinary efforts to strengthen international diplomacy and cooperation between peoples". As specific examples of the work that led to the award, the Nobel Prize Committee highlighted efforts to promote nuclear nonproliferation (particularly in Iran), and a "new climate" in international relations fostered by Obama, especially in reaching out to the Muslim world.

Obama, one of 205 original nominees, will be awarded a gold medal, diploma and $1.4 million in prize money. Other possible candidates had included civil rights activists in China and Afghanistan, as well as Prime Minister Morgan Tsvangirai of Zimbabwe. Nominations for the peace prize closed on February 1, 2009, less than two weeks after Obama's inauguration on January 20, far earlier than other peace initiatives that have been recognized by the Nobel Prize Committee.

The full text of the award citation:

The Norwegian Nobel Committee has decided that the Nobel Peace Prize for 2009 is to be awarded to President Barack Obama for his extraordinary efforts to strengthen international diplomacy and cooperation between peoples. The Committee has attached special importance to Obama's vision of and work for a world without nuclear weapons.

Obama has as President created a new climate in international politics. Multilateral diplomacy has regained a central position, with emphasis on the role that the United Nations and other international institutions can play. Dialogue and negotiations are preferred as instruments for resolving even the most difficult international conflicts. The vision of a world free from nuclear arms has powerfully stimulated disarmament and arms control negotiations. Thanks to Obama's initiative, the USA is now playing a more constructive role in meeting the great climatic challenges the world is confronting. Democracy and human rights are to be strengthened.

Only very rarely has a person to the same extent as Obama captured the world's attention and given its people hope for a better future. His diplomacy is founded in the concept that those who are to lead the world must do so on the basis of values and attitudes that are shared by the majority of the world's population.

For 108 years, the Norwegian Nobel Committee has sought to stimulate precisely that international policy and those attitudes for which Obama is now the world's leading spokesman. The Committee endorses Obama's appeal that "Now is the time for all of us to take our share of responsibility for a global response to global challenges." 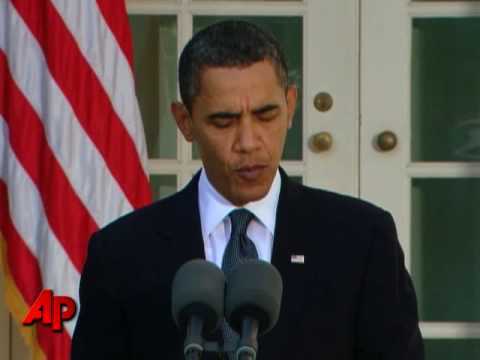