President Barack Obama toured parts of New Orleans that are still struggling to recover from Hurricane Katrina and promised residents the bungled government response after the disaster won’t be repeated.

Obama arrived today in New Orleans to assess progress in the city. He stopped at a school in the city’s Lower Ninth Ward, which was devastated by the hurricane four years ago, and conducted a town-hall style event.

In a raucous town hall meeting that at times resembled a church revival, President Obama on Thursday fired back at critics who say he's accomplished little in his nine months in office, telling a roaring crowd, "I'm just getting started."
President Obama is visiting New Orleans, Louisiana, on Thursday to talk about rebuilding efforts.

"I never thought any of this was going to be easy," said Obama, speaking at the University of New Orleans in his first visit to the Gulf Coast city since taking office. He poked fun at his critics, asking, "Why haven't you solved world hunger yet? It's been nine months. Why?" 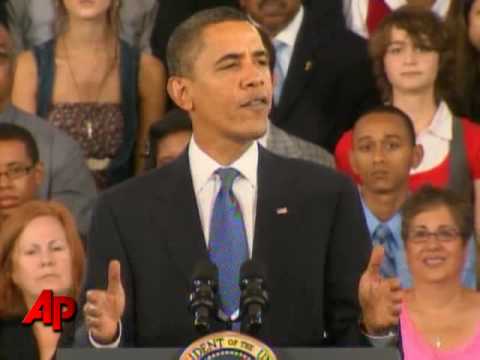