Threatening Iran with harsh new sanctions to advance negotiations over its nuclear program would be “counterproductive,” Russia’s foreign minister said Tuesday, throwing cold water on the Obama administration’s hopes that Russia had been persuaded to cooperate with its effort to intensify the global pressure on Tehran.

The minister, Sergey V. Lavrov, said after meeting with Secretary of State Hillary Rodham Clinton here that diplomacy should be given a chance to work, particularly after a meeting in Geneva this month in which the Iranian government said it would allow United Nations inspectors to visit a clandestine nuclear enrichment facility near the holy city of Qum.

Russia pushed back Tuesday at U.S. efforts to threaten tough new sanctions if Iran fails to prove its nuclear program is peaceful, a setback to the Obama administration's desire to present a united front with Moscow.

After meeting with U.S. Secretary of State Hillary Rodham Clinton, Russian Foreign Minister Sergey Lavrov said Moscow believed that such threats would not persuade Iran to comply and that negotiations should continue to be pursued. 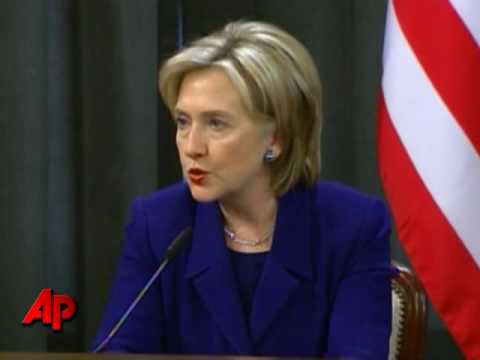