On January 5, 2009, President-elect Barack Obama announced he would nominate Kagan to be Solicitor General.

Before this appointment she had limited courtroom experience. She had never argued a case at trial, and had not argued before the Supreme Court of the United States. This is not uncommon, however, as at least two previous Solicitors General, Robert Bork and Kenneth Starr, had no previous appellate experience at the Supreme Court, though Starr served as a Circuit Court Judge prior to acting as Solicitor General.
Kagan was confirmed by the U.S. Senate on March 19, 2009, by a vote of 61 to 31,becoming the first woman to hold the position.

For the high-profile job of solicitor general, who represents the Justice Department before the Supreme Court, the president-elect chose Elena Kagan, currently dean of the Harvard Law School. She served as a key domestic policy adviser for President Bill Clinton and, according to the transition team, helped formulate and implement law and policy in such areas as education, crime and public health.

Kagan was the first female solicitor general, often called the "10th justice" as she argued the government's case before the U.S. Supreme Court.

Kagan was confirmed for the job by the Senate, 61 to 31, and didn't display personal opinions about federal statutes that she defended. "I do not think it comports with the responsibilities and role of the solicitor general for me to say whether I view particular decisions as wrongly decided or whether I agree with criticisms of those decisions."
Observers described Kagan as confident in her arguments before the Supreme Court, despite the fact she'd never argued a case there previously. Kagan's win-loss record before the court, too, is unclear, as it hasn't decided all cases she argued before it. But she lost, 5-4, a landmark campaign finance case, Citizens United v. Federal Election Commission, that is likely to allow corporate money to flow freely into political races 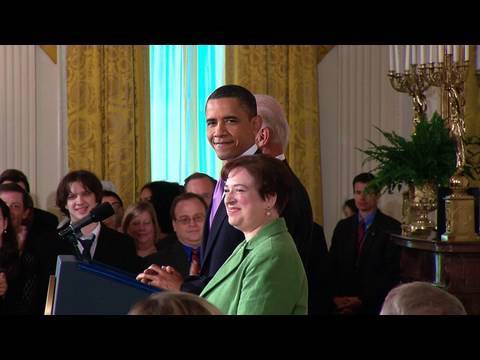