The 2009 NHL Winter Classic, also known as the Bridgestone NHL Winter Classic 2009, was a specially-staged National Hockey League regular-season game played outdoors on January 1, 2009 at 12:36 p.m. CST (1836 UTC) at Wrigley Field in Chicago, Illinois. The game pitted the Chicago Blackhawks, who normally play their home games indoors at United Center, against the defending Stanley Cup champion Detroit Red Wings in the 701st game between these rivals in the NHL's Central Division.[2] The Red Wings won the game 6–4 despite falling behind 3–1 in the first period. This was the first Winter Classic to involve at least one of the Original Six teams.

The two teams wore vintage-style uniforms, using the current Reebok Edge equipment and material. The Red Wings wore a version of the sweaters worn by the Detroit Cougars in 1926–27, their first season in the NHL, but with their familiar "Winged Wheel" logo on the shoulders. The Blackhawks wore sweaters comprised of a mix of their 1936–37 sweaters and their 1937–38 sweaters, with the design from 1936–37 and the chest crest from 1937–38.[3]

Yes, the Detroit Red Wings beat the Chicago Blackhawks 6-4 in the Winter Classic at Wrigley Field on Jan. 1. Yes, the event was a success in many ways, from "Take Me Out To The Hockey Game" to the incredible crowd-assisted rendition of the Star Spangled Banner. And yes, the ice held up well - it was a fast-paced hockey game with plenty of goals.

You probably knew all that from the intense media coverage by ESPN, the Tribune, Sun Times, and WGN Radio. But here's something you probably haven't heard: The key turning point to this game happened before the puck even dropped.

Forgive the obvious baseball allusion, but from the cool retro uniforms worn by the Detroit Red Wings and Chicago Blackhawks, to the 40,818 fans bundled up and jammed into venerable Wrigley Field belting out the national anthem en masse, to the old-style black fedoras sported by the Detroit coaching staff, to the wildly entertaining game itself, the 2009 Winter Classic was another red-letter day for the league.

For the second straight year, the NHL has taken its game outdoors, and this success at Wrigley virtually guarantees the Winter Classic will become an annual event and the National Hockey League will carve its own place on the sporting calendar with its Jan. 1 hockey lovefest.

After getting to bed around 3 a.m. after celebrating the New Year, I woke up at 7 a.m. to get ready and head to Wrigleyville where I was meeting up with a few people at Salt and Pepper Diner for breakfast. After a delicious meal in the cozy yet busy diner which is less than a block from Wrigley Field, we headed towards Gate D and entered the Wrigley Field concourse. After walking around the concourse for a couple minutes taking in the surroundings, we came across a crowd watching four Red Wings players kicking the soccer ball around including Andreas Lilja and Kirk Maltby pictured below. 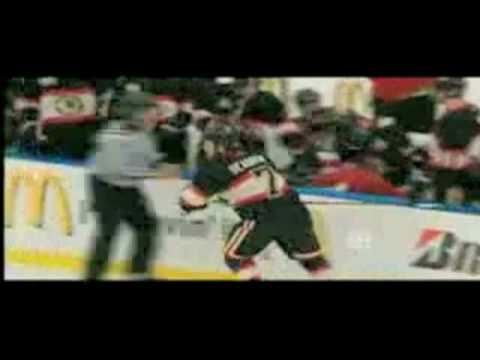 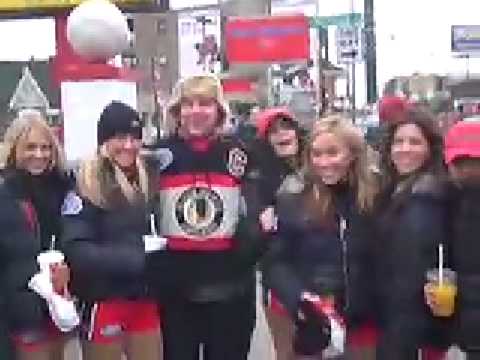