The Ford Flex is a full-size crossover manufactured by Ford Motor Company.

Its styling is based on the Ford Fairlane concept unveiled at the 2005 North American International Auto Show. The production vehicle made its debut at the 2007 New York International Auto Show. Sales of the Flex began in summer of 2008 as a 2009 model. The Flex is produced on the same assembly line as the Edge and Lincoln MKX crossovers at the Oakville Assembly Plant in Oakville, Ontario, where the first Flex was driven off the line at the beginning of June 2008. It replaced the Ford Freestar minivan and therefore is the first crossover to feature both minivan and SUV properties delivered by Ford. The Flex is only sold in the United States, Canada and in the Middle East.

Interior
The 2009 Ford Flex includes seven-passenger seating, including adjustable and removable footrests for second-row passengers. The second and third row seats fold flat into the floor. The vehicle includes a class-exclusive optional interior "mini-fridge" refrigerator in the middle console mounted between the second-row seats. A voice-activated communications and entertainment system, called Ford Sync, integrates the functions of cell phones, SIRIUS Satellite Radio, compact disc, DVD and other media players, navigation systems, and was developed in collaboration with Microsoft. The interior is lit with programmable "mood lighting" available in seven colors, along with a multi-panel Vista Roof, similar to that on the Ford Edge, for skylighting. The Navigation system has a built in hard drive for music and picture storage.

Exterior
The Flex continues Ford's signature chrome horizontal three-bar grille design, as seen on the Edge, Taurus X, Fusion, and 2008 Taurus. The windows and pillars appear blacked out, and the roof is available as either white, silver, or body-colored. The SEL and Limited models offer LED tail lamps and BiXenon headlamps, and a "capless" fueling system without the traditional fuel door and cap, which provides better sealing to reduce evaporative emissions from the fuel tank. The standard wheels are 18-inch (460 mm) diameter, with 19- and 20-inch (480 and 510 mm) versions available.

Safety and security
An optional back-up camera, mounted just above the bumper, allows the driver to see obstructions behind the vehicle, displayed on the 8-inch (200 mm) navigation display screen, whenever reverse gear is engaged. The Flex comes with Ford's AdvanceTrac traction control system with roll stability control which helps the driver maintain control on low traction surfaces and during emergency maneuvers. All-wheel-drive is available as an option.

Chassis
The Flex includes an independent rear suspension system. It is built on the Ford D4 platform, a reengineered and enlarged version of the Ford D3 platform which underpins the 2005-2007 Five Hundred/Freestyle, 2008-2009 Taurus/Taurus X, 2009 Lincoln MKS and 2010 Ford Taurus. This chassis was in turn based on the Volvo P2 platform.

Active Park Assist
Offered on the Flex is Ford's Active Park Assist system, which finds and measures a suitable parking space, then operates the steering wheel to accomplish the parallel parking task. This feature uses software control of the Electric Power Steering (EPS) system in response to inputs provided by ultrasonic sensors. A competing camera-based system from Lexus takes three times as long.

Introduction
It wasn't too long ago that minivans reigned supreme as the go-to choice of growing families across the country. In recent years, however, minivan sales have declined due to the arrival of seven-passenger crossover SUVs, which allow moms and dads to look and feel a little more stylish while transporting their broods. These crossovers don't offer as much utility, however. So what if an automaker attempted to marry the "cool factor" of a crossover SUV and the unbeatable practicality of a minivan's shoebox-like shape? The result would probably end up something like the 2009 Ford Flex.

With styling inspired by vintage vacuum cleaners and an overall shape that resembles a super-sized cross between a first-generation Scion xB and a Mini Cooper Clubman, it's safe to say there's nothing else quite like the Ford Flex on the road today. Though the Flex shares its underpinnings and powertrain with the capable but anonymously styled Taurus X, its daring design sets it apart from the legions of look-alike crossovers roaming our roads. Fortunately for Ford, the Flex's appeal is much more than skin-deep. For example, it offers one of the highest-quality interiors we've seen from Ford in a long time, replete with plentiful soft-touch surfaces and an expensive-looking design. Ford's innovative Sync MP3 player and phone interface system is also available, as is a Vista sunroof, which consists of four fixed glass panels that brighten up the cabin for second- and third-row occupants. Add a reasonably powerful 3.5-liter V6 to the mix, along with available all-wheel drive, and you've got all the ingredients of a crowd-pleasing people mover.

Featuring conventional rear doors instead of the maximally convenient sliding variety, the Flex nonetheless constitutes a compelling package for families who just can't stomach the idea of rolling in a blatantly utilitarian conveyance. Seven adults can fit comfortably inside its elongated cabin, and access to the third row is a cinch with the optional power-folding second-row seats, though a bit of a pain without them. The second-row seats also slide fore and aft, while an optional refrigerator inside the rear console keeps perishables cool while driving. With the rear seats flipped down and the second row flipped forward, the Flex offers a large cargo area, though minivans are still considerably more capacious.

It's hard to predict whether the new Ford Flex will be a success, but Ford deserves credit for boldly bringing such an unconventional yet well-thought-out offering into the marketplace. In theory, the Flex should appeal to any family looking for a winning combination of panache and practicality. We suggest that consumers looking at either a minivan or a large crossover SUV give it strong consideration.

Many of the Limited's features are available as options on the SEL, and the Sync system is also optional on the SE. Additional options include second-row captain's chairs (heated on the Limited), the four-panel Vista sunroof, a towing package, keyless ignition/entry and a rear-seat DVD entertainment system. The Limited can be equipped with a touchscreen navigation system featuring voice recognition, an integrated back-up camera and Sirius Travel Link, which provides real-time traffic, weather and other information. A white- or silver-painted roof is also available.

Powertrains and Performance
The Flex is powered by a 3.5-liter V6 that churns out 262 horsepower and 248 pound-feet of torque. A six-speed automatic is the only available transmission. The Flex is either front- or all-wheel drive, although the latter is available only on the SEL and Limited. We managed a respectable 8.8-second 0-60 gallop in the AWD Flex. EPA fuel economy for the front-wheel-drive Flex is 17 mpg city/24 mpg highway and 19 mpg combined, which is on par with GM's full-size crossovers. Opting for AWD drops those numbers by about 1 mpg.

Interior Design and Special Features
The 2009 Ford Flex's interior quality is top-notch, with abundant soft-touch materials and an attractive, upscale design. The spacious layout affords true seven-passenger seating -- even the third row is hospitable for full-size adults, offering surprisingly generous leg- and headroom, although the second-row seat tracks impinge on third-row foot room, and the third-row armrests aren't padded like the others. The available Microsoft Sync system imbues the Flex with a high-tech character, offering trick features like advanced voice-recognition software for MP3 players as well as cell phones. Other intriguing options such as the Vista roof, Sirius Travel Link and rear-console refrigerator extend the Flex's appeal.

One notable misstep, however, is the Flex's lack of a telescoping steering column -- an inexcusable omission at this price point. Our longer-legged editors found that they had to adopt a straight-armed driving position in order to reach the wheel. Also, the Flex's seats may be on the narrow side for larger folks. Moreover, the Flex's maximum cargo capacity of 83 cubic feet, which is more than adequate for most purposes, is smaller than GM's large crossovers and positively dwarfed by that of any minivan.

Driving Impressions
On the road, the 2009 Ford Flex gets the job done in a competent if uninvolving way. Though its prodigious length is always apparent, the Flex handles securely for such a large vehicle, albeit with a fair amount of play in the steering. The suspension provides a forgiving ride, cushioning impacts with impressive refinement. While acceleration is adequate overall, the 3.5-liter V6 feels rather soft off the line. The long-travel brake pedal doesn't necessarily inspire confidence, but our AWD test vehicle stopped from 60 mph in a satisfactory 128 feet.

The all-new Ford Flex is a full-size crossover vehicle designed with bold styling and functionality to compete in the popular crossover segment.
The front-wheel or all-wheel drive Flex includes a 3.5-liter V6 engine and six-speed automatic transmission. Class leading seven-passenger seating is standard on all trim levels. Available features include the SYNC communication and entertainment system, a Multi-Panel Vista Roof, interior refrigerator, and capless fueling. Standard safety features include four-wheel disc brakes with ABS, stability and roll control, six airbags, and a tire pressure monitor.
The Ford Flex is brand-new for 2009. 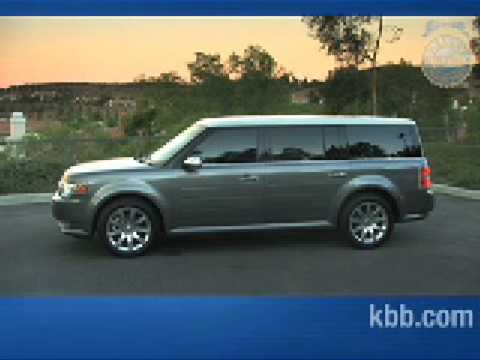 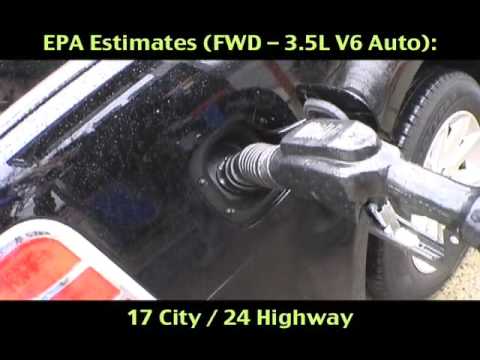