A human stampede occurred on September 30, 2008, at the Chamunda Devi temple in Jodhpur, Rajasthan, India, in which 249 people were killed and more than 400 injured.

The 15th-century temple is dedicated to the goddess Chamunda Devi and is located within the premises of Mehrangarh Fort.

About 25,000 Hindu pilgrims were visiting the temple to mark the first day of the nine day long Navratri, a major festival in Hinduism dedicated to Goddess worship and celebrated across the world.

The devotees scrambled towards the door the moment it opened, resulting in the destruction of the barricades. Many people were injured when they lost their footing on the slope approaching the temple.

According to The Times of India, local reports suggest that a bomb blast in nearby Mehrangarh created panic among the pilgrims resulting in the stampede. However, the BBC News reported that a collapsing wall may have also caused the stampede. Some eyewitnesses told CNN-IBN that a rumor about a bomb being planted in the temple caused panic among pilgrims.

Others said there was a scramble in the men's queue; some devotees slipped and soon there was a massive resultant stampede where a day of celebration turned into one of mourning.

An eyewitness also said that the path leading to the temple was very narrow with no emergency exit routes.

It was not even dawn. Over 10,000 had turned up at the Chamunda Devi temple in Jodhpur’s Mehrangarh Fort for a darshan of the goddess. The temple gates had opened earlier than usual on Tuesday morning, at 3.45 am.

Things went smoothly for about two hours. Then, suddenly, some people began pushing forward. A barricade broke, opening up more space on the 8-ft-widepath. Seeing the widened approach, people began jumping the queue, and suddenly everything started going wrong.

A few people fell down and were crushed under the feet of rushing devotees. The news, as it trickled down, got twisted. Someone mentioned a bomb, and all hell broke loose. Panic-stricken people started running in the opposite direction, pushing, trampling.

The death toll in the Tuesday's early morning stampede in an ancient hilltop temple in Jodhpur has been revised to 224, with police saying that one reason for the count going up was that many had taken their dead home from the mishap site itself.

"We conducted a detailed survey in the last two days and found that the death toll was higher than our earlier estimates," said Rajiv Dasot, inspector general of police, Jodhpur on Thursday.

The survey, he said, revealed that some relatives had taken bodies of their kin directly home so they were not in the initial count of 149. 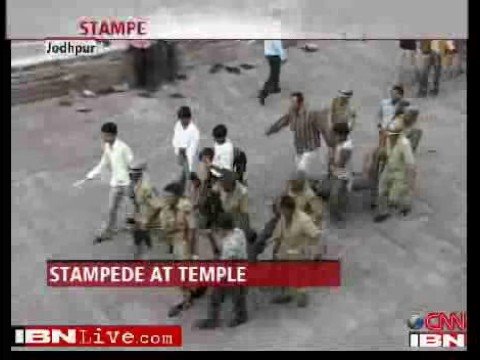