Venetian Night In Brief: Venetian Night is the oldest city sponsored event and is very popular -- hundreds of thousands of people attend the lighted boat parade and impressive fireworks display.

Where: Lake Michigan shoreline between Monroe Street and Roosevelt Road

Admission: Admission is free.
Getting to Venetian Night By Public Transportation: CTA bus lines #145 or #151 to Monroe/Michigan stop. Monroe Harbor is also a short walk east from Loop Red and Blue line subway stops.
Parking at Venetian Night: There are several nearby garages: Parking garages are located at the Millennium Park Garage accessed on Columbus between Randolph and Monroe, the Monroe Street Garage at Monroe & Columbus, and the Grant Park garage with entrances at Michigan and Madison or Michigan and Randolph. Parking is also available at Navy Pier

Venetian Night, named due to the fact that it is modeled after the boat parades in Venice, Italy, started in 1958 as part of Chicago's Lakefront Festival. While that festival is now defunct, Venetian Night lives on. About 30 boats get decked out with lights and decorations, and form a parade along the shore of Lake Michigan between the Shedd Aquarium (Roosevelt Road) and the Chicago Yacht Club (Monroe Street).

After the parade, the city puts on a great fireworks display at Monroe Harbor accompanied by music provided by local radio station WXRT (93.1).

Approximately 35 boats will be decorated with lights and props as they sail along beautiful Lake Michigan, between the Shedd Aquarium at Roosevelt Road and the Chicago Yacht Club at Monroe Street. People of all ages stake out spots along the lakefront as early as 9 am to ensure a good view of the event. With an expected attendance of 675,000, public transportation, walking or biking to Venetian Night is suggested.

Venetian Night is the longest running event that the City of Chicago produces, and was once a multiple day event that featured a beauty pageant and parade on State Street in addition to the lighted boat parade and fireworks show on the waterfront.

A special thank you to the Chicago Yachting Association. 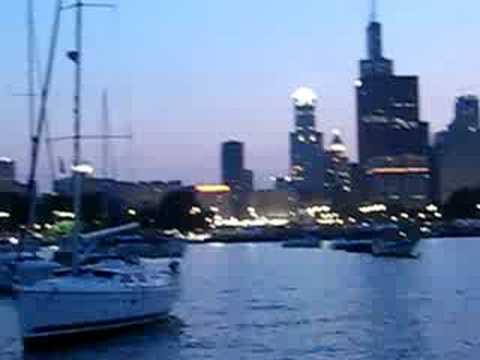