Mayor Daley and The City of Chicago have announced that a summer of classic films will be shown at the Chicago Outdoor Film Festival.

The free festival takes place at Grant Park every Tuesday evening for seven weeks. This year's festival features seven classic American films from 1950 to 1980. The big movie screen in Grant Park shows movies under the starlit sky at sunset. Movie goers bring lawn chairs and blankets and enjoy a summer night with free entertainment. The outdoor film festival opens on July 15 and runs through August 26.

Films are classic American movies dating from 1950 to 1980. This year's schedule includes All About Eve, The Odd Couple - College Night, The Blues Brothers, The Day the Earth Stood Still, Touch of Evil, An Affair to Remember and Grease.
Movie Schedule

* July 15 at 8:57 pm: All About Eve. This movie, starring Bette Davis and Anne Baxter won six Academy Awards for the 1950 season. Bette Davis, Anne Baxter and George Sanders all turned in outstanding performances in this movie. The story about back-stage back-stabbing maneuvers by a young actress who insinuates her life into that of an aging star. She intends to steal the life of the aging actress as her own. The famous movie quote, "Fasten your seat belts, its going to be a bumpy ride," is from All About Eve. All About Even won Academy Awards for Best Pictures, Best Director for Joseph L. Mankiewicz,, Best Sound Recording, Best Screenplay, best Actor for George Sanders and Best Costume Design for Edith Head and Charles La Maire. Other actors in the film include Celeste Holm, Gary Merrill and Marilyn Monroe. All About Eve is a black and white movie.The public is welcome to join Richard Roeper as he introduces the opening night movie screening with a discussion that begins at 8:15 pm.
* July 22 at 8:51 pm. The Odd Couple - College Night. The Odd Couple is a film classic starring Lack Lemmon and Walter Matthau as a pair of mismatched roommates. Neil Simon wrote the funny story about fussbudget Felix who is separated from his wife and moves in with slob Oscar, a sportswriter. Jack Lemmon plays Felix Ungar and Walter Matthau plays Oscar Madison. 1968.
* July 29 at 8:44 pm. The Blues Brothers starring John Belushi and Dan Aykroyd The City of Chicago may be considered a co-star of the humorous film from Saturday Night Live veterans Belushi and Akyroyd. The Blues Brothers are Jake and Elwood, who put their blues band back together to save the Catholic home where they were raised. The film features great Blues performances by James Brown, Cab Calloway, Ray Charles and Aretha Franklin. 1980.
* August 5 at 8:35 pm. The Day the Earth Stood Still. Science Fiction classic starring Patricia Neal and Michael Rennie. A flying saucer lands in Washington D.C. An alien emerges and is immediately shot. The alien lives to warn the earth about violence, urging officers to end all wars. 1951. Before The Earth Stood Still, a short film, 'The Collector," will be shown.
* August 12 at 8:25 pm. Touch of Evil.This 1958 film stars Charlton Heston, Janet Leigh and Orson Welles. The film has been re-edited to follow the instructions that Orson Welles wrote in a long lost memo. The story is set in a Mexican border town. Charlton Heston is an upstanding federal agent up against a corrupt police chief, played by Orson Wells.
* August 19 at 8:15 pm. An Affair to Remember. Romance classic starring Cary Grant and Deborah Kerr. Cary Grant and Deborah Kerr play characters who meet and fall in love, but are each attached to other people. They make a plan to rendezvous at the top of the Empire State building in New York City. The story takes a dramatic turn as they endure trials and tribulations and find their way back to each other. 1957.
* August 26 at 8:03 pm. Grease. Teenage romance starring John Travolta and Olivia Newton-John. The story is about a good girl and bad boy who try to find ways to fit into each other's different worlds. The musical soundtrack features popular songs, such as "Hopelessly Devoted to You,","You're the One that I Want," "Summer Nights." :"Grease," the title song, is sung by Frankie Valli. Also in the film are Stockard Channing, Jeff Conaway, Michael Tucci, Didi Conn, Dinah Manoff, Eve Arden, Frankie Avalon , Joan Blondell, Kelly Ward, Barry Pearl and Sid Caesar. 1978.

Bring Along a Blanket, Snacks and Other Suggestions

The Chicago Outdoor Film Festival is an outdoor event. See classic films on the big screen under the summer skies at sunset in Grant Park. The City of Chicago has published a list of suggested items to bring along to make the festival more enjoyable. Suggestions include: blankets, snacks, cellphone,sandwiches, napkins or paper towels, chairs, popcorn, non-alcoholic beverages, plates, utensils, hand sanitizer, bug spray, trash bag, jacket or sweaters, camera. Bring along card games, board games or reading material to enjoy while waiting before the movie. Try to arrive in advance to get a good spot on the lawn.

2008 Guide to Chicago Movies in the Park

Every Tuesday after sunset in 2008 from July 15 to August 22, Chicago will show free movies on a 50-foot by 34-foot screen in Chicago's downtown Grant Park at 100 S. Lake Shore Drive. (It's south of Millennium Park, and north of the Art Institute).

What to bring:
• Blanket to lay on or chairs to sit upon.
• Blanket to wrap up in. It may get quite chilly at night!
• Munchies to delight the tastebuds
• Plastic alligators to protect your spot
• Drinks, but no alcohol. No booze in Chicago's parks, man.
• Items to pass the time: card games, book.
• Umbrellas (Films will be shown in rainy weather as long as lightning, strong winds or other severe conditions are not present.)

When to go:
• People start staking out their spots early As soon you get off work at 5pm. GO! Expect about 9,000 people to show up.

Where to sit:
• Just like a traditional theatre, don't sit too close to the front. Try for center.
• Watch out for dog poopies
• Sit behind people who have a blanket down and ask if they will be getting chairs later. Don't sit down with blank grass in front of you. People with chairs might arrive and block your view.
• If you bring chairs with you, try to sit in front of people with chairs. It's just common courtesy. Sit in front of people with a blanket and they will get pissed off at you. 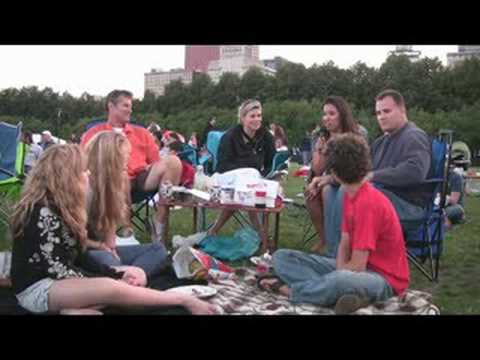