Following the final primaries on June 3, 2008, Obama had gained enough delegates to become the presumptive nominee.[266] In a speech before her supporters on June 7, Clinton ended her campaign and endorsed Obama, declaring, "The way to continue our fight now to accomplish the goals for which we stand is to take our energy, our passion, our strength and do all we can to help elect Barack Obama."[267] By campaign's end, Clinton had won 1,640 pledged delegates to Obama's 1,763;[268] at the time of the clinching, Clinton had 286 superdelegates to Obama's 395,[269] with those numbers widening to 256 versus 438 once Obama was acknowledged the winner.[268] Clinton and Obama each received over 17 million votes during the nomination process,[nb 10] with both breaking the previous record.[270] Clinton also eclipsed, by a very large margin, Congresswoman Shirley Chisholm's 1972 mark for most primaries and delegates won by a woman.[271] Clinton gave a passionate speech supporting Obama at the 2008 Democratic National Convention and campaigned frequently for him in Fall 2008, which concluded with his victory over McCain in the general election on November 4.[272] Clinton's campaign ended up severely in debt; she owed millions of dollars to outside vendors and wrote off the $13 million that she lent it herself.

Sen. Hillary Clinton formally ended her presidential campaign Saturday, saying to a packed house of thousands of supporters, "I will continue to stand strong with you every time, every place and every way that I can."

She urged the cheering crowd to support Illinois Sen. Barack Obama, the presumptive Democratic nominee, in his bid for the White House, saying she and supporters should "take our energy, our passion and our strength and do all we can to help elect Barack Obama ... I ask all of you to join me in working as hard for Barack Obama as you have for me."

Her endorsement was met with a scattering of boos and thumbs downs from the crowd at the National Building Museum in Washington. 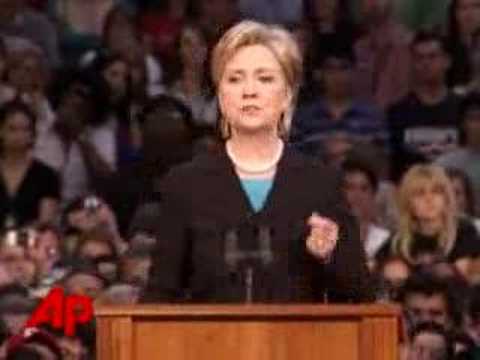