The Mayor's Office of Special Events has completed announcing the headliners for this year's festival:

Thursday, June 5: Guitarist and singer Johnny Winter will make his first appearance at the Chicago Blues Festival since the inaugural event in 1984. He'll be part of the opening night celebration of Muddy Waters on Thursday, June 5th, sharing the spotlight with "Superharp" James Cotton and others.

Friday, June 6: The Queen of the Blues, Koko Taylor (joined by her Blues Machine) headlines on Friday night, along with a set by Eddy "The Chief" Clearwater. There will also be a tribute to the past with a set featuring Ruby Andrews, Cicero Blake and Jackie Ross.

Saturday, June 7: Buckwheat Zydeco will headline on Saturday. The 60-year-old accordionist will bring one of the classic sounds of New Orleans to the stage. Also appearing that night will be Chicago favorite Lil' Ed & The Blues Imperials, the 2007 Band of the Year at the Blues Music Awards.

Sunday, June 8: Just announced to close the festival on Sunday June 8th will be the legendary B.B. King, making his first appearance at the festival in over 20 years. Other headliners on the final night include keyboardist Little Willie Littlefield, guitarist Bobby Parker and vocalist Karen Carroll, who performs with Charlie Love and Lurrie Bell.

I was busy this week, so I missed the Thursday and Friday performances at the 25th Chicago Blues Festival. I did make it there on Saturday, and walked about, checking out a few acts. The rain fell at about 4:45, so I left (I had a gig Saturday night and had to leave anyway). It rained again on Sunday, so I wussed out and stayed home. Shame on me. I caught some interesting stuff on Saturday, though.
The Juke Joint Duo - Cedric Burnside and Lightnin' Malcolm: Malcolm and Cedric are pictured at the top of this post. These guys ripped up the fest on the Mississippi Juke Joint Stage. They are, indeed, from Mississippi, and Cedric is the grandson of the great R.L. Burnside. These are young cats, doing that awesome drone-style North Mississippi blues made popular by the Fat Possum Records crew. Their "special sauce" was unison vocals - an eerie, keening sound that really worked well with the beats laid down by Cedric and the riffs pounded out by Malcolm. They had some intense energy, very much a hip-hop vibe. Thumbs up for these two!

Steve Arvey - Mr. Arvey is my friend and he is a fantastic guitarist. He was playing an acoustic set at the Maxwell Street Corner stage. Steve has left Chicago now; he spends most of his time in Florida where he says there is quite a bit of work for blues musicians. His set at Blues Fest was relaxed and quite interesting; I got the feeling that he had not played frequently with this group of back-up musicians. The set had a bit of a jam session feel to it (not that there is anything wrong with that). An interesting participant in the set was a blues harmonica player from Spain, Quique Gómez. Quique is a nice young man who has solid Chicago blues harp chops. The name of his band in Madrid is "Juan Bourbon, Juan Scotch, Juan Beer" HA! I love it.

Bumblebee Bob: Bumblebee Bob Novak is one of the Chicago blues guys that never got the attention he deserved. His music was stripped down, raw Chicago blues in the tradition of Hound Dog Taylor. A fine harmonica player, guitarist and vocalist, he is known for his work with the Chicago Slim Blues Band and his own group, Bumblebee Bob and the Stingers. Bob also played with pianists Sunnyland Slim and Erwin Helfer. He was the son of Russian immigrants and fell in love with the blues on Maxwell Street; he got into it before the "white college kid crowd" (Butterfield, Bloomfield, et al). Bob is also a fabulous painter (grad of the School of the Art Institute of Chicago, 1958) and has had many one-man shows at high-end galleries. - he also designed the Chicago Blues Fest posters for many years. I was really looking forward to seeing Bob, but it was not to be - he fell ill before the fest and was in intensive care, not doing very well. His band carried on, and my friend Tom Albanese played harp and sang a few tunes in Bob's absence. It was very entertaining, but sad. Bumblebee Bob is 75 years old now....looks like he is reaching the end of his road. Tough year for harp players - Little Arthur Duncan is struggling after brain surgery, now Bob is struggling, too. Say a prayer, people.

I saw some other acts, notably part of Otis Taylor's "Recapturing the Banjo" set. But these three acts took up most of my short visit.

It is always great to hit the Chicago Blues Festival - the fans are really into the music and there is great respect for the musicians. Too bad the folks in Chicago don't always give these great blues players the props they deserve during the rest of the year... 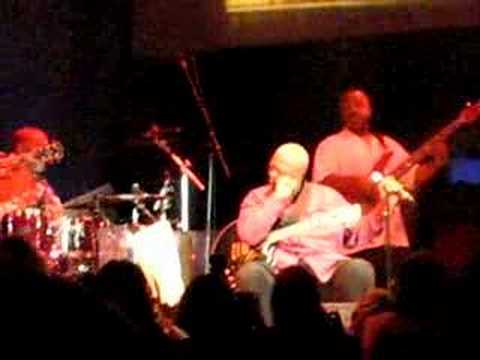 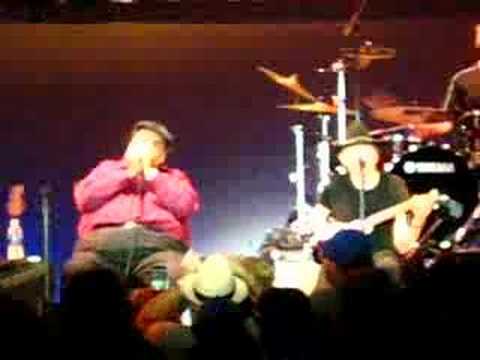 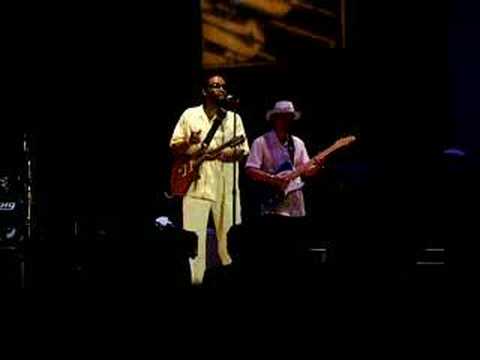 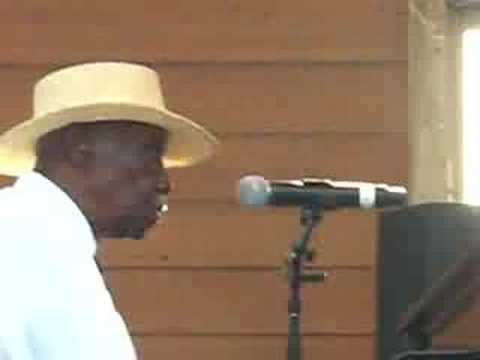