The 2008 Stanley Cup Final determined the winner of the Stanley Cup and the champion of the National Hockey League (NHL) for the 2007–08 season.

This was Pittsburgh's third appearance in the Stanley Cup Final, and its first since winning consecutive championships in 1991 and 1992. Detroit made its 23rd appearance in the championship series, and its first since winning the Cup in 2002. This was Detroit's 11th Stanley Cup title. This was also the first Cup Final between two United States-based NHL teams since 2003. The 1993 Montreal Canadiens remain the last Canadian team to have won the Cup.

The Detroit Red Wings entered the Final after winning the Presidents' Trophy as the team that had the best record during the regular season. Led by forwards Henrik Zetterberg, Pavel Datsyuk, and Johan Franzén, Detroit scored 55 goals in the first three rounds of the playoffs. With struggling goaltender Dominik Hasek being replaced mid-series by Chris Osgood, the Red Wings defeated their division rival Nashville Predators in the Western Conference Quarterfinals, in six games. The team swept the Colorado Avalanche in the Western Conference Semifinal round, and defeated the Dallas Stars in six games to win their fifth Clarence S. Campbell Bowl in franchise history.

The Pittsburgh Penguins entered the championship series after winning the Atlantic Division and earning the second-best regular season record in the Eastern Conference. The team was led by Sidney Crosby; missing 29 games throughout the regular season because of an ankle injury, the captain returned to lead the first three rounds of the playoffs in assists, and to tie for the lead in points heading into the Stanley Cup Final. Goaltender Marc-Andre Fleury recorded three shutouts throughout the playoffs, to lead the league in that category. Evgeni Malkin and Marian Hossa each recorded nine goals and ten assists throughout the playoffs. The Penguins swept the Ottawa Senators in the Eastern Conference Quarterfinals, a reversal of the series of the previous season when Ottawa beat Pittsburgh 4–1. In the Eastern Conference Semifinals, the Penguins defeated division rival the New York Rangers, in five games. The team won the Prince of Wales Trophy by defeating another division rival, the Philadelphia Flyers, also in five games.

Wings win the Cup their way

Give 'em credit. The Red Wings know how to keep things interesting.

After blowing their first chance to finish off the never-say-die Pittsburgh Penguins in the waning seconds of Game 5, the Wings almost gave away Wednesday's Game 6 in even more dramatic fashion. Marian Hossa's desperation-backhand bid got by Chris Osgood's outstretched glove, but slid harmlessly through the crease as time expired, leaving intact Detroit's 3-2 win and allowing the Wings to celebrate their 2008 Stanley Cup championship.

The thrilling finish -- Pittsburgh pulled within a goal when Hossa deflected a Sergei Gonchar blast with less than 90 seconds on the clock -- stood in counterpoint to what otherwise was a grimly methodical game, in which the Wings executed their system to perfection, wearing down the young Penguins with their seamless checking.

PITTSBURGH -- Oil up the Winged Wheel, it's time for another victory parade.

Hockeytown is home to the Stanley Cup -- again.

For the fourth time in 11 seasons, the Detroit Red Wings are the Stanley Cup champions. They used experience and grit to knock out the young up-and-coming Pittsburgh Penguins on Wednesday night with a 3-2 victory in Game 6 of the finals.

Following in the footsteps of Gordie Howe and Steve Yzerman, new captain Nicklas Lidstrom led the Red Wings to the title. Detroit's 11th NHL championship team is the first in league history to be captained by a European. 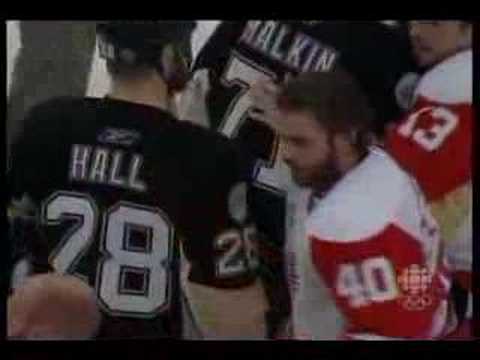