Train T195 was an express passenger train from Beijing to Sifang railway station in Qingdao.

It derailed at 04:38 China Standard Time (CST) on the inside (left) track around a bend due to excessive speed, at around 500 meters east of Wangcun Railway Station. In all, carriages No. 10-18 derailed on the scene. Those in carriages 1–9 were relatively unaffected. Train 5034 was a regular passenger train from Yantai destined for Xuzhou, coming from the other direction on the outside track at the regulated speed of 80 km/h. As the derailment of T195 became visible to the drivers, it was too late to stop the train. Train 5034 collided with the derailed cars at the K290+940 meters mileage marker on the double tracked Jiaoji Railway at approximately 04:41 CST, three minutes after the derailment of T195. At this point, cars 9-16 of T195 derailed and blocked the parallel track that Train 5034 was on. The first three cars of Train 5034 reportedly fell into a ditch.

As Train T195 derailed, it turned 90 degrees on its side. As most people were asleep during the time of the derailment, some only became aware after the incident had occurred. As passengers exited, many around the area were making frantic calls on their mobile phones, temporarily causing the crash of the local network.

The accident caused 72 fatalities and 416 injuries. It occurred when train T195 was on a section of the railway track undergoing maintenance ahead of the 2008 Olympics. The section was a temporary railway and the speed limit was 80 km/h (50 mph), but T195 was traveling at 131 km/h (81 mph).

The number of dead in China's worst rail disaster in a decade has gone from 66 to at least 70 and could rise further, according to the official Xinhua news agency.

Another 420 passengers were injured, 70 of them critically, when a high-speed train from Beijing to the seaside resort of Qingdao jumped the tracks early in the morning and hit a second train. Ten carriages plunged into a ditch.

The second train, heading from nearby Yantai to Jiangsu province, was derailed in the collision, which occurred in a rural area outside Zibo city in Shandong province.

One passenger, surnamed Zhang, said the train from Beijing was like a "roller coaster".

"It toppled 90 degrees to one side and then all the way to the other side. When it finally went off the tracks, many people fell on me and hot water poured out of their thermos flasks," said Zhang.

When Zhang escaped from the wrecked train, she saw many villagers had voluntarily joined the rescue work, some smashing train windows with farm tools to free trapped passengers. Others brought food and water from home. 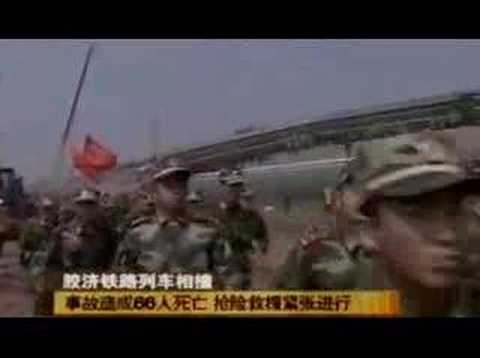