After scoring a combined 73 points in their regular season meeting, the teams scored a mere 10 points by the end of the third quarter, with the Patriots leading 7–3. The Patriots' record-setting offense gave up five sacks and one lost fumble, while the Giants' offense managed only five first downs in the second and third quarters. Yet in the fourth quarter, quarterback Eli Manning threw two touchdown passes, including the winning drive that culminated with a 17-yard touchdown to Plaxico Burress with 39 seconds remaining. The game marked the first time that a previously undefeated team had lost in a National Football League championship game since the 1942 Chicago Bears as the Patriots fell shy of their bid for a 19–0 campaign.

After calling tails to win the coin toss, the Giants started the game with the longest opening drive in Super Bowl history, a 16-play, 77-yard march that consumed 9 minutes, 59 seconds and featured four third-down conversions, the most ever on a Super Bowl opening drive. But New England halted the drive at their own 14-yard line, forcing the Giants to settle for a 32-yard field goal from Lawrence Tynes that gave New York a 3–0 lead.

New England then responded with its own scoring drive as Laurence Maroney returned the kickoff 43 yards to the Patriots' 44-yard line, after which he rushed twice for 15 yards. Quarterback Tom Brady then completed three passes for 23 yards, but after two incomplete passes, New England was faced with 3rd-and-10 on the Giants' 17. However, on that play, New York linebacker Antonio Pierce committed pass interference by striking the helmet of tight end Benjamin Watson in the end zone, giving New England 1st-and-goal at the 1. This set up a Maroney 1-yard touchdown run two plays later, the first play of the second quarter, for a 7–3 lead. The two teams each only had one drive in the entire opening quarter, a Super Bowl record.

On the Giants first drive of the second quarter, on 3rd-and-7, receiver Amani Toomer caught in a deep pass from Manning along the left sideline while dragging his feet in-bounds for a 38-yard gain, moving the ball to the Patriots' 19. But three plays later, Manning threw a pass that bounced out of the arms of rookie receiver Steve Smith and into the hands of cornerback Ellis Hobbs for an interception.

The Patriots' ensuing drive resulted in a three-and-out as on 3rd-and-1 James Butler and Michael Strahan tackled Maroney for a two-yard loss and New England was forced to punt.

Then on the Giants' next drive, rookie running back Ahmad Bradshaw fumbled a Manning hand-off and it looked as though Patriots' linebacker Pierre Woods had recovered the ball at the Giants' 30. But after the officials picked through the pile, it was determined that Bradshaw had made the recovery. The Giants maintained possession and wound up punting. New England's next drive ended with consecutive Giants' sacks, the first by linebacker Kawika Mitchell, the second by tackle Justin Tuck.

On the Giants' following drive, New York moved the ball to the New England 25, but linebacker Adalius Thomas sacked Manning and forced a fumble. Smith recovered the ball, however Bradshaw was penalized for illegally batting the ball forward before the recovery. The penalty pushed the Giants out of field goal range, and following an incompletion, they were forced to punt.

After the punt, two 18-yard receptions by Moss and Donté Stallworth moved the ball to the Giants' 44. But with 22 seconds left before halftime, Brady fumbled while being sacked by Tuck and defensive end Osi Umenyiora recovered the ball. The game then went to halftime with the Patriots leading 7–3.

On the first drive of the second half, New England had a 4th-and-2 and chose to punt. However, after the play had been run, Patriots' head coach Bill Belichick challenged that New York had too many players on the field and replay confirmed that was the case as Giants linebacker Chase Blackburn was unable to get to the sidelines as the ball was being snapped. Therefore, referee Mike Carey reversed the play, and the Giants were penalized 5 yards for having too many players on the field, giving the Patriots a first down. The Patriots then drove to the Giants' 25, but Strahan sacked Brady for a 6-yard loss on third down. Then on 4th-and-13, with the ball on the Giants' 31, Belichick decided against a long field goal attempt by Stephen Gostkowski and tried to pick up a first down instead. Brady's pass to Jabar Gaffney was incomplete as it went out of the back of the end zone and the Giants took over on downs.

On the Giants' first drive of the fourth quarter, Manning completed a 45-yard pass to rookie tight end Kevin Boss. Following three runs by Bradshaw and a 17-yard reception by Smith on third down, Manning finished the 7-play, 80-yard drive with a 5-yard touchdown pass to David Tyree, giving New York a 10–7 lead with 11:05 left in the game.

After consecutive three-and-outs by the Patriots and Giants, New England got the ball at its own 20 with 7:54 to play. Brady then completed a 5-yard pass to Wes Welker and a 10-yard pass to Moss, followed by a 9-yard run by Maroney to give the Patriots a first down at their own 44. Brady followed with a 13-yard pass to Welker, a four-yard completion to Kevin Faulk, and then a 10-yard pass to Welker for a first down at the Giants' 29. After that, Brady found Moss for an 11-yard completion and Faulk for a 12-yard completion and New England now had 1st-and-goal from the Giants' 6. Following two incomplete passes, New York cornerback Corey Webster slipped while backing into coverage, leaving Moss wide open in the end zone where Brady found him for a touchdown to give New England a 14–10 lead with 2:42 left in the game.

On the ensuing kickoff, Raymond Ventrone tackled Domenik Hixon after a 14-yard return, giving New York the ball on their own 17 with 2:39 left and three timeouts remaining. Following two receptions by Toomer for 20 yards, Brandon Jacobs kept the drive going with a 2-yard run on 4th-and-1. Two plays later, on 2nd-and-5, Patriots' cornerback Asante Samuel had a potential interception on a ball intended for Tyree that would have potentially ended the game go off his hands and out of bounds. This set up 3rd-and-5 for the Giants from their own 44 with 1:15 remaining. Manning spun out of the grasp of lineman Jarvis Green, righted himself, and threw a 32-yard completion to Tyree, who made a leaping catch while covered by Rodney Harrison and maintained possession by pinning the ball against his helmet with one hand as he fell to the ground. The amazing play (dubbed "The Helmet Catch") kept the drive alive. Three plays later, on 3rd-and-11, Manning found a wide-open Smith for a 12-yard gain to the New England 13, who stepped out of bounds to stop the clock. On the next play, the Giants sent four receivers into the pattern while the Patriots sent six pass rushers after Manning and flipped four pass defenders to the right side of the field—resulting in Patriots' cornerback Ellis Hobbs being isolated on the left side to cover Giants' wide receiver Plaxico Burress one-on-one. Hobbs bit on a fake slant inside (a "slant-and-go" or "SluGo" route) and Manning lofted a pass to the end zone where Burress caught the ball for a touchdown to complete the 12-play, 83-yard drive and give the Giants a 17–14 lead with 35 seconds left.

New England began its next possession on its own 26 with 29 seconds remaining and three timeouts, but the Giants' defense didn't allow a single yard, forcing an incompletion on first down, a 10-yard sack by rookie lineman Jay Alford on second down, and then two deep incomplete attempts to Moss, the first that was broken up by Webster, and the second of which, on 4th-and-20, was broken up by Giants' safety Gibril Wilson and caused a turnover on downs with one second remaining. After the incompletion, the game clock briefly read zero (one second was re-added), and coaches, players, reporters, and fans crowded the field as if the game had ended. Belichick hugged Giants' Coach Tom Coughlin at midfield, then left for the locker room. This early departure was later criticized by some sportswriters.

The officials cleared the field, and restarted the clock. Manning took a knee, allowing the clock to expire, and consequently sealed the historic Super Bowl XLII championship for the Giants, while also ending the Patriots' prospects of a 19–0 season.

GLENDALE, Ariz. -- There was a palpable expectation of history here on a chilly night in the Arizona desert. Super Bowl XLII delivered on that score, but history of a different sort than predicted was made Sunday.

The Giants, 12-point underdogs, ruined the New England Patriots' quest for a perfect season. New York, which lost six of 16 games in the regular season, prevailed 17-14 at University of Phoenix Stadium.

Quarterback Eli Manning, the game's MVP, lofted a regal, floating 13-yard pass to Plaxico Burress -- over Patriots cornerback Ellis Hobbs --- to put the Giants over the top with 35 seconds left. 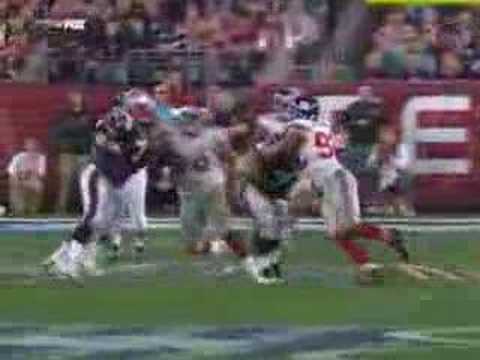