Senator Robert Byrd Admitted to Hospital After Falling at Home

On February 26, 2008, Byrd was admitted to Walter Reed Army Medical Center for observation following a fall at his home the day before.

Byrd attended Senate sessions on that day, but complained of pain and his aides asked him to see the Capitol physician before he went to the hospital

Sen. Robert Byrd, the Senate's longest-serving member, was admitted to Washington's Walter Reed Army Medical Center for observation Tuesday after a fall at his home Monday night, his spokesman said.

The 90-year-old West Virginia Democrat complained about pain after going to work Tuesday, and doctors are looking for signs of broken bones or other injuries, Byrd spokesman Jesse Jacobs said.

Byrd had cast a vote on the Senate floor and was back in his office working when aides recommended he see the Capitol physician, Jacobs said.

Robert Byrd, the oldest member of the U.S. Senate and a fierce opponent of the Iraq war, was being treated in a hospital on Tuesday after falling in his home late on Monday, a spokesman for the senator said.

The 90-year-old Byrd complained of back pain while at work in the Senate on Tuesday, spokesman Jesse Jacobs said. After being examined by a Capitol physician, the West Virginia Democrat went to Walter Reed Army Medical Center in Washington for tests and observation, Jacobs said. He was expected to remain in the hospital overnight.

Sen. Robert Byrd of West Virginia was hospitalized Tuesday at Walter Reed Army Medical Center after complaining of back pain after a fall at his home, his spokesman said.

Byrd, 90, the Democratic chairman of the Senate Appropriations Committee and the nation's longest-serving senator, was staying in the hospital overnight for observation, said spokesman Jesse Jacobs. It was not immediately clear whether he had suffered broken bones.

Jacobs said Byrd fell at his Virginia home Monday night. He came to his office Tuesday and was on the Senate floor to vote for an Indian health bill. But after noticeably wincing in pain, Byrd's staff advised him to see the Capitol physician, who "smartly for a 90-year-old man advised him to go to Walter Reed for observation." 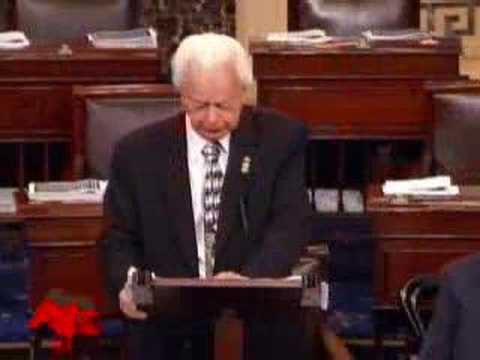