Call of Duty: World at War is a first-person shooter video game developed by Treyarch and published by Activision for Microsoft Windows, PlayStation 3, Wii, and Xbox 360.

It is the fifth installment in the Call of Duty series, excluding expansion packs. The game's setting returns to series' trademark World War II setting , after the previous title, Call of Duty 4: Modern Warfare was set in present day. It focuses on the Pacific Theater and Eastern Front of World War II for the Microsoft Windows, PlayStation 3, Wii, and Xbox 360 versions. The game was released in North America on November 11, 2008 and in Europe on November 14, 2008. A Windows Mobile version was also made available by Glu Mobile and different storyline versions for the Nintendo DS and PlayStation 2 were made, but remain in the World War II setting. The game is based on an enhanced version of the Call of Duty 4 game engine developed by Infinity Ward with increased development on audio and visual effects.

The narrative for the Microsoft Windows, PlayStation 3, Wii, and Xbox 360 versions focuses on the initial battles of World War II in the Pacific and Eastern Europe involving the United States, the Empire of Japan, the Soviet Union, and Nazi Germany. It is told from the perspectives of Marine Raider Private Miller and Red Army soldier Private Dimitri Petrenko and is based on several historical battles, including the Makin Island raid, the Battle of Stalingrad, the Battle of Peleliu, the Battle of the Seelow Heights, the Battle of Okinawa, and the Battle of Berlin. The multiplayer component of the game contains various game modes and a leveling system that allows the player to unlock additional weapons and rewards as they progress, similar to Call of Duty 4. A new feature to the series is the addition of a cooperative mode, which supports up to two players locally and four players online.

The game was the second best-selling game for November 2008 in the United States selling over 1.41 million units and sold twice as many units in the UK in its first week compared to Modern Warfare becoming the third fastest-selling video game in the UK. It received positive reviews, being praised for its portrayal of the gritty, dark side of war. It was also praised for the cooperative campaign and Nazi Zombies modes. However, it was criticized for not building on the success of Call of Duty 4. World at War currently holds an 85% aggregate score on Game Rankings and Metacritic. 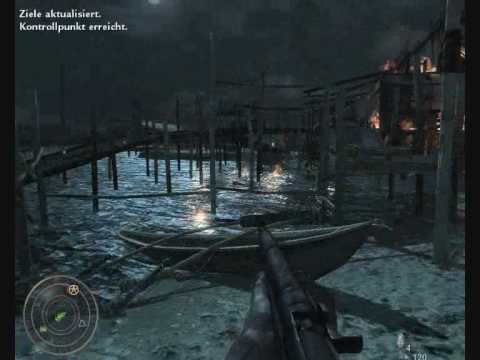