DaimlerChrysler introduced a new generation of the C-Class on January 18, 2007 and displayed it in the 2007 Geneva Auto Show.

Sales started on March 31, 2007 in almost all European countries. The new vehicle has an extended wheelbase and tracks, a stiffer bodyshell and a design inspired by the most recent S-Class and some hints from the CLS-Class.
The model has four trim levels of equipment - Classic, Elegance, Avantgarde and AMG, A high performance AMG version with a 6.2 L engine followed in September 2007, labelled C 63 AMG with 457 PS (336 kW; 451 hp) to rival the Audi RS4 and BMW M3. The Classic and Elegance lines retain the traditional Mercedes-Benz radiator grille, with a three-point star bonnet emblem. The Avantgarde line has a grille similar to that on Mercedes' sport coupe models, with two horizontal bars and a large centre-mounted star. In the UK the Classic line is known as the SE and the Avantgarde line is known as the C-Class Sport, and comes with an AMG bodykit, and AMG alloy wheels as standard. In the United States, the Classic is not sold, while the Elegance is known as the C-Class Luxury and the Avantgarde wearing the AMG sports package is known as the C-Class Sport. Both lines have an additional amber light in front of the front wheel well. In Canada, the Elegance (as just the C-Class), Avantgarde (Sport package), and AMG models are sold. Unlike the previous generations, the wagon version is no longer sold in North America.
There is a special system exclusive to this class, named 'Agility control' package, which through its unique concept provides drivers with excellent agility and ride quality. It achieves this feat through a hydro-mechanical set up, which constantly analyses road conditions and driving 'habits', resultantly it adjusts damper & suspension settings accordingly to provide the driver the best possible balance between ride comfort and agility. Buyers can opt for 'Advanced agility control' package. This system is an upgrade to the standard one, offering a 'sport' mode button.
Versions of the car are available with a choice of rear- and all-wheel drive (in the latter case an improved version of the 4MATIC system, not available in right-hand drive format), along with a variety of four and six-cylinder engines (and a 6.2 litre V8 in the C 63 AMG). Engines are the straight-4 M271 and V6 M272 petrol engines, straight-4 OM611 + OM651, and V6 OM642 Diesel engines. Most of the engines are from the W203 C-class, but the C 180K, C 200K, C 200 CDI & C 220 CDI derivatives have increased power outputs, also with improvements with respect to emissions and fuel consumption. In 2008 new generation V6's are expected to replace the current V6 powerplants. Six-speed manual transmissions are standard on all models (except the C 350),(7G-Tronic is available for C 230K, C 280, C 300, C 320 CDI and standard for C 350) and a five speed automatic transmission available for the four cylinder models. In the United States, the C 300 Luxury and C 350 Sport are only available with the 7G-Tronic transmission, and the C 300 Sport comes with a six-speed manual transmission, and the 7G-Tronic automatic transmission as an option. In Canada, 7G-Tronic automatic transmission comes with any 4MATIC model. The 4MATIC Models include C 230 4MATIC, C 300 4MATIC, and the C 350 4MATIC. The C 63 AMG comes with standard rear-wheel-drive.
The development of the W204 C-Class involved the use of a "digital prototype", which put a 2.1 terabyte digital replica of the car through a 15 million mile road course. This is an industry first which allowed for crash testing and more, before a physical prototype was actually constructed.
The Mercedes E-class coupe shares its platform with the C-class.

AMG model
The C63 AMG is reportedly the first AMG Mercedes designed from the ground up for performance, as compared to previous AMG cars which essentially featured "bolt on" performance modifications. The C 63 has a revised front end architecture that is taken from the CLK 63 AMG Black series. The revised 7-speed automatic transmission now has three shift modes - Comfort, Sport and Manual - with the last one running with the converter locked allowing the driver to hold the engine at the rev limit. The ESP can now be completely turned off, interfering only under heavy braking. The car also has the quickest, most responsive steering of any Mercedes to date. Car and Driver tested the car in their December 2007 issue and got a 0-60 mph time of 3.9 seconds and a quarter-mile time of 12.3 seconds at 116 mph (187 km/h). This made the C 63 the fastest 4-door production sedan in the world at its debut.

2007 saw the arrival of the third generation C-Klasse which was exhibited for the first time the same year at the Geneva Auto Show. Part of Mercedes-Benz's marketing strategy, sales in Europe began nearly instantaneously on March 31, 2007, leading to an even spread of the vehicle throughout various markets. Available in three trims, Classic, Elegance and Avantgarde, the latest C-Klasse comes with an optional "Agility package" comprising a complex hydro-mechanical system mated to the chassis and suspension which reconfigures the latter's settings for an optimum drive thanks to a series of sensors that pick up information about terrain, traction, speed and braking. 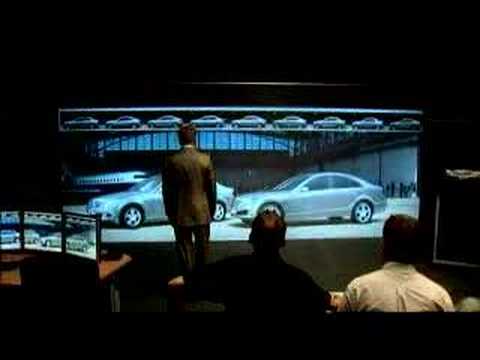 View other events that happened in 2007