On September 17, 2007,U.S. Senator John Kerry addressed a Constitution Day forum at the University of Florida in Gainesville, which was organized by the ACCENT Speaker's Bureau, an agency of the university's student government.

Toward the end of the question and answer period, university police removed Andrew Meyer, a 21-year-old fourth-year undergraduate telecommunications student, from the forum, restraining him and drive stunning him with a Taser.

Several videos of the episode were then posted on the Internet. The most viewed version of the video, shot by Kyle Mitchell of The Gainesville Sun, had more than 3.8 million views on YouTube by May 2009. The New Oxford American Dictionary listed "tase/taze" as one of the words of the year for 2007, popularized by the widespread use of "Don't tase me, bro!" The Yale Book of Quotations designated the same quote as the most memorable quote of 2007. Mick Jones, former guitarist for The Clash, wrote and published a song inspired from the event, "Don't Tase Me, Bro," and new wave band Devo use the quote in their song "Don't Shoot (I'm a Man)."

Transcript:
John Kerry: [Finishing the answer to the previous question]: "...and to continue to pile name upon name upon some wall in the future for a strategy that has failed. That's the distinction." [Recognizing and pointing to Andrew Meyer]: "Sir..."
Andrew Meyer: "I first and foremost want to thank you for your time. You spent a lot of time talking to us here today. I want to thank you for coming and being open and honest. You recommended a book to us earlier; I had wanted to recommend a book to you. It's called Armed Madhouse by Greg Palast.
Kerry: "Yeah, I have it, actually."
Meyer: "Yeah, he's a top investigative journalist in America."
Kerry: "I've already read it."
Meyer: "And [holding up a copy of a yellow paperback book, Armed Madhouse by Greg Palast], he says [in this book] you won the 2004 election...
Kerry: "Great."
Meyer: "Isn't that amazing! Isn't that amazing, you won in 2004! In fact, there were multiple reports, on the day of the election of disenfranchising of black voters...
Kerry: [Inaudible]
Meyer: [Officer Nicole Mallo places her left hand on the middle of Meyer's back] ...in Florida and Ohio."
Kerry: "So, what's the question? What's the question?"
[Police officer Nicole Mallo interrupts Meyer, saying "Ask your question."]
Meyer: [Turning to police officer Nicole Mallo] "I'll ask my question. Thank you very much. I'll ask my question. I'm going to preface it. He's been talking for two hours, I think I can have two minutes.
Kerry: "So, you want, you want to come up here?
Meyer: [Sarcastically to Mallo]: Thank you, thank you—thank you very much." [Officer Nicole Mallo continues to argue with Meyer who then turns to side] "I'm going to ask him my question. I'm going to inform people, and THEN I'm going to ask my question. So there were multiple reports of disenfranchising of black voters on the day of the election in 2004."
Kerry: "Right."
Meyer: "There was also voting machines, electronic voting machines in Volusia County, Florida that counted backwards. So, amidst all these reports of phony, bogus stuff going on, how could you concede the election on the day? [small applause] How could you concede the 2004 election on the day? In this book, it says there were five million votes that were suppressed and you won the election. Didn't you want to be President?
[Police officer interrupts Meyer, again saying "Ask your question."]
I'm not even done yet, I have two more questions."

Meyer: "If you were so against [attacking] Iran, how come you are not saying let's impeach Bush now? Impeach Bush now before he can invade Iran? Why won't we impeach him?! Impeach Bush! Clinton? Clinton was impeached, for what, a blow job?! Why don't we impeach Bush?! All right? [While speaking the next sentence, a young man in a suit makes a cutting motion with his hand, signaling for Meyer's microphone to be cut off] Also, are you a member, were you a member of Skull and Bones in college with Bush? Were you in the same secret [Meyer's microphone is cut off] society as Bush? Were you in Skull and Bones?" [turns to side and says, sarcastically]: "Thank you for cutting my mic. [turns to Senator Kerry and says] Thank you."
Kerry: "That's all right." "Let me answer his question."
[Police officers begin to seize Andrew Meyer and take him away.]
Meyer: Are you arresting me? Excuse me, excuse me, what are you arresting me for? Whoa, whoa, whoa, whoa!" 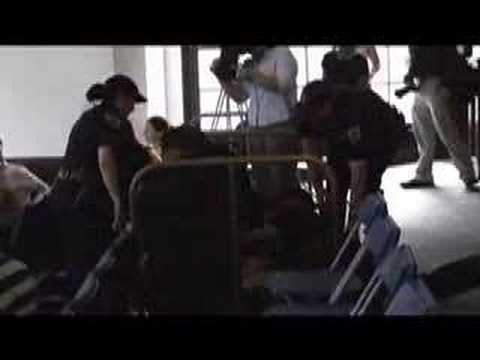 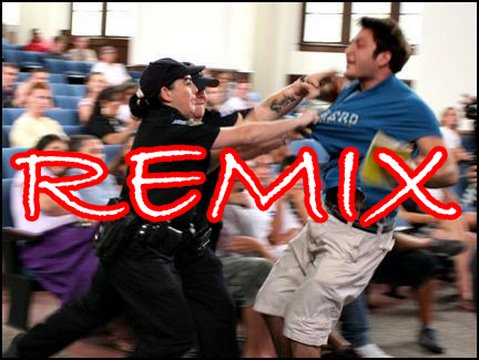 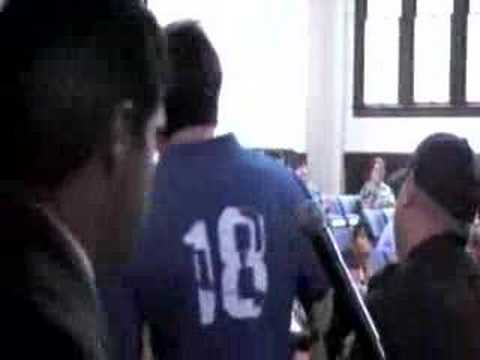