The magnitude 8.4 and 7.8 southern Sumatra earthquakes of September 12, 2007 occurred as the result of thrust faulting on the boundary between the Australia and Sunda plates.

At the location of these earthquakes, the Australia plate moves northeast with respect to the Sunda plate at a velocity of about 60 mm/year. The direction of relative plate motion is oblique to the orientation of the plate boundary offshore of the west coast of Sumatra. The component of plate-motion perpendicular to the boundary is accommodated by thrust faulting on the offshore plate-boundary. Much of the component of plate motion parallel to the plate boundary is accommodated by strike-skip faulting on the Sumatra fault, which is inland on Sumatra proper.

The September 2007 Sumatra earthquakes were a series of megathrust earthquakes that struck the Java Trench off the coast of Sumatra, Indonesia, three greater than magnitude 7. A series of tsunami bulletins was issued for the area. With a magnitude of 8.5, the most powerful of the series is the fifth largest earthquake ever recorded on a seismograph.

On Wednesday, September 12, 2007, a great earthquake struck off the southern coast of the island of Sumatra, killing at least 9 people and generating a relatively small tsunami. Two other major earthquakes struck later. A tsunami warning was issued for the immediate area and watches for adjacent regions. 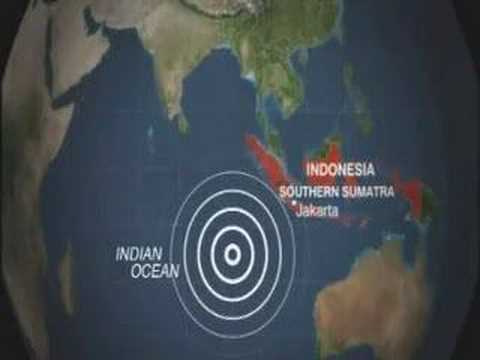