About 6:05 p.m. central daylight time on Wednesday, August 1, 2007, the eight-lane, 1,907-foot-long I‑35W highway bridge over the Mississippi River in Minneapolis, Minnesota, experienced a catastrophic failure in the main span of the deck truss.

As a result, 1,000 feet of the deck truss collapsed, with about 456 feet of the main span falling 108 feet into the 15-foot-deep river. A total of 111 vehicles were on the portion of the bridge that collapsed. Of these, 17 were recovered from the water. As a result of the bridge collapse, 13 people died, and 145 people were injured.

On the day of the collapse, roadway work was underway on the I‑35W bridge, and four of the eight travel lanes (two outside lanes northbound and two inside lanes southbound) were closed to traffic. In the early afternoon, construction equipment and construction aggregates (sand and gravel for making concrete) were delivered and positioned in the two closed inside southbound lanes. The equipment and aggregates, which were being staged for a concrete pour of the southbound lanes that was to begin about 7:00 p.m., were positioned toward the south end of the center section of the deck truss portion of the bridge and were in place by about 2:30 p.m.

About 6:05 p.m., a motion-activated surveillance video camera at the Lower St. Anthony Falls Lock and Dam, just west of the I-35W bridge, recorded a portion of the collapse sequence. The video showed the bridge center span separating from the rest of the bridge and falling into the river.

Emergency crews have resumed their recovery and clean up efforts at the scene of the Interstate 35W bridge that collapsed during rush hour Wednesday evening.

Authorities lowered the number of confirmed fatalities to four, but said they expect the number to change throughout the day.

Doctors at Hennepin County Medical Center said at a news conference this morning that 79 people were injured in the disaster.

One of them died around midnight of blunt force trauma, consistent with chest injuries from falling 64 feet.

The I-35W Mississippi River bridge (officially known as Bridge 9340) was an eight-lane, steel truss arch bridge that carried Interstate 35W across the Mississippi River in Minneapolis, Minnesota, United States. During the evening rush hour on August 1, 2007, it suddenly collapsed, killing 13 people and injuring 145. The bridge was Minnesota's fifth busiest, carrying 140,000 vehicles daily. The NTSB cited a design flaw as the likely cause of the collapse, and asserted that additional weight on the bridge at the time of the collapse contributed to the catastrophic failure.

Immediately after the collapse, help came from mutual aid in the seven-county Minneapolis-Saint Paul metropolitan area and emergency response personnel, charities, and volunteers. City and county employees managed the rescue using post-9/11 techniques and technology that may have saved lives. Within a few days of the collapse, the Minnesota Department of Transportation planned a replacement bridge, the I-35W Saint Anthony Falls Bridge. Construction was completed rapidly and it opened on September 18, 2008. 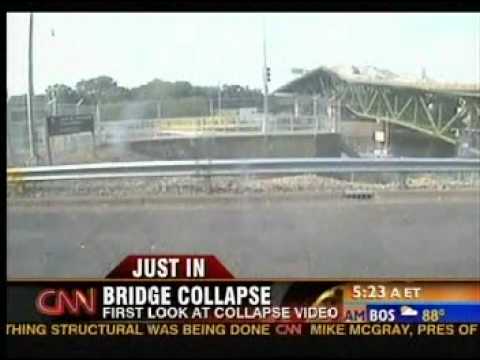 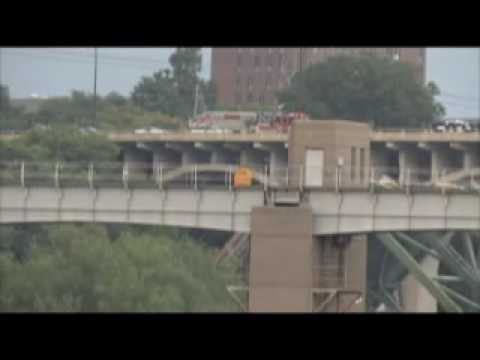