Harry Potter and the Deathly Hallows is the seventh and final of the Harry Potter novels written by British author J. K. Rowling.

Deathly Hallows is published in the United Kingdom by Bloomsbury Publishing, in the United States by Scholastic, in Canada by Raincoast Books, and in Australia and New Zealand by Allen & Unwin. Released globally in ninety-three countries, Deathly Hallows broke sales records as the fastest-selling book ever. It sold 15 million copies in the first twenty-four hours following its release, including more than 11 million in the U.S. and U.K. alone. The previous record, nine million in its first day, had been held by Half-Blood Prince. The Deathly Hallows has also been translated into numerous languages, including Ukrainian, Swedish, Polish and Hindi.

The launch was celebrated by an all-night book signing and reading at the Natural History Museum in London, which Rowling attended along with 1700 guests chosen by ballot. Rowling toured the USA in October 2007, where another event was held at Carnegie Hall in New York with tickets allocated by sweepstake.

Scholastic Inc., the American publisher of the Harry Potter series, launched a multi-million dollar "THERE WILL SOON BE 7" marketing campaign with a 'Knight Bus' travelling to forty libraries across the United States, online fan discussions and competitions, collectible bookmarks, tattoos, and the staged release of seven Deathly Hallows questions most debated by fans. 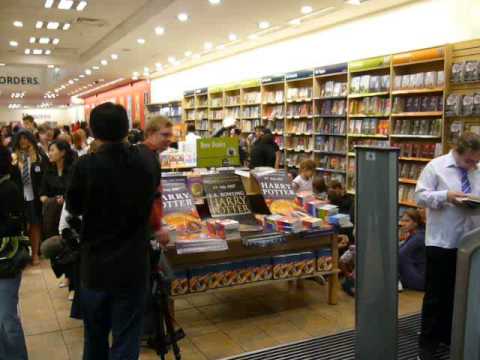