The 2007 Stanley Cup Final was the 2007 edition of the final series of the National Hockey League's Stanley Cup playoffs.

Prior to the season, the Ducks had been the pick of many in the media to make it to the Finals, and they did not disappoint. The second-seeded Anaheim Ducks defeated both the Minnesota Wild and Vancouver Canucks in five games before defeating the Detroit Red Wings in six games in the Western Conference Finals. The Ducks had the most penalties out of any team during the post-season and had one suspension going into the finals, but had a top penalty-kill percentage. They were led by two Norris Trophy candidates Scott Niedermayer and Chris Pronger, the scoring touches of Andy McDonald, Teemu Selanne, Ryan Getzlaf, and the goaltending of Jean-Sebastien Giguere. The Ducks were looking to shut down Ottawa's offense with the checking line of Rob Niedermayer, Samuel Pahlsson and Travis Moen, and overall team defence.

The fourth-seeded Ottawa Senators defeated the Pittsburgh Penguins, and upset both the New Jersey Devils and Buffalo Sabres, all in five games apiece, en route to their first Eastern Conference championship. Ottawa was led by the top line of captain Daniel Alfredsson, Dany Heatley, and Jason Spezza, who combined for 23 goals in the first three rounds, and the goaltending of Ray Emery. Other Senators who played pivotal roles were forwards Mike Fisher and Dean McAmmond and defensemen Chris Phillips and Anton Volchenkov. The Senators were looking to work past Anaheim's defense with their speed and higher-scoring offence, although both teams played a similar style of responsible team defence.

Anaheim had home ice advantage for the series, as they finished the regular season with 110 points to Ottawa's 105. The attention leading into the finals was Ottawa being "Canada's Team" despite Anaheim having five more Canadian skaters than the Senators. Many fans were saying that the Stanley Cup needed to be brought back to Canada after a 14 year drought (up to that point, the last time a Canadian team hoisted the Stanley Cup was done by the 1993 Montreal Canadiens, who defeated the Los Angeles Kings).

This was the Ducks' second appearance in the Final, having not been able to complete their Cinderella run of 2003, losing to the New Jersey Devils in 7. Only four players remained on the Ducks roster from 2003, including the Conn Smythe Trophy winner, Jean-Sebastien Giguere. The 2003 club's general manager, Brian Murray, was now the Ottawa head coach.

It was the first final for the Senators. Two Ottawa-area players were in the finals, playing for the Ducks.

The Senators and Ducks had never met in the playoffs before, and had not played each other since January 19, 2006, when the Ducks (then known as the Mighty Ducks) won 4–3 in a shootout in Ottawa.

Senators captain Daniel Alfredsson, from Sweden, was the first European-born-and-raised captain to lead his team to the finals. Previously, only Canadians or an American had captained teams in the Finals. The Ducks were captained by a Canadian (Scott Niedermayer) and had more Canadian players than the Senators.

The 2007 Final marked the third straight in which a Canadian franchise lost against a franchise based in the U.S. sunbelt (previous Canadian teams in the last few Stanley Cup Finals were the 2004 Calgary Flames and the 2006 Edmonton Oilers, and not counting the 2004–05 NHL season lockout).

The series marked the first time that two teams from the early-'90s expansion era faced each other in the Final. (Anaheim had started play in 1993, Ottawa in 1992)

It was the first Final since 1999 where neither finalist had won the Stanley Cup previously.

As well, this was the third season in a row that the Cup was won by a team winning its first Cup after Tampa in 2004 and Carolina in 2006.

The third game, in Ottawa on June 2, was attended by 91-year old Russell Williams as a guest of the Senators. He had attended the last Finals game in Ottawa (April 13, 1927) versus the Boston Bruins in the old Ottawa Auditorium. His presence was a good-luck charm; as Ottawa won the game he attended.

ANAHEIM, Calif. -- The Anaheim Ducks were born on the silver screen and came of age by capturing the shiniest of silver cups.

They dropped the mighty from their name, but not their game and skated off with the first Stanley Cup championship in California history.

The 14-year-old Ducks captured the NHL title with a 6-2 victory over the Ottawa Senators on Wednesday night, ending the series in five games in front of the home folks again.

For the first time, the Stanley Cup can enjoy an NHL western home, and the Ducks' victory came at the expense of Canada. The cherished trophy was born in Ottawa, but no team north of the border has won it since Montreal in 1993.

How sweet it is!

ANAHEIM – The Ducks threw the ultimate hockey party Wednesday night, with the guest of honor — the Stanley Cup — arriving exactly on cue.

The Stanley Cup landed in the arms of team captain Scott Niedermayer, courtesy of NHL commissioner Gary Bettman, shortly after the Ducks completed a decisive 6-2 triumph over the Ottawa Senators and confetti rained on 17,372 standing-room-only revelers at Honda Center.

By capping a five-game series victory over Ottawa, the Ducks became the first California team to win the Stanley Cup and the first from the West Coast to claim hockey’s biggest prize since the Victoria Cougars in 1925.

“I think we’ve been holding back on our emotions for the last couple of days,” Ducks coach Randy Carlyle said. “It’s kind of surreal at this point. You can’t really fathom that we got it done.” 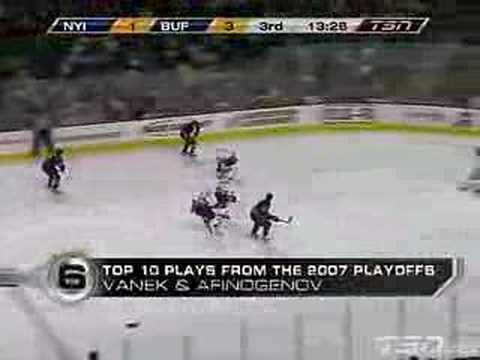 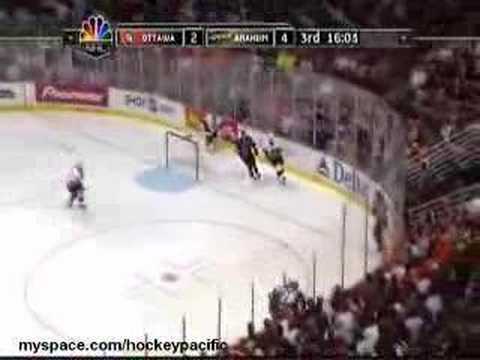 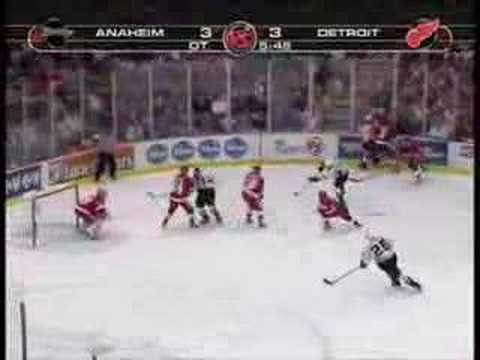