First half The Bears won the coin toss and elected to receive.

For the first time in Super Bowl history, the game was played in the rain, which was continuous throughout the game.

The rain did not hinder Bears' return man Devin Hester, who ran back the opening kickoff 92 yards for a touchdown to give Chicago the earliest lead in Super Bowl history. The Colts avoided kicking to Hester for the rest of the game, allowing him only one punt return, and choosing to squib kick whenever Hester was in the deep kickoff return position.

On Indianapolis' first drive of the game, defensive back Chris Harris intercepted a deep, third-down pass from Peyton Manning and returned it 6 yards to the Bears' 35-yard line. However, Chicago could not gain a first down on their ensuing possession and they were forced to punt. After several short runs and passes, Manning beat the Bears' defense with a 53-yard touchdown pass to Reggie Wayne, cutting the Bears' lead to 7-6 after punter/holder Hunter Smith fumbled the snap on the extra point attempt. On the ensuing kickoff, Chicago tight end Gabe Reid fumbled Adam Vinatieri's bouncing kickoff while being tackled by Robert Mathis; Colts guard Dylan Gandy recovered the loose ball. However, on the next play, Indianapolis gave the ball back when running back Joseph Addai fumbled the handoff and Bears defensive end Mark Anderson recovered it.

On the first play after the turnover, Thomas Jones' 52-yard run moved the ball to the Colts' 5-yard line. Three plays later, Rex Grossman threw a 4-yard touchdown pass to receiver Muhsin Muhammad, giving the Bears a 14-6 lead. After forcing an Indianapolis punt, Chicago lost another turnover when Cedric Benson's fumble was recovered by Colts defensive end Dwight Freeney on the Bears' 43-yard line. Indianapolis subsequently advanced to the 36-yard line, but decided to punt rather than risk a 53-yard field-goal attempt.

Following a Chicago punt, Indianapolis drove 47 yards and scored with Vinatieri's 29-yard field goal to make the score 14-9. Chicago was forced to punt again on their next drive, and return man Terrence Wilkins returned the ball 12 yards to his own 42-yard line. Manning started out the drive with a 22-yard completion to Marvin Harrison. His next pass went to tight end Dallas Clark for 17 yards. Two more completions moved the ball to the Bears' 11-yard line, and then Dominic Rhodes took the ball to the end zone with three consecutive carries, the last one a 1-yard touchdown run to give his team a 16-14 lead with 6:09 left in the second quarter.

After another Chicago punt, the Colts advanced to the Bears' 36-yard line before defensive back Charles Tillman ended the drive by forcing and recovering a fumble from tight end Bryan Fletcher. But on the next play, Grossman fumbled a snap, and Colts defensive back Raheem Brock recovered the ball. Manning then led the Colts to Chicago's 17-yard line. With two seconds left, Vinatieri attempted a 36-yard field goal, but his kick sailed wide left, and the score remained 16-14 at halftime.

Wilkins returned the second half kickoff 26 yards to the Colts's 38-yard line. On the ensuing possession, Addai rushed five times for 25 yards and caught four passes for 19 yards as the Colts drove 56 yards in 13 plays and scored with a 29-yard field goal from Vinatieri, increasing their lead to 19-14. On the Bears' next drive, Jones started out with a 14-yard run, and then Muhammad caught a 9-yard pass, bringing up second down and one on the Colts' 45-yard line. But on the next play, Grossman was sacked for an 11-yard loss by Anthony McFarland. Then, on third down, he fumbled the snap. Grossman recovered the fumble himself, but the Bears were forced to punt, and Wilkins returned the ball 12 yards to the Colts' 36-yard line. Rhodes then gained 52 yards on four carries, with a facemask penalty adding another 10. Chicago managed to halt the drive at their own 2-yard line, but Vinatieri kicked his third field goal to make the score 22–14.

Chicago tight end John Gilmore picked up Vinatieri's bouncing kickoff and returned it 9-yards to his own 45-yard line, with an Unnecessary Roughness penalty on Mathis adding another 15 yards and giving the Bears a first down on the Colts' 40-yard line. Chicago could only gain 14 yards on their ensuing possession, but it was enough for Robbie Gould to make a 44-yard field goal, cutting the score to 22-17. After an Indianapolis 7-play drive ended in a punt, Chicago started on their own 20-yard line with 13:38 left in the game. But four plays later, Colts defensive back Kelvin Hayden intercepted a pass intended for Muhammad and returned it 56 yards for a touchdown.

From that point on, the Colts took over the game. Four plays after the ensuing kickoff, Colts defensive back Bob Sanders intercepted Grossman's pass and returned it 38 yards to the Bears 41-yard line. Chicago's defense eventually forced a punt, but Smith's 32-yard kick pinned the Bears back at their own 8-yard line. The Bears drove to their own 47, but on a fourth down conversion attempt, tight end Desmond Clark dropped a potential first down reception after being leveled by defensive back Matt Giordano. The Colts subsequently called eight consecutive Dominic Rhodes runs before turning the ball over on downs themselves, leaving only 1:42 remaining in regulation. Five plays later, the game was over.

MIAMI (Feb. 4, 2007) -- Tony Dungy, beaming and sporting an NFL champions cap, waded through the mob on the soggy field until he found his quarterback, Peyton Manning.

And there they stood in the rain, the winning Super Bowl coach and the MVP, finally savoring a moment that was a long time coming.

A wet and wild night of Super Bowl firsts brought Dungy, Manning and the Indianapolis Colts to the top of the NFL with a 29-17 victory against the Chicago Bears. 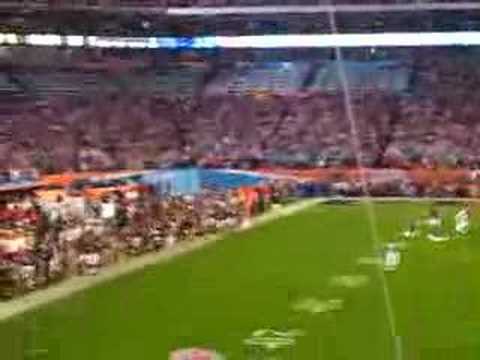