Florida QB Tebow is first underclassman to win Heisman NEW YORK -- Tim Tebow needed only two years of college to graduate to Heisman Trophy winner, putting the sophomore in a class by himself.

Florida's folk-hero quarterback with the rugged running style and magnetic personality won the Heisman on Saturday night to become the first sophomore or freshman to take college football's most prestigious award.

Since 1935, when Jay Berwanger of Chicago won the first Heisman, every winner had been a junior or senior -- until Tebow, who picked up quite a souvenir on his first trip to New York.

"I am fortunate, fortunate for a lot of things," Tebow said. "God truly blessed me and this just adds on. It's an honor. I'm so happy to be here."

Tebow defies history, runs away with the Heisman

NEW YORK -- Florida quarterback Tim Tebow became the first sophomore to win the Heisman Trophy the same way he scored his 22 rushing touchdowns this season. Tebow didn't tiptoe past the unspoken barrier. He smashed through it.

Upon hearing the announcement, Tebow -- sitting in the second seat off the aisle on the front row -- stood, turned and went back two rows to hug his parents, Pat and Bob, then hugged Gator coach Urban Meyer.

When Tebow ascended to the stage of the Nokia Theatre, former Florida quarterback Danny Wuerffel, one of his boyhood idols and the 1996 Heisman winner, greeted him with another hug.

"I think it's amazing that you're known forever as a Heisman Trophy winner," Tebow said. "That's very special. It's overwhelming. I'm kind of at a loss for words."

Despite the hatred I should have for any Florida Gator after last year's 41-14 championship debacle, I can't help but be happy for Tim Tebow.

With all of the venom directed at the BCS this week, it was encouraging to see this vote go the way it should have. Tebow set the SEC (a "rugged" conference according to Chris Fowler 8 different times) record for rushing touchdowns, had 51 total scores, and led the Gators to the #9 ranking heading into a should-be blowout of Michigan despite being a first year starter and having a subpar defense. Darren McFadden has to be pissed finishing second again, but he couldn't match what Tebow did. 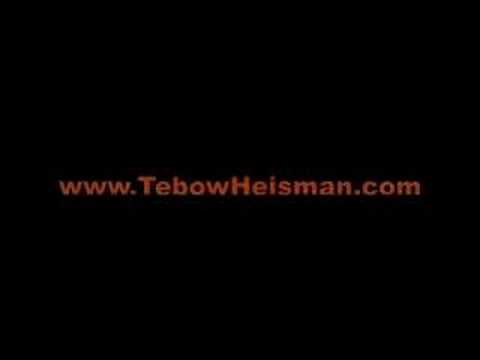