Clinton had been preparing for a potential candidacy for United States President since at least early 2003.[233] On January 20, 2007, Clinton announced via her web site the formation of a presidential exploratory committee for the United States presidential election of 2008; she stated, "I'm in, and I'm in to win."[234] No woman has ever been nominated by a major party for President of the United States. In April 2007, the Clintons liquidated a blind trust that had been established when Bill Clinton became president in 1993, in order to avoid the possibility of ethical conflicts or political embarrassments in the trust as Hillary Clinton undertook her presidential race.[235] Later disclosure statements revealed that the couple's worth was now upwards of $50 million,[235] and that they had earned over $100 million since 2000, with most of it coming from Bill Clinton's books, speaking engagements, and other activities.[236]
Clinton led the field of candidates competing for the Democratic nomination in opinion polls for the election throughout the first half of 2007. Most polls placed Senator Barack Obama of Illinois and former Senator John Edwards of North Carolina as Clinton's closest competitors.[237] Clinton and Obama both set records for early fundraising, swapping the money lead each quarter.[238] By September 2007, polling in the first six states holding Democratic primaries or caucuses showed that Clinton was leading in all of them, with the races being closest in Iowa and South Carolina. By the following month, national polls showed Clinton far ahead of any Democratic competitor.[239] At the end of October, Clinton suffered a rare poor debate performance against Obama, Edwards, and her other opponents.[240][241][242] Obama's overall message of "change" began to resonate with the Democratic electorate better than Clinton's message of "experience".[243] The race tightened considerably, especially in the early caucus and primary states of Iowa, New Hampshire, and South Carolina, with Clinton losing her lead in some polls by December.[244]

In the first vote of 2008, she placed third in the January 3 Iowa Democratic caucus to Obama and Edwards.[245] Obama gained ground in national polling in the next few days, with all polls predicting a victory for him in the New Hampshire primary.[246][247] However, Clinton gained a surprise win there on January 8, defeating Obama narrowly.[248] Explanations for her New Hampshire comeback varied but often centered on her being seen more sympathetically, especially by women, after her eyes welled with tears and her voice broke while responding to a voter's question the day before the election.[248][249] The nature of the contest fractured in the next few days, when several remarks by Bill Clinton and other surrogates,[250] and one remark by Hillary Clinton concerning Martin Luther King, Jr., and Lyndon B. Johnson,[nb 9] were perceived by many as, accidentally or intentionally, limiting Obama as a racially oriented candidate or otherwise denying the post-racial significance and accomplishments of his campaign.[251] Despite attempts by both Hillary Clinton and Obama to downplay the issue, Democratic voting became more polarized as a result, with Clinton losing much of her support among African Americans.[250][252] She lost by a two-to-one margin to Obama in the January 26 South Carolina primary,[253] setting up, with Edwards soon dropping out, an intense two-person contest for the twenty-two February 5 Super Tuesday states. Bill Clinton had made more statements attracting criticism for their perceived racial implications late in the South Carolina campaign, and his role was seen as damaging enough to her that a wave of supporters within and outside of the campaign said the former President "needs to stop."[254] On Super Tuesday, Clinton won the largest states, such as California, New York, New Jersey and Massachusetts, while Obama won more states; they almost evenly split the total popular vote.[255][256] But Obama was gaining more pledged delegates for his share of the popular vote due to better exploitation of the Democratic proportional allocation rules.[257]

The Clinton campaign had counted on winning the nomination by Super Tuesday, and was unprepared financially and logistically for a prolonged effort; lagging in Internet fundraising, Clinton began loaning her campaign money.[243][258] There was continuous turmoil within the campaign staff and she made several top-level personnel changes.[258][259] Obama won the next eleven February caucuses and primaries across the country, often by large margins, and took a significant pledged delegate lead over Clinton.[257][258] On March 4, Clinton broke the string of losses by winning in Ohio among other places.[258] Throughout the campaign, Obama dominated caucuses, which the Clinton campaign largely ignored organizing for.[243][257][260] Obama did well in primaries where African Americans or younger, college-educated, or more affluent voters were heavily represented; Clinton did well in primaries where Hispanics or older, non-college-educated, or working-class white voters predominated.[261][262] Some Democratic party leaders expressed concern that the drawn-out campaign between the two could damage the winner in the general election contest against Republican presumptive nominee John McCain, especially if an eventual triumph for Clinton was won via party-appointed superdelegates.[263] Clinton's admission in late March, that her repeated campaign statements about having been under hostile fire from snipers during a 1996 visit to U.S. troops at Tuzla Air Base in Bosnia-Herzegovina were not true, attracted considerable media attention and risked undermining both her credibility and her claims of foreign policy expertise as First Lady.[264] On April 22 she won the Pennsylvania primary, keeping her campaign alive.[265] However, on May 6, a narrower-than-expected win in the Indiana primary coupled with a large loss in the North Carolina primary ended any realistic chance she had of winning the nomination.[265] She vowed to stay on through the remaining primaries, but stopped attacks against Obama; as one advisor stated, "She could accept losing. She could not accept quitting."[265] She won some of the remaining contests, and indeed over the last three months of the campaign she won more delegates, states, and votes than Obama, but it was not enough to overcome Obama's lead.

WASHINGTON (CNN) -- Sen. Hillary Clinton jumped into the fray as a 2008 presidential candidate with the words "I'm in" posted on her Web site.

"And I'm in to win," she added in a statement, announcing she has set up an exploratory committee that can gauge opinions and raise money for a presidential campaign.

Clinton's announcement comes on the same day that the next president will be inaugurated two years down the road: January 20, 2009.

The former first lady and Democratic senator from New York is considered her party's front-runner in what has become a diverse Democratic field. (Watch Clinton's offer to chat with voters as she launches her White House campaign )

Should she win, she would be the first woman to serve as president of the United States -- and the first presidential spouse to do so as well. President Bill Clinton served two terms from 1993 to 2001.

Sen. Hillary Clinton, D-N.Y., has announced that she is forming an exploratory committee for president, thereby launching a bid to become the first female chief executive of the United States.

"As a senator, I will spend two years doing everything in my power to limit the damage George W. Bush can do," Clinton's statement added. "But only a new president will be able to undo Bush's mistakes and restore our hope and optimism."

While the timing of the news was a closely guarded secret, the announcement itself is not all together surprising. The junior senator from New York has been considering a presidential run for months. 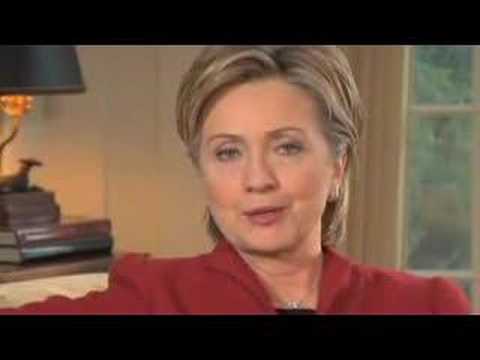