The Ford Edge is a premium mid-size crossover SUV (CUV) manufactured by Ford, based on the Ford CD3 platform shared with previous generation Mazda6 and marketed in slightly modified form as the Lincoln MKX. The platform is shared with Mazda CX-9 crossover (stretched), the Ford Fusion, Mercury Milan, and the Lincoln MKZ sedans. The Edge is the second to smallest of Ford's present crossover lineup as follows:
Ford Escape (compact crossover)
Ford Edge (mid-size crossover)
Ford Flex (full-size crossover)
Ford Explorer 2011 model year, to become a full-size crossover
As a crossover vehicle, the Edge bridges the gap between minivans like the now discontinued Freestar, and truck-based sport utility vehicles such as the Explorer. The Edge officially slots below the Flex in Ford's crossover SUV lineup.

The Edge made its public debut at the 2006 North American International Auto Show in January 2006, with production starting in the October 2006 as a 2007 model, with the first ones reaching dealerships just before December 25, 2006, because of a brief delay in production due to issues with the supplier.
The Edge implements Ford's front end design with a three bar chrome grille.
The Sport appearance package for the Ford Edge debuted at the 2008 Chicago Auto Show, with sales to begin as a 2009 model. It will come with standard all-body colored trim and 20-inch wheels. 22-inch wheels are an optional factory upgrade.

Ford Canada announced in June 2007, that a gasoline-electric hybrid version of the Edge will debut in the 2010 model year. The model is expected to use a new hybrid system from Ford, pairing an electric motor with a V6 engine.
Additionally, after public presentation in 2007, Ford has been carefully pointing at future production of its HySeries Edge. This is a hybrid electric vehicle that uses hydrogen fuel along with plug-in charging of its lithium-ion battery pack, for a combined range of over 320 kilometres (200 mi). The HySeries system was first introduced in the Ford Airstream concept from the 2007 Detroit Auto Show. A concept of the Ford Edge with the HySeries Drive was unveiled in the 2007 Washington DC Auto Show. The HySeries system is related to General Motors E-Flex platform. The E-Flex Platform was introduced in the 2007 Detroit Auto Show as the power train of the Chevrolet Volt concept.
This vehicle was featured in the James Bond film Quantum of Solace starring Daniel Craig as Bond, which was filmed in 2008. In 2002, starting with Die Another Day, (Pierce Brosnan as Bond) Ford and EON Productions agreed to a three film contract to have their vehicles displayed and/or used in the Bond movies. After Quantum of Solace, their contract expired.

seems that the days of the big boxy SUV might be numbered (at least temporarily). In the meantime, consumers are flocking to vehicles with SUV functionality and sedanlike handling characteristics. Ford's first attempt to hop aboard the "crossover utility vehicle" (CUV) bandwagon came in the form of the lackluster Freestyle. The cool, slickly styled Edge is Ford's second, and much more impressive, offering.

The Ford Edge is based on a lengthened and widened version of the Mazda 6 sedan platform and shares many of its mechanicals with the Mazda CX-9, including a strong V6 engine. Unlike its corporate cousin, though, the Edge is strictly a five-seater, as it doesn't offer a third-row seat. Otherwise, Ford's performance and features closely match competing midsize crossover SUVs. Although we have a few reservations about its braking performance and cabin materials, the Ford Edge is still worth a look for family-oriented buyers interested in a comfortable, all-around competent package.

The Ford Edge is a midsize crossover SUV available in four trims: SE, SEL, Limited and Sport. All are well equipped with standard features. Even the SE comes with air-conditioning, 17-inch alloy wheels, full power accessories, stability control and antilock brakes. However, in order to tap into most options, you'll have to step up to the SEL and Limited trims, which can be quite luxurious with all the bells and whistles. The Sport is similar to the Limited, but gives you big 20-inch wheels, unique bodywork and faux suede upholstery.

Powering the Ford Edge is a 3.5-liter V6 engine that's good for 265 horsepower. A six-speed automatic transmission comes standard, and all-wheel drive (AWD) is optional across all trims. It's a variable system that takes into account each driving situation to maximize efficiency. For example, at cruising speeds, an Edge with AWD will function like a front-wheel-drive vehicle to save fuel. At full throttle, between 50 and 60 percent of the power is automatically diverted to the rear wheels to negate wheelspin.

In the midsize crossover utility segment, third-row seats are becoming more popular. The Ford Edge lacks this feature, but counters with a roomy second-row seat. The rear seats also recline or fold forward (though not entirely flat) for increased cargo space. The Edge's maximum capacity is a bit lower than its key competitors'. Although functional and ergonomically sound in design, the interior lacks much in the way of design flair. Materials quality is average.

In road tests, our editors found that the Ford Edge provides good ride quality and decent handling dynamics. Acceleration is only adequate. Even with a solid 265 hp pumping and grinding under the hood, the Edge's heavy curb weight dulls acceleration past 60 mph. The automatic transmission lever also lacks any positions other than "D" and "L," which might annoy some drivers. While Ford has improved the Edge's previously horrible braking performance, it remains below average in the stopping department.

The Ford Edge was introduced for 2007. Originally it was available in SE, SEL and SEL Plus trim levels. We would avoid this first-year Edge because of its terrible braking performance. It would routinely take 160 feet to stop from 60 mph, whereas most vehicles in its class do it between 120 and 130 feet. That year also lacked the availability of Sync, a power liftgate and a navigation system.

In addition to the braking and equipment upgrades for '08, the Edge's SEL Plus trim was replaced by the Limited. The following year the Sport trim debuted, as did a significantly improved navigation system.

The Chicago Mercantile Exchange just announced that it is merging with the Chicago Board of Trade Company to create a “juggernaught” in the world derivatives market. These markets allow farmers to hedge their bets, insuring their crop at a given price for a future harvest. Automakers have no such luck. They pour billions of dollars into developing a product and gamble that it will succeed in the market place. Recent Death Watchee Ford has made such a gamble with its new crossover vehicle, the Edge. Some say it must sell, or FoMoCo will bust out. Ford’s betting the proverbial farm on red. But is the Edge a sure thing?

Looks-wise, the answer is maybe. Sporting a grill that would make Chad Johnson jealous, the Edge is as all up in your face as any vehicle on the road. The Edge even goes a step farther than the similarly blingtastic Fusion grinning with a huger chrome three-bar snout and wrap-round jeweled lights. The side view is a mish-mash of Nissan CUV’s past, with the front quarter panel aping Infiniti’s FX and everything from the A-pillar back looking very Murano, albeit with a touch of Acura MDX thrown in fo’ flavor. The rear is my favorite angle, subtlety working the best bits of family DNA (think Focus). The mean-looking trucklette rides on mirrored 18” wheels, attempting to tell all who see that even though the SUV is dead, it’s not.

The Edge’s interior is the biggest surprise; most pieces are straight up binnage (door handles and locks from the Mustang, waterfall jacked from the Freestyle), yet they are elegantly presented and surrounded with better-than-Ford-Average plastics. Marketing speak told tales of how the interior aesthetics were modeled after an urban loft. Never mind the fanciful rationalization, just color me pleased.

The seats are from Mazda’s CX-7. While they feel hopelessly out of place in a harder riding CUV, they are comfortable and appropriate here. The killer app: the Edge's epic front sunroof and rear moonroof, separated by only a foot of fabric. Both are best enjoyed from the cozy, reclining rear seats. Those who follow cars shows know that for more than a decade, manufacturers have been threatening to release a modestly priced ride with an all-glass top. Ford (nearly) delivers.

As the Edge sits on the same CD3 platform as the fine-handling Ford Fusion (a stretched and widened Mazda 6 platform), one would expect sporting pretensions if not outright sportiness. Ford apparently agrees with Frank Zappa that America is great because of our collective ignorance. The ride has been softened and frankly dulled. I’m not disagreeing with Ford or Frank; leaving the Edge tuned like a Zoom-Zoomer would only exacerbate our aching collective backs. On highways and suburban byways, where all Edges will live 99% of their easygoing lives, the ride is competent, compliant and downright pleasant. It is only on swooping, challenging back roads — where Ford’s PR wing elected to turn us loose — that ride sloppiness and handling limitations became apparent, and quick.

Luckily, the brakes are the same awesome stoppers found on the CX-7. The nanny is a hard mistress as she actually applied the brakes under full acceleration. Enthusiasts and wannabe enthusiasts might balk, but I guarantee the Edge will never dog Ford with Explorer-style rollover headlines. Besides, you can switch it off.

The go-pedal is connected to the new Duratec 3.5L 60-degree V6 found in the Lincoln Zephyr, er, MKZ. The 265hp and 250lbs.-ft of torque is enough to adequately motivate the 4200+ pound lil’ brute. Again, enthusiasts can decry the lack of power all day long, but for what the Edge wants to be (and who it wants to sell itself to) the mill is just fine. I did, however, decry the lack of oomph to my Ford peeps and asked why there is no SVT/SHO/HO/V8 version available for alpha male soccer marms. My query was met with knowing smiles and disingenuous shrugs. You read it here first.

The six-speed automated cog-swapper– the mechanical fruit of a joint venture with GM– is a winner. Ford claims 24mpg for the AWD Edge on the highway, which is good for an angled two-ton brick (though they were suspiciously silent about the around town numbers). Best of all, kick-downs will let the engine blast up to the 6,250rpm redline before shifting. We like that.

But do we like the Edge? Ford’s marketers mentioned a mythical man named “Phil” at whom the Edge is allegedly aimed. He’s 31, childless, active and on the go. In other words, he’s me. And I ain’t buying. If I wanted to sit in a highchair, I’d grab a CX-7. However, Element-owning Boomers who are tired of cruising PT just might snap-up the Edge up in droves. Ford’s sure hoping the roulette wheel comes up as red as their recent financial statements. Or Blazing Copper Metallic, to be more exact. 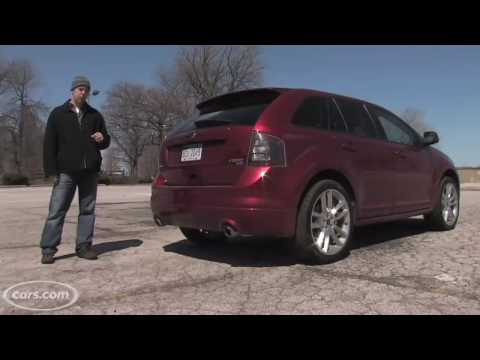