It's in the mid-80's, not a cloud in the sky, a backdrop of some of the world's most inspiring big-city architecture, and music in styles ranging from the gorgeous, "raining inside your mind" pop melancholia of Aqualung to the still uncompromisingly fierce rock of Sleater-Kinney. It must be Lollapalooza, the 2006 version! Seriously, all stops are out in this gathering of 130 artists on 8 stages in a 3/4 mile long runway tucked between Lake Michigan and the beauty of Chicago's skyline. A huge chunk of the world's greatest musicians have stopped by for this celebration of the world's popular music.

Highlights from day 1 included Panic! At the Disco (top right) bringing their top-of-the-charts post-grunge-meets-Vegas style to the stage and then surprising us by covering Radiohead's "Karma Police" and Smashing Pumpkins' gorgeous "Tonight, Tonight." British band the Editors, led by riveting frontman Tom Smith (top left), proved they are one of the world's top young rock bands and fully deserving of their Mercury Prize nomination. After a frustrating 15-minute delay in starting her show, Lady Sovereign's (bottom right) energy and blisteringly fast hip hop quickly helped those watching, and moving with the music, forgive and forget. Jack White's (of the White Stripes) current project the Raconteurs (bottom left), a self-described "band made up of old friends," took the stage in an electrifying swarm of guitars and feedback. If you love the Raconteurs' album Broken Boy Soldiers, you must see them live. Rock, with a pop heart, doesn't get much better than this.

With 8 stages, and at least 2 acts performing simultaneously at any particular point in time, there is a lot you miss at Lollapalooza. Fortunately, with the opportunity to catch significant portions of the performances of 10 or so acts a day, it's impossible to feel disappointed. Lollapalooza is gaining a reputation for selectivity so the music is uniformly excellent. I didn't happen upon any duds yesterday, and I don't expect that to happen in the 2 days to come. With acts from the Red Hot Chili Peppers and Gnarls Barkley to Kanye West and Matisyahu, I'm happily looking forward.

In many ways Lollapalooza just got bigger, better, and, yes, more festive on the second of three days. The crowd estimate was 60,000, just 10,000 more than Friday, but those in attendance will tell you the crowd felt much much larger than Friday. Although it was larger, the crowd continued to be friendly and, often, seemed in awe at just being part of such an event. Beyond the music, the various nooks and crannies filled with art, information on social causes, fantastic festival food, and, yes, shopping, insures a lack of boredom.

As for the music, I kicked my day off in the very early afternoon with an energetic performance from Britain's the Go! Team, and the day rarely let up from there. Australia's Wolfmother (top right) brought back the spirt of the 70's heyday of Black Sabbath and Deep Purple. Gnarls Barkley (top left), dressed in tennis whites, brought their "craziness" to the Grant Park crowd. The hip hop with a reggae injection style of Blackalicious caused crowds to stop on their way to something else and stream in to catch a few minutes with Tim Parker and Xavier Mosley.

The north end of the festival saw a glorious early evening of performances as Sonic Youth's still fierce independence gave way to the edgy punk cabaret of Dresden Dolls immediately followed by the grand chaos that is a Flaming Lips performance (bottom right). 4 12-foot tall inflated characters (Santa Claus, an alien, and 2 astronauts) joined superheroes, dancing Santa Clauses, space girls with alien masks, dozens of giant blue balls floating through the crowd, confetti, streamers, and Flaming Lips leader Wayne Coyne rolling through the crowd inside an inflated ball as part of the joyful chaos. When the Flaming Lips performance wound down, much of the crowd migrated en masse to the south end of the festival to catch the tight final few songs from the New Pornographers and then close out the night with a celebratory performance from hometown favorite Kanye West (bottom left).

One day remains for Lollapalooza 2006. It promises to be just as big as the previous two as long as the small threat of thundershowers holds off. I hope to start off my day in the Kidzapalooza area to see Lollapalooza founder Perry Farrell and punk legend Patti Smith entertain the young festival fans. By the time things wind down tonight with Red Hot Chili Peppers, I expect to be exhausted but filled with a tremendous set of memories of phenomenal musical performances while eagerly looking forward to Lollapalooza 2007.

Some of my favorite discoveries of the festival came on Sunday. Ireland's the Frames made the most of their hour of performance time in a trademark "whisper to a scream" style that was punctuated by an impromptu Beatle Bob interpretive dance performance. Nickel Creek were not new on my musical radar, but the trio's bluegrass-based virtuosity truly shines in concert. It's likely a safe bet that Nickel Creek's take on Britney Spears' "Toxic" was the only presence of Britney at Lollapalooza 2006. The riveting stage presence of lead vocalist Justin Warfield (top right) helped make the Joy Division-drenched style of She Wants Revenge memorable. Later in the day Canada's Broken Social Scene appeared truly inspired packing the stage with more than a dozen musicians insisting they "brought the whole band" for the event.

Headlining acts were also present and accounted for. The Jewish reggae of Matisyahu (top left) perfectly fit the mood of the sunshine-filled late afternoon in Chicago's Grant Park. Matisyahu's offering of a prayer for all of those involved in the events in Israel and Lebanon was one of frequent reminders during the weekend of an ongoing tragedy never far from the world's consciousness. Queens of the Stone Age (bottom left) powered their way through an hour-long set that proved to be a warmup for the Red Hot Chili Peppers, the festival's grand finale, and the only band to perform without competition from one of the festival's 7 other stages. Flea (bottom right), Anthony Kiedis, John Frusciante, and Chad Smith gave the crowd a rousing sendoff with their appropriately eclectic stew of musical styles from funk to pop, psychedelic rock, and almost everything in between.

After a grand weekend devoted to some of the world's greatest popular music, kudos must be given to the festival's organizers, Capital Sports and Entertainment, and to Perry Farrell for putting together such a stellar festival. Lollapalooza has risen again to take its place among the world's top musical events of the year. 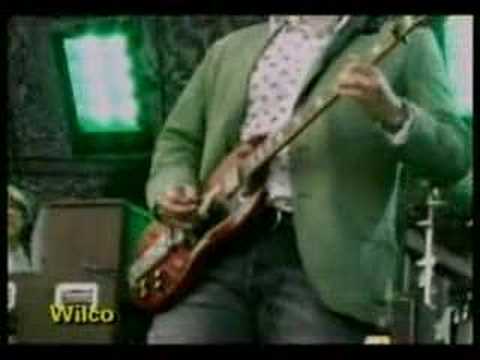 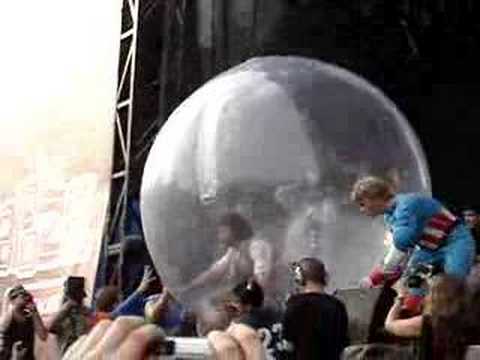 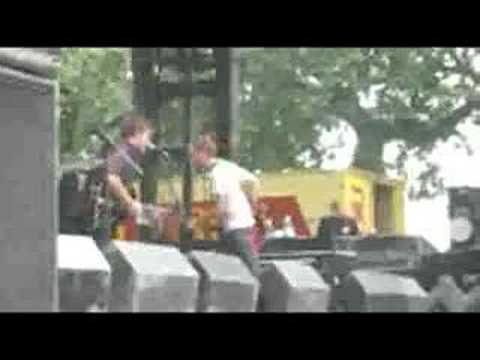 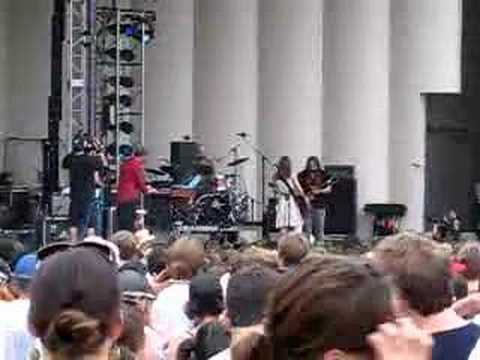