Italy beat France on penalties after the match finished 1–1 after extra time. France's Zinedine Zidane was sent off in his last-ever match, for headbutting Italy's Marco Materazzi's chest in retaliation to verbal insults.

Playing his last game before retiring, Zinedine Zidane's career ended in disgrace after he was sent off for crazily headbutting Marco Materazzi.

Zidane had put France ahead early on with a coolly-taken chipped penalty, before Materazzi levelled with a header from an Andrea Pirlo corner.

Italy took sole possession of second place in World Cup titles with four crowns after beating France on penalties 5-3 after a 1-1 scoreline following extra time. The final in Berlin was marred by France superstar Zinedine Zidane getting red carded after headbutting Italian Marco Materazzi in the final match of his illustrious career. 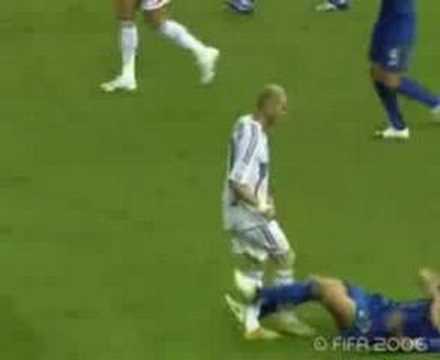