Edgar's fall (La caida de Edgar) is a video that was uploaded to YouTube in March 2006 from México.

The video features a young Mexican kid named Edgar and his cousin Fernando hiking in a ranch near their home town of Monterrey. The video starts with Edgar being afraid of trying to cross a small stream using two long branches as a bridge. Soon after Edgar starts crossing, Fernando starts moving one of the branches, making Edgar curse angrily with a funny Mexican "norteño" (northern) accent until he finally loses his balance, plunges into the stream and curses even more as he emerges from the water.

Edgar's fall was the subject of much media exposure in México which included newspapers and the clip being shown on the TV news.

There are ringtones, games, parodies, remixes and even a web page where Edgar is proposed for Mexico's presidency. There are over 20 versions of the video including Star Wars, Mario Bros, Street Fighter, and Pokémon. Some publicity campaigns have made use of the video without worries of copyright issues, for example Nike's Joga Bonito campaign. Edgar has also gained other media exposure, appearing on TV shows and in newspapers. 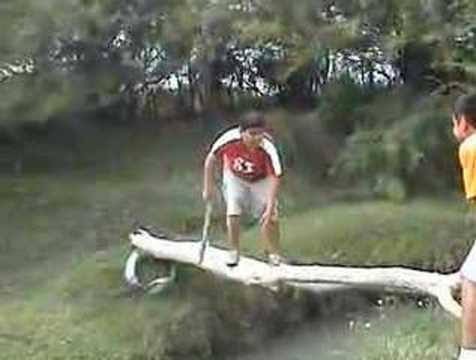