The 2006 NCAA Men's Division I Basketball Tournament involved 65 schools playing in a single-elimination tournament to determine the national champion of men's NCAA Division I college basketball as a culmination of the 2005–06 basketball season.

It began on March 14, 2006, and concluded with the University of Florida winning its first-ever national title over UCLA 73-57 on April 3 at the RCA Dome in Indianapolis, Indiana. Florida's Joakim Noah was named the Most Outstanding Player of the NCAA Tournament. The 2006 tournament was notable for George Mason University, an 11th-seed, defeating four consecutive higher seeds, including 1st-seeded Connecticut in a thrilling overtime regional final, to reach the Final Four, only the second time in tournament history that an 11th seed achieved this feat.

INDIANAPOLIS -- Six times in Monday night's national championship game -- and a record 29 times in this NCAA tournament -- Joakim Noah stretched one of his abnormally long arms into the air to send an opponent's shot caroming back to earth. With each deflection, he swatted away another truism.

Try telling that to America's newest superstar, the lanky 6-foot-11 sophomore with the ponytail.

Try telling it to the newest national champions, the sophomore-led Florida Gators.

Better yet, try telling it to the hapless UCLA Bruins -- or the George Mason Patriots, Villanova Wildcats and Georgetown Hoyas before them.

Gators clamp down on UCLA to win first NCAA title

The championship for Billy Donovan's team comes 10 years after Steve Spurrier led the Gators to a title in that "other" sport. Spurrier is long gone, and the days of Florida being only a football school appear to be, too.

"Our faculty rep said to me before the game that when you start with something from scratch and you build it up to win a championship, that's something special," said Donovan, now in his 12th year at Florida.

For 40 lopsided minutes, the Gators (33-6) were too big, too long and too quick for UCLA, which came up a win short of its 12th national title on a night legendary coach John Wooden watched from a hospital bed in LA after being admitted for an undisclosed illness that was said not to be serious.

Florida and Noah, voted most outstanding player in the Final Four, won by putting on a thorough display of versatility and unselfishness, a trademark of this team all season.

Jai Lewis hung the shreds of what remained of the basketball net around his thick neck. Lamar Butler, flashing a smile as wide as he is tall, tucked the string he had clipped from the net under the bill of his cap. Coach Jim Larranaga, 56, shimmied into a freshly printed T-shirt emblazoned with "Washington, D.C. Regional Champions," while delirious George Mason fans, their voices raw from screaming, snapped photos of the wild celebration with digital cameras and cellphones.

All of the detritus, no doubt, will be preserved for decades to come as mementos of the greatest day of their lives: The day the school in Fairfax pulled off one of the biggest upsets in college basketball history by toppling top-seeded Connecticut, a two-time national champion, to earn a trip to the NCAA men's basketball tournament's Final Four.

The Patriots, the team with a starting five from the Maryland suburbs that most pundits didn't think deserved a spot in the 65-team tournament, couldn't have earned the victory in more thrilling fashion -- storming back from a nine-point deficit at halftime and finally win, in their own backyard, no less, 86-84.

As a result, the Patriots' magic carpet ride sails on to Indianapolis, where the 11th-seeded upstarts will face Florida, victors yesterday over No. 1 seed Villanova, this Saturday for the right to play for college basketball's national title. 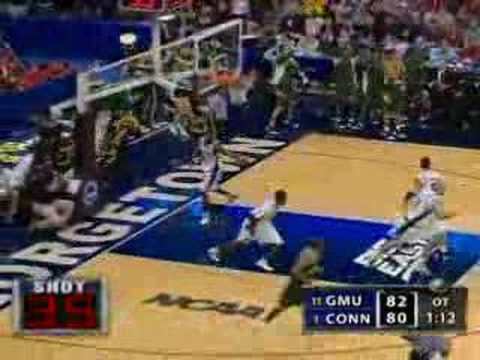 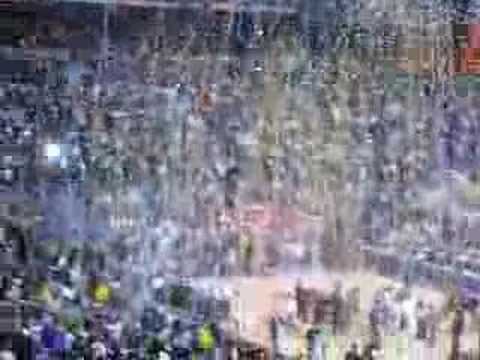 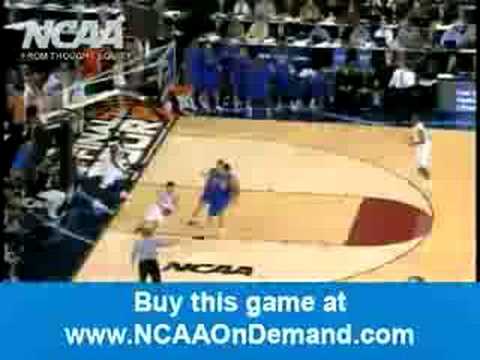