Quarterback Matt Hasselbeck then started off the drive with a pair of completions to receivers Darrell Jackson and Joe Jurevicius for gains of 20 and 11 yards, respectively. On the third play of the drive, Jackson caught a pass in the end-zone, apparently for a touchdown, but the play was nullified on a pass interference penalty on Jackson for pushing off his defender. Running back Shaun Alexander ran the ball the next two plays, but gained only three yards. Hasselbeck's third-down pass attempt fell incomplete, and the Seahawks were forced to settle for a 47-yard field goal by kicker Josh Brown. By the end of the first quarter, the Steelers had failed to gain a first down, and quarterback Ben Roethlisberger had completed one of five pass attempts for one yard. On their first second-quarter possession, Pittsburgh once more was forced to punt after three plays, but benefited from another Seahawks penalty, a holding call that nullified Warrick's 34-yard punt return. The Steelers forced a Seattle punt, but Seattle safety Michael Boulware intercepted a Roethlisberger pass at the Seattle 17-yard line on the ensuing drive. The Seahawks, though, were once more forced to punt after three plays, and Pittsburgh drove into Seattle territory on the following drive.

An offensive pass interference call against tight end Heath Miller and a sack for an eight-yard loss by Seahawks defensive end Grant Wistrom, though, backed the Steelers to the 40-yard line, and left the team facing a third-down-and-28. However, Roethlisberger hit receiver Hines Ward out of a scramble and extremely unorthodox, against the grain pass for a 37-yard gain to keep the drive going. Jerome Bettis carried the ball on the next two plays, taking his team to the one-yard line but not into the end-zone. On the third-down play, after the two-minute warning, Roethlisberger faked a handoff and dove into the end-zone himself.

On the strength of a 19-yard Jurevicius reception, Seattle advanced the ball to the Pittsburgh 36-yard line, but, after the drive stalled, Brown missed a 54-yard field goal attempt to the right and the Steelers ran out the clock to end the first half.

The Steelers took the ball to begin the second half, and just two plays in, running back Willie Parker broke through for a 75-yard touchdown run, giving his team a 14-3 lead and setting a record for the longest run in Super Bowl history, beating Marcus Allen's Super Bowl XVIII mark by one yard.

The Seahawks drove into Pittsburgh territory on the next drive, sparked by a 21-yard run by Alexander, but Brown again missed a field-goal attempt, this one from 50 yards, as Seattle was unable to close the 11-point deficit.

Pittsburgh drove 54 yards to the Seattle six-yard line to put themselves in position to take a large lead, but Seahawks defensive back Kelly Herndon intercepted a pass from Roethlisberger and returned it a Super Bowl record 76 yards to the Steelers 20-yard line. From there, the Seahawks required just two plays to score on Hasselbeck's 16-yard touchdown pass to tight end Jerramy Stevens, cutting their deficit to 14-10.

The teams exchanged punts (two from Pittsburgh, one from Seattle) to fill out most of the third quarter, but the Seahawks ended the quarter having driven from their own two-yard line to near midfield. The drive continued in the fourth quarter, as the Seahawks reached the Pittsburgh 19-yard line. An 18-yard pass to Stevens, though, was negated on a controversial penalty call against Seattle tackle Sean Locklear for holding, denying the Seahawks an opportunity for a first-down-and-goal from the 1-yard-line. Three plays later, Pittsburgh defensive back Ike Taylor intercepted a Hasselbeck pass at the 5-yard line and returned it 24 yards. While making the tackle on Taylor, Hasselbeck dove low and was flagged for blocking below the waist on an attempt to tackle. The penalty added 15 yards to the return and gave the Steelers the ball on their own 44-yard line.

On the ensuing possession, Hasselbeck ran the ball for eighteen yards and was briefly touched by Steelers linebacker Larry Foote as the former fell to the ground. Though the play was initially ruled a fumble, with the ball recovered by the Steelers, a Seahawks challenge proved successful, as officials ruled Hasselbeck to have been down prior to his having lost the ball; Seattle, aided by a 13-yard Jurevicius reception, drove to the Pittsburgh 48-yard line but could go no further; a Tom Rouen punt entered the end zone, giving the Steelers possession on their own 20-yard line.

Pittsburgh possessed the ball on for nearly four-and-one-half minutes on the ensuing drive, as Bettis carried seven times; Seattle was forced to use all of its three timeouts to stop the clock, but nevertheless had only 1:51 left when it took the ball from its own 20-yard line following a Gardocki punt. A 35-yard reception by Jurevicius took the Seahawks into Pittsburgh territory, and a 13-yard Bobby Engram reception took the team to within field-goal range, but dubious clock-management and play-calling left the team with just 35 seconds remaining; an incompletion and a three-yard pass to Stevens over the middle over the field consumed 26 seconds, and Hasselbeck threw incomplete near Stevens on fourth down, giving the Steelers the ball on downs with just three seconds left, after which a Roethlisberger kneel-down ended the game.

DETROIT (Feb. 5, 2006) -- Paint this Super Bowl black and gold. With a whole lot of satisfaction for Jerome Bettis, Bill Cowher and his Pittsburgh Steelers.

The final Bus stop featured a little trickery starring MVP Hines Ward, a bunch of help from the Seattle Seahawks and a huge boost from the Terrible Towels, a handful of football fortune that added up to "One for the Thumb."

The Steelers' 21-10 victory in the Super Bowl was their record-tying fifth, but the first since 1980 and the first ever for Bettis and Cowher. 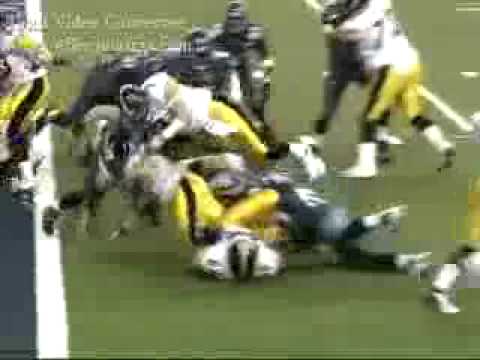