First launched in the 2006 model year, the Cayman is a coupé derived from Porsche's second generation Boxster convertible. Like the Boxster, most Caymans are assembled in Finland for Porsche by Valmet Automotive (the rest are assembled in Zuffenhausen near Stuttgart, Germany). Porsche's Deputy Chairman, Holger P. Haerter confirmed that their contract with Valmet Automotive will end in 2012, and the Cayman's production will be outsourced to Magna Steyr Fahrzeugtechnik of Graz, Austria. (Panorama, 2008)

After two years of development, the first model of the coupé to be released was the Cayman S (type 987.120). Photographs and technical details were released in May 2005, but the public unveiling did not take place until the September Frankfurt Motor Show. The S suffix (an acronym for Sport or Special) indicated that this was a higher performance version of a then unreleased normal model. That model, the Cayman (987.110), went on sale in July 2006. A motorsport-tuned model, the Cayman RS, is rumored to have been tested at the Nürburgring that same year.

The Cayman coupé (project 987c) and the second generation Boxster convertible (project 987) share the same mid-engined platform and many components, including the front fenders and trunk lid, side doors, headlights, tailights and forward portion of the interior. The design of the Cayman's body incorporates styling cues from two classic Porsches; the 550 Coupé and the 904 Coupé.[5][6] Unlike the Boxster, the Cayman has a large hatchback for access to luggage areas on top and in back of the engine cover. The suspension design is fundamentally the same as that of the Boxster, but features revised settings appropriate to the increase in chassis stiffness resulting from the Cayman's fixed roof.

A 5-speed manual transaxle is standard on the normal Cayman (G87.01), while a 6-speed manual (Getrag 466) is the default for the S (G87.21) and an option on the normal (A87.20). An electronically controlled 5-speed automatic transaxle (Tiptronic) is also available on the S (A87.21) and the non-S version (A87.02) (The 2009 models replace this option with a seven-speed "PDK", Porsche's dual-clutch robotic manual transmission). Other options include active shock absorbers (ThyssenKrupp Bilstein GmbH's DampTronic, rebadged as PASM by Porsche), ceramic disc brakes (PCCB), xenon headlights (Hella's Bi-Xenon) and an electronically controlled sport mode (Sport Chrono Package).

Almost exactly one mile long and slowly rotting away in the southern sun, the Autodromo di Bari is what they call a Mickey Mouse circuit--more corners than a spiral staircase, second- and third-gear stuff only, and one fairly long straight where you hit 110 mph at 7000 rpm before dropping the anchors, pronto. This is the place where Porsche has brought us to sample a Cayman S development mule equipped with PASM (Porsche Active Suspension Management, or, simply, adjustable dampers), PCCB (Porsche Ceramic Composite Brakes), and nineteen-inch wheels (which are an option).

For those of you who aren't Porsche diehards, the Cayman is essentially a Boxster with a steel coupe roof and a hatchback. Porsche claims that as a result of the steel surgery, torsional rigidity doubles. The Cayman also gets stiffer springs for its strut-type suspension, because, as Porsche's chassis gurus point out, you can use stiffer springs in a stiffer car without unduly affecting ride comfort. Damper rates stay effectively the same, but the Cayman has thicker antiroll bars. Eighteen-inch wheels will be shod with 235/40YR-18 front and 265/40YR-18 rear performance tires on the standard S. The Cayman in these photos wore Michelin Pilot Sport PS2s, but Porsche plans to use two or three different tire suppliers.

The 3.4-liter version of Porsche's M96 flat-six engine family from the Boxster and the 911 does duty here and is tweaked to deliver 295 hp and 255 lb-ft of torque, versus the 280 hp and 236 lb-ft in the Boxster S's 3.2-liter engine. (And versus the 325 hp in the 3.6-liter base 911 Carrera.) It propels the Cayman S from 0 to 60 mph in 5.1 seconds and on to a top speed of 171 mph. Porsche's famed test driver and former World Rally champ Walter Rhrl gets the Cayman S around the Nrburgring's Nordschleife track in eight minutes, eleven seconds, which is four seconds faster than a published time for the base 911 Carrera, again with Rhrl driving.

All of the Boxster's chassis systems, which themselves are largely shared with the 911, have, of course, migrated to the Cayman S, including PASM, which is an option, and Porsche Stability Management (PSM), which is standard. The Cayman also will be offered with the Sport Chrono package and its nifty lap-time counter built into the dash. Without PASM, Rhrl's trip around the 'Ring would be three seconds slower. The ceramic brakes are another option. At 13.2 pounds each, the ceramic brake discs are exactly half as heavy as the standard cast-iron units, but that particular decrease in unsprung weight also decreases your net worth by about eight grand. In general, the Cayman's brakes are identical to those of the Boxster, but Porsche modified the front dam to bring a bit more cooling air to the discs, and the ABS has been mildly tweaked.

Porsche today revealed the first official images of its anxiously awaited new sports car -- the 2006 Porsche Cayman S. Based on the Boxster® series, the two-seat coupe incorporates dramatic new styling, a powerful 295 hp (SAE) engine, and features and options made popular by Porsche's current range of sports cars. It is positioned and priced between the Porsche 911® Carrera® and Porsche Boxster S.

While easily recognizable as a member of the Porsche sports car family, the Cayman S has its own distinctive look. Among its unique styling features are its dynamic new coupe silhouette, aerodynamic upper windshield sill, curvaceous rear fenders, fog lamps integrated into the front air intakes, exclusively designed side air intakes, automatically extending rear spoiler, and newly styled dual sport tailpipes. Beneath the new model's distinguishing hatchback is a rear storage area twice the size (9.2 cu. ft.) of that found in the Boxster.

The Cayman S's muscular 3.4-liter, flat-six cylinder engine propels the car from 0 to 60 mph in a quick 5.1 seconds and to a top track speed of an impressive 171 mph. The engine is equipped with the same VarioCam® Plus variable valve timing system as found on the 2005 911 Carrera. It allows the engine to produce its maximum torque of 255 ft. lbs. between 4,200 and 6,000 rpm.

This engine power is transmitted through the Boxster S's standard six-speed manual transmission that has been enhanced for the Cayman S with shortened and more precise shift travel. Offered as an option, the five-speed Tiptronic® S automatic transmission system has been tuned specifically for the new model, incorporating unique electronic and hydraulic control maps.

Handling and safety are enhanced with the fitting of 18-inch wheels and tires and the Porsche Stability Management (PSM) system as standard equipment. The Porsche Active Suspension Management (PASM) system, which allows the driver to select between the comfort of a grand touring car and the track-ready precision of a genuine high-performance sports car at the touch of a button, is available as an option. 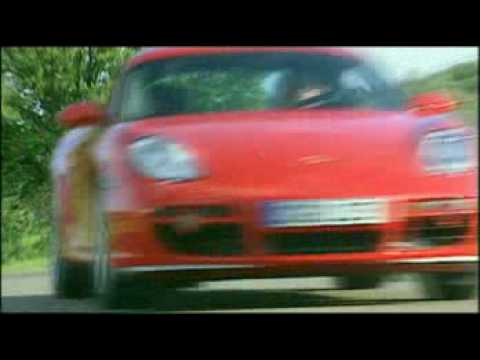