It is essentially an enlarged A-Class keeping the same engine and suspension system. Like the A-Class, and unlike any other vehicle Mercedes builds or has built, the B-Class is a front wheel drive vehicle.
Mercedes-Benz describes this vehicle as a Compact Sports Tourer instead of hatchback or multi-purpose vehicle, like its R-Class model, which is called a Grand Sports Tourer.
It was released in Europe in the late spring of 2005 and in Canada in the autumn of 2005. Plans to import the car to the US through Mexico were put on hold due to a strong euro, but it is likely that a new version of the car will come to the US in 2011.

Keeping in mind its United States' market in comparison with the A-Class and indeed emulating the R-Class, the aspect of the B-Class was stylized from the back to the nose. Some of the tiny stylistic details of the Baby-Benz (popular name of the A-Class) were removed. In particular, the front of the vehicle was lengthened (although maintaining the Sandwich anti-crash system).

The B-Class W245 maintains the sandwich floor concept.
The powertrain (engine and transmission) moves beneath the passenger cell (located at high seating position) in the event of a big frontal impact. According to a study: "the front section of the A-Class would have to be considerably longer in order to offer the same impressive level of occupant safety in the event of a heavy frontal impact".
These are two innovations, patented by Mercedes-Benz as:
DE 43 26 396 C 2: motor car with drive unit tilted at an acute angle against the horizontal
DE 44 00 132 C1: Firewall construction for a motor car with front-mounted drive unit
As a secondary benefit, because the seats have been raised by 20 cm, the passengers are taken away from the more common area of lateral impact in accidents.

The B-Class presents a wide interior, basically due to the Sandwich floor.
The multifunction steering wheel (standard feature) allows the driver to use his/her thumbs to control the radio, telephone and other systems. The power assisted steering (standard feature) aids in the control of the automobile, varying according to the speed.
The COMAND APS is a system where Route instructions are given to the navigation system, and the information is provided via SMS. The car radio, DVD and telephone controls are combined into a single unit with a 6.5 inch screen. The options are: standard Audio 20 radio/single CD, Audio 50 APS or COMAND APS.
Parktronic emits warning tones and uses multiple LEDs to indicate how far the car is from an obstacle.
W245 defines the Light & Sight package with several benefits:
Bi-xenon HID headlamps (optional feature) with gas-discharge bulbs for the dipped beam
Cornering lights (standard feature) where the main-beam dips at road junctions and tight corners
Active light system (standard feature) where the beams follows the steering movements
Headlamp Assist (standard feature) is a sensor on the windscreen monitoring ambient light levels to automatically switch on the headlamps as required
Rain sensor (standard feature) smoothly adjusts the wiper speed, depending on the intensity of the rainfall.
As a standard addition, when entering a tunnel or an underground garage, the Tunnel Mode closes all windows and the panoramic sliding sunroof.

Since its market premiere in summer 2005, the B-Class has evolved into the blueprint for a new species of car which harmonizes the benefits of various vehicle concepts: the four-door model boasts the dynamic design of a sporty saloon, the exterior dimensions of a compact car, the spaciousness of an estate, the versatility of a mini MPV and the trademark safety of a Mercedes-Benz.

The sales figures for the B-Class to date provide clear evidence that the Mercedes-Benz product planners hit the mark with a concept that caters to the motoring needs of today's sophisticated society: since mid-2005, over 350,000 motorists around the world have been won over by the Sports Tourer.

The restyled front end injects the B-Class with more poise and assurance than before. This is primarily down to the radiator grille with its three chromed cross fins painted in metallic grey and the Mercedes star integrated into its centre. However, the more imposing appearance of the B-Class also stems from the new-look bumper - whose design emphasizes the large air intake at the bottom - as well as the modified bonnet.

This new design idiom makes the front look broad and, as a consequence, especially powerful, symbolizing the sporty attributes of the B-Class even more clearly than before. The design at the sides seems more harmonious and elegant than before, because the exterior auto body parts, mirror housings, door handles and skirt panels are now painted to match the body color on all model variants.

The rear styling picks up on the dynamic flow of lines at the front and along the sides. A direct visual link is created by the tail light assemblies, whose upper edges merge seamlessly with the character line along the vehicle's sides. The tail lights sport a new high-brilliance look and draw the gaze to the large tailgate, which now comes with en ergonomically enhanced chrome handle strip. 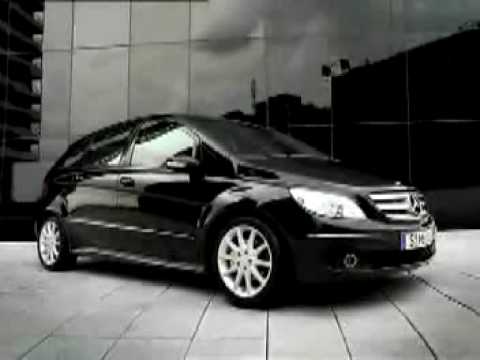