Elf Bowling 1&2 is Released for the Nintendo DS

The first two Elf Bowling games were put in a pack that was called Elf Bowling 1 & 2. It was released for Nintendo DS and Game Boy Advance.

The pack was universally panned by critics, citing poor graphics, crude audio and controls, and no extras beyond the original freeware version. It ranks as the second-lowest scoring game at both GameSpot and Metacritic, receiving only 1.4 out of 10 at GameSpot and 12 out of 100 at Metacritic.

In Elf Bowling, Santa Claus gets revenge on his striking elf employees by using them as bowling pins.

During the game, the elves say phrases such as "Is that all the balls you got, Santa?" when the player misses their first spare opportunity or "Gutter ball!" in a silly-sounding voice when a ball is rolled into the gutter. Other potential distractions for the user are a deer that walks up along the bowling lane that you can "hit" with your bowling ball if you press the right buttons, a frog wearing a Santa hat hopping back and forth across the player's field of vision (resembling Kalvin Kroaker from frogapult also made by Nstorm) if you hit him with the bowling ball his carcass is hauled away from the screen by one of the birds from frogapult, a white rabbit that also jumps and poops across the bowling lane, the elves mooning Santa (asking "who's your daddy" as they do it). Both during the game and after a game finishes, the elves do a dance, shouting "Elf elf, baby!" in reference to Vanilla Ice's song "Ice Ice Baby". One of the elves randomly moons the bowler (Santa).

Now tell the truth: Do you remember ever bothering to play the game after the first week you tried it, or even the first day? You probably don't, because Elf Bowling gets old pretty darned fast. (Don't believe me? try it yourself for a quick reminder.) Most games fade after a while, but 24 hours has to be some kind of record. So why, exactly, would anyone expect people to pay for a DS version of the game, six years after the elf-athletics craze had come and gone? 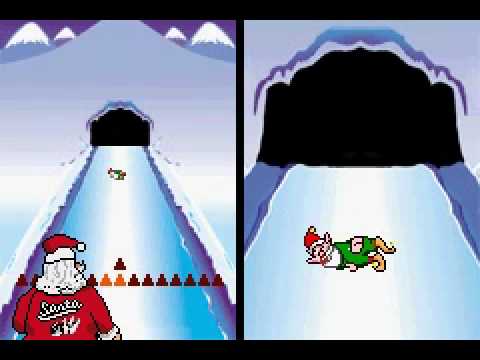