Shaolin Monks was developed by Midway LA (formerly Paradox Development) and published by Midway for the PlayStation 2 and Xbox and was released September 16, 2005 in the United States.

In October 2004, the president of Midway, David F. Zucker, called the release of Shaolin Monks the "first step toward delivering something that Mortal Kombat fans have been calling for: a new game set in the Mortal Kombat universe every year."

Mortal Kombat: Shaolin Monks is an action-adventure game that spans the events of Mortal Kombat II, starting with the aftermath of the first Mortal Kombat. The game centers on two members of the Shaolin Order, Liu Kang and Kung Lao, as they travel through the realms in an attempt to thwart Shang Tsung's plans to dominate Earthrealm.

The game features three main modes of play. Aside from a single-player mode, the game has a co-operative mode, where two players can work together through the game, with access to some areas and items that are inaccessible in single-player mode. There is also a versus mode, where two players can fight against each other in some of the arenas featured in the game. In addition, players can unlock a Survival mode as well as an emulated version of Mortal Kombat II.

In addition to Liu Kang and Kung Lao, the game features other characters from the Mortal Kombat series. Some are there to aid the main characters, including Raiden, Johnny Cage, and Sub-Zero, while others serve as the game's bosses, including Mileena, Reptile, Scorpion and Shao Kahn. Tokens can be found throughout the game which will unlock some of these characters in versus modes.

Shaolin Monks features a multi-directional combat system, which gives players the ability to attack any of the enemies that surround them fluidly. The engine allows the player to maintain combo attacks across multiple enemies, and even continue their combos after launching an enemy into the air through a powerful attack or a throw. The main characters also have many of their signature moves from the series. Combos and special moves are upgradeable through the earning of experience points. These are mainly gained through defeating opponents, with the combo system multiplying the value. The environment plays a vital role in the game, as there are several hazards that will instantly kill an enemy, such as pits in the floor or rotating wheels of spikes. Using some of the environment in this manner, as well as attacking or destroying certain objects, serve as a puzzle-solving element to unlock secrets in the game.

The game also includes fatalities, a common feature of the Mortal Kombat series. Performing combos on enemies increases the fatality meter. Once that meter has reached a certain level, a fatality may be performed, regardless of an opponent's level of health. The main characters have the ability to perform several different fatality moves, some of which are 3D updated versions of fatalities from the first and second Mortal Kombat games. The player can also unlock the ability to do Multalities, which are fatalities performed on multiple enemies at once. The concept of Brutalities from Ultimate Mortal Kombat 3 has also been brought back, though with a different function. Once the move has been performed, the player will be able to give more devastating attacks for a limited time. 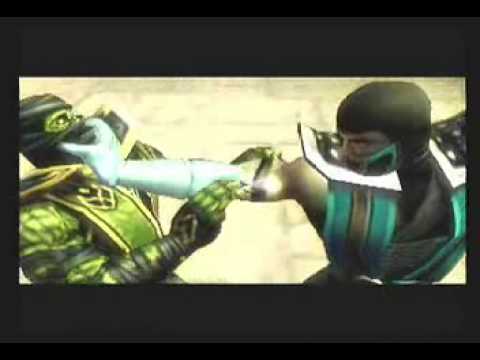