On August 7, 2005, just after 11:30 pm EDT, Gibson broke into local news in the Eastern US and regular programming on ABC's western affiliates to announce Jennings' death from lung cancer.

He read a short statement from the family, and disclosed that Jennings had died in his New York apartment with his wife, two children, and sister at his side. The anchor's ABC colleagues, including Barbara Walters, Diane Sawyer, and Ted Koppel shared their thoughts on Jennings' death. The next morning, Brokaw and Rather fondly remembered their former rival on the morning news shows. "Peter, of the three of us, was our prince," said Brokaw on Today. "He seemed so timeless. He had such élan and style." American President George W. Bush and the Canadian Prime Minister, Paul Martin, offered statements of condolence to the press.

On August 10, 2005, ABC aired a two-hour special, Peter Jennings: Reporter, with archival clips of his reports and interviews with colleagues and friends. The special drew over 9 million viewers, and was the most watched television program of the night. For the week of his death, World News Tonight placed number one in the ratings race for the first time since June 2004.

The August 8, 2005, edition of the program was dedicated to Jennings's memory and four-decade career in news. His death ended the era of the so-called Big Three anchors: Jennings, NBC's Tom Brokaw, and CBS's Dan Rather. During his career, Jennings had reported from every major world capital and war zone, and from all fifty U.S. states, according to the network. Jennings was known for his ability to calmly portray events as they were happening and for his coverage of many major world events. 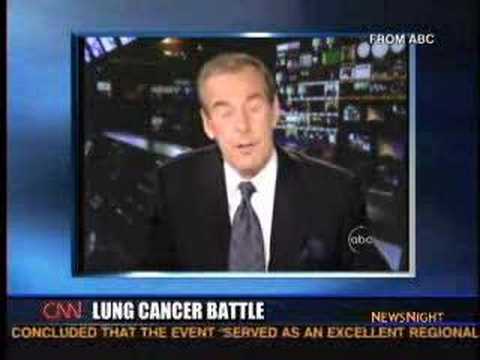