For once, there were no cars rigged with explosives, no men with assault rifles or bomb-filled vests - no proof of malice.

The culprit was a combination of panic and the weight of Shia pilgrims crushing against each other.

One moment Ali Naji was part of a tense, solemn religious procession moving slowly across Baghdad's al-Aima bridge on his way to the golden domes of al-Kadhimiya shrine to commemorate the death of Moussa al-Kadhim, one of Shia Islam's 12 most revered imams.

The next, he was part of a terrifying scramble for life in Iraq's biggest loss of life since the US-led invasion in 2003. At least 769 people were reported killed and 307 injured, but the final death toll could top 1,000.

Almost 1,000 people are known to have died in a stampede of Shia pilgrims in northern Baghdad, Iraqi health officials have said.
So far, there have been at least 965 confirmed deaths, making the incident the single biggest loss of Iraqi life since the US-led invasion in 2003.

The incident happened on a river bridge as about a million Shias marched to a shrine for a religious festival.

Thousands of people have gathered in Baghdad for funerals of the nearly 1,000 Shiite Muslim pilgrims killed in a mass stampede during a religious procession.

Police said 965 pilgrims drowned or were trampled to death and 810 others injured in Wednesday's crush on a bridge in northern Baghdad.

Weeping families and friends are holding funeral processions on the streets of Baghdad as well as in the Shiite holy city of Najaf, and relatives are still arriving at hospitals to identify the dead.

Iraq was shrouded in mourning last night after more than 700 Shia pilgrims died in a stampede across a Baghdad bridge, in the deadliest incident since the March 2003 invasion.
Panic broke out when hundreds of thousands of Shia Muslims converged from alleys on to the al-Aima bridge, crushing hundreds and forcing hundreds more into the Tigris river, where they drowned.

The government said insurgents instigated the disaster by spreading rumours of a suicide bomber. But many survivors said they heard nothing about a putative attack, and blamed the authorities for mishandling the vast gathering.

The official death toll of 769 was expected to top 1,000, said Dr Jaseb Latif Ali, a senior health ministry official, with more than 300 injured. Most had suffocated or drowned. 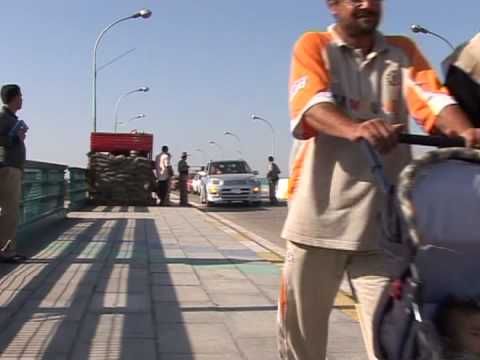