The Ford Fusion (code name CD338) is a mid-size car produced by the Ford Motor Company since the 2006 model year.

The Fusion is manufactured at Ford's Hermosillo Stamping & Assembly plant in Hermosillo, Sonora, Mexico, where the similar Mercury Milan and Lincoln MKZ are also built. All three cars are based on the CD3 platform shared with Mazda's Mazda6 (M/Y 2003-2008) and were launched simultaneously into the market (the MKZ as the Zephyr).
Production on the first Fusions began on August 1, 2005. The Fusion replaced the Mondeo for the Latin American markets—except in Argentina (where the current European Mondeo is available) and in the United States and Canada (where it superseded the mid-size Taurus, which was being phased out). By United States Environmental Protection Agency size category, the Fusion is positioned between the compact Ford Focus and full-size Ford Taurus.
The Fusion was the first production car to feature the "new face of Ford" three-bar grille, which (along with two matching bars below the bumper/fascia forming a five-bar design) was first seen on a retro V-10 powered rear wheel drive concept car called the Ford 427, unveiled in 2003 at the North American International Auto Show (NAIAS) in Detroit. The look has since been used on most of Ford's product line.

At its launch, the Fusion was available in S, SE, and SEL trims. The base engine was the 160 hp (119 kW) Mazda-designed 2.3 L Duratec 23 I4, paired with either a 5-speed manual or 5-speed automatic transmission. SE and SEL models were available with a 221 hp (165 kW) 3.0 L Duratec 30 V6 and a 6-speed automatic.
The Fusion shares some interior parts with the otherwise unrelated Mk III Ford Mondeo, such as part of the console and the seats. Both automatic and manual transmissions are available (the latter only with the I4 engine).
Ford's early advertising campaign for the Fusion in the United States was entitled "Life in Drive", while in Canada it was "Create a Reaction". In January 2007, the company launched a new campaign for the Fusion titled "Fusion Challenge" (later renamed "Ford Challenge"). The Ford Fusion emerged the winner over the Toyota Camry and Honda Accord based on the attributes of styling, handling, and “fun to drive” in head-to-head comparison tests performed by subscribers of Car and Driver and Road and Track magazines in the Washington D.C. and Los Angeles regions.
For 2007, all-wheel drive became available on V6 models. Sirius Satellite Radio is available as an option on the SE and SEL models. The front passenger fold-flat seat was introduced and became standard on the Fusion SEL and SE models. Also, the Fusion now has front-seat side airbags and a side air curtain as standard features, as well as an anti-theft perimeter alarm. (All were previously available as cost options.) Also added is an auxiliary audio input jack for audio transmission from a portable audio player along with some equipment modifications. A DVD-based navigation system also became available.
For the 2008 model year, ABS became a standard feature, as did a tire pressure monitoring system. New optional features include rear parking assist, Ford's "SYNC" multimedia and communication system, and ambient interior lighting. The DVD navigation was replaced with a new generation system featuring voice commands, and for the first time navigation is available also with manual transmission. Finally, 2 packages were added to the options list: Sport Appearance Package and Moon and Tune package. The latter makes the Audiophile 8-speaker audio system available on the SE trim line. Several colors were deleted and some others added.
For 2009, electronic stability control was added as an option. A new appearance package with blue trim became available, and revisions were made to the exterior color palette as well.
In Mexico was offered in two trim levels in 2006: SE and SEL, with automatic transmission only. For the 2007 model year, the S trim was introduced and a manual transmission was newly available for the S and SE trim levels. These two trims had standard 16-inch alloy wheels, while the SEL trim had 17-inch alloy wheels standard. The 2008 model year added Ford's Ford SYNC to he SEL trim. The manual transmission was discontinued after 2008 in Mexico due to poor sales. The 2009 model year was a very short one in Mexico because the 2010 Fusion arrived in dealerships by late February 2009.

The introduction of the Ford Fusion marked a turning point for Ford, finally giving the company a strong entry in the midsize sedan segment for the first time since the original Taurus. Upon its debut, the Fusion's spacious cabin, responsive driving dynamics and attractive styling made it competitive, but there were a few missing elements that prevented it from being a true segment leader. A thorough refresh for 2010, however, addressed those elements, elevating the Fusion to elite status among midsize family sedans.

Underneath its edgy styling resides a stretched chassis first developed for the original Mazda 6, which has lent the Fusion a sporty character not usually associated with family vehicles, let alone ones endowed with the Blue Oval badge. While we are most impressed with the revised edition, past Fusions are an attractive used car choice for those looking for a comfortable, well-equipped family hauler.

The Ford Fusion was thoroughly revised for 2010, with improvements made to most of the car's former sore spots. The styling is now edgier and the interior has been updated with a more modern design featuring Ford's latest entertainment and climate controls. The four-cylinder engine was upgraded to 2.5 liters and now produces 175 horsepower, while the 3.0-liter V6 now makes 240 horses. A new trim level, the Fusion Sport, gets a 3.5-liter V6 good for 263 hp. This Sport model maintains the previous car's sporty hydraulic steering, whereas the regular Fusion switches to more parking-lot and fuel-efficiency-friendly electric steering.

The Fusion is offered in S, SE, Sport and SEL trim levels. Front-wheel drive is standard on four-cylinder and Sport models, while all-wheel drive is optional on the Sport and mandatory on the V6-powered SEL. Even the base trim comes with niceties like 16-inch alloy wheels, cruise control, a telescoping steering column and an auxiliary audio jack. There are an ample number of attractive features available as trim level upgrades or stand-alone options, including bigger wheels, power seats, leather upholstery, dual-zone climate control, heated seats, upgraded stereos, a navigation system and the Sync electronics interface system.

One of the Ford Fusion's key strengths is its cabin, which is spacious and features high-quality materials. The center stack is a bit button-happy, but it's a significant ergonomic and aesthetic improvement over its dated predecessor. The Sync system works great, integrating audio and Bluetooth functionality with voice-recognition technology to provide easy hands-free operation of cell phones and portable MP3 players. While Ford's midsizer isn't the largest car in its class, its generous interior dimensions prove that such sedans need not be as controversially large as the Accord or Mazda 6 in order to accommodate families' needs. A pair of adults will be content in back (especially given the new rear seat headrests), and storage space is adequate.

The Fusion is one of the most engaging family sedans from the driver's perspective. The Sport model feels particularly buttoned-down thanks to its sport-tuned suspension. Performance from the base four-cylinder is adequate, and while the revised 3.0-liter V6 is still down on power compared to its rivals, it's plenty capable for most shoppers in this segment. Should you find the 3.0-liter unit lacking, the 3.5-liter V6 is a good match for competing V6s.

The Ford Fusion was introduced for the 2006 model year. Offered only in front-wheel drive originally, the Fusion was offered in S, SE and SEL trim levels. The standard engine was a 160-hp 2.3-liter four-cylinder. When paired with the standard five-speed manual, this engine was peppy enough, but with the more popular optional five-speed automatic, the Fusion struggled to get out of its own way. The SE and SEL could be optioned with a 221-hp 3.0-liter V6 paired to a six-speed automatic, which improved the Fusion's thrust considerably. However, both these engines were underpowered for the class -- especially the V6 -- and neither was particularly fuel efficient.

Inside, the Ford Fusion's original cabin had a more cohesive look than older Ford sedans, thanks to its crisp lines and coordinated textures. As with the current car, build quality was solid and the seats were well-shaped and supportive, even for taller folk. Unfortunately, the quality of some plastics was still a couple steps behind the import-brand competition. For 2008, Ford's Sync system became available, although it was sullied by the Fusion's old and ugly standard stereo head unit.

Key changes to the Fusion included front seat airbags, side curtain airbags and an auxiliary audio jack made standard for '07. Options like navigation, satellite radio and all-wheel drive were added to the options sheet, along with additional standard equipment on the SE and SEL models. As such, we'd stick with this model year or later. Antilock brakes became standard on all Fusions the following year, and more optional equipment was added. The Sport Appearance package that added 18-inch wheels, a sport-tuned suspension and special trim also debuted -- it's the pick of the Fusion litter. For '09, stability control became optional on all Fusions (we recommend finding one so equipped) and traction control became standard. An oddball Blue Suede package featuring black and blue faux-suede seats was produced for this year. 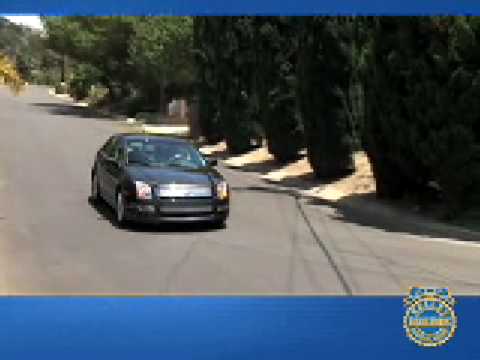