The first Gigantour is held

However, they have also performed with several highly respected bands that are not quite as popular. Each of the bands that were picked for Gigantour was chosen because Dave Mustaine believed it was among the best of the bands that he had played with or heard in his career with Megadeth, regardless of how many albums it had sold. Such bands as Dream Theater, Nevermore and Overkill are all highly respected by members of many other big-name bands and have strong followings in the metal world, but they are not nearly as commercially successful as big-name metal bands. Gigantour is an event that brings bands together for no other reason than the fact that they put on a great show.

Furthermore, the tour was devised as a way to cater to fans of many different styles of metal in the one package. There is much cross-over appeal in each of the bands on the bill, but they normally would not appear on a bill together unless it was another mainstream festival. Gigantour is a chance for fans of all styles of metal to see the best of many different styles in one place, with the music solely focused on great heavy metal, and not on current trends and fashions.

Notable Incidents
Lack of a second stage on some tour stops

For the San Diego show there was no space for a second stage at the venue, and so many bands were left off the bill. As a result only four bands played that day, with Nevermore opening, followed by Fear Factory, Dream Theater, and Megadeth closing the show. To compensate for the glaring lack of advertised bands, however, each band performed extended sets, with Dream Theater and Megadeth playing approximately an hour and a half each.

The only second stage band that got to play this show was Bobaflex, with the rest of the bands being unable to play due to inclement weather. The first stage, being covered, was unaffected. All the bands still participated in their Meet 'n' Greet sessions.

In honor of late Pantera guitarist "Dimebag" Darrell Abbott, who was shot and killed on stage the previous December, Dream Theater, Dave Mustaine, Burton C. Bell (of Fear Factory) and Russell Allen (of Symphony X) performed the Pantera classic "Cemetery Gates." The performance is included on the bonus disc of the DVD.

During Dream Theater's set, Mike Portnoy brought Richard Christy of Death on stage for a long drum solo. The two got on the largest drum kit and exchanged parts of famous heavy metal favorites such as Van Halen's "Hot for Teacher", Rush's "YYZ", Iron Maiden's "Run to the Hills" and "Where Eagles Dare", Slayer's "Raining Blood" and many others — some of which featured accompaniment from John Petrucci on guitar.

The Dillinger Escape Plan were forced to cancel the tour
August 30, 2005

The Dillinger Escape Plan were forced to pull out of their remaining Gigantour live dates because of an injury to guitarist Ben Weinman. Weinman severely re-injured his arm at the House of Blues in Atlantic City and was told by a specialist that he would be unable to perform until further notice.

Dream Theater played their last Gigantour date in Toronto. As a surprise, Mike Portnoy joined Dave Mustaine, James MacDonough, Shawn Drover, and Glen Drover performing "Peace Sells". Portnoy played the drums while Shawn Drover picked up a guitar and was the third guitar player on the stage. Shawn did one of the solos and surprised everyone in the crowd. Unfortunately, his guitar was unplugged for a fair bit of the song. According to Megadeth bassist James Macdonough, Portnoy pulled a prank on Shawn by pouring baby powder on the snare drum when he was getting off the drum kit. As soon as Megadeth began playing "Holy Wars...The Punishment Due", Shawn's snare drum "turned into a 'smoke' machine". Portnoy admitted to the prank on the DVD. This is one example of many pranks done towards the end of Gigantour shows.

Scott Ian, Charlie Benante, and Joey Belladonna of Anthrax, along with Burton C. Bell of Fear Factory, members from Bobaflex, tour managers from Fear Factory and Anthrax, and others, joined Megadeth on stage to sing "Peace Sells".

"Back in the Day" and Happy Birthday Wish to Mustaine
September 11, 2005 - Ridgefield, WA

The Portland show (which was actually played in Ridgefield, Washington) marked the end of Gigantour's inaugural year. As a special farewell, members from all the bands and crew of Gigantour sang together the Megadeth song "Back in the Day." The show was wrapped up with a surprise happy birthday song to Dave Mustaine, whose birthday is September 13. 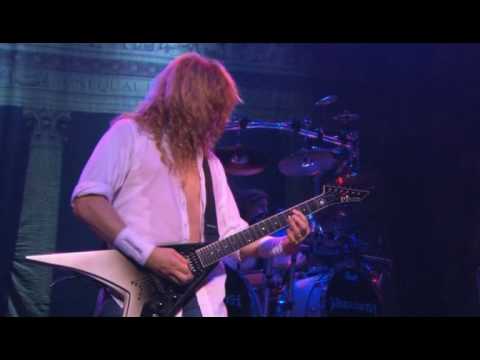