Duncan shrugged off a stretch of eight straight misses to dominate the fourth quarter of Game 7, finishing with 25 points and 11 rebounds as the Spurs beat the Detroit Pistons 81-74 Thursday night.

Duncan earned his third MVP of the finals, giving San Antonio its third title in seven years and denying Detroit a chance to repeat.

The San Antonio Spurs beat the Detroit Pistons in seven games to win the 2005 NBA Championship. These are notes from after Game 7 about that final game and the series as a whole:

REMEMBER THE ALAMO, THREE TIMES OVER: Before a delirious home crowd at the SBC Center, the San Antonio Spurs won their third NBA Championship, all coming in the last seven seasons. . . Dethroning last year’s champion Detroit Pistons, Spurs added this year’s title win to their previous Finals triumphs over the New York Knicks (five games in 1999) and New Jersey Nets (six games in 2003). . . Head coach Gregg Popovich has led the Spurs to all three of their NBA titles. . . Only Tim Duncan has played for the Spurs during all three of their Championship runs (Malik Rose, a member of the ’99 and ’03 Champions, was traded to New York in mid-season this year). M-V-P: Tim Duncan, who put up game-high points (25) and rebounds (11) in the deciding Game Seven, earned his third NBA Finals MVP award. . .

Source: Inside Hoops Added by: corey 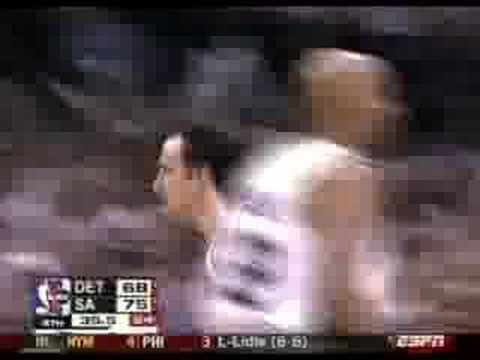