"Speed of Sound" is a song by English alternative rock band Coldplay.

It was written by all members of the band for their third album, X&Y. Built around a piano riff, the song builds into a huge, synthesizer-heavy chorus. It was released on 23 May 2005 by Parlophone Records as the lead single from the album.

Coldplay vocalist Chris Martin admitted that the song was developed after the band had listened to English alternative rock singer Kate Bush. The song's drumbeat is similar to Bush's 1985 song "Running Up That Hill". Upon the song's release, it charted in the UK Singles Chart in the number two position. In the United States, it reached number eight on the Billboard Hot 100.

Although it was recognized Song of the Year by the American Society of Composers, Authors and Publishers (ASCAP), the song received only mixed reviews from critics. "Speed of Sound" was nominated twice at the 48th Grammy Awards. The song won a Brit Award in the category for Best British Single in 2006. The track's music video was nominated for four MTV Video Music Awards. "Speed of Sound" was also the billionth song downloaded from the iTunes Store. 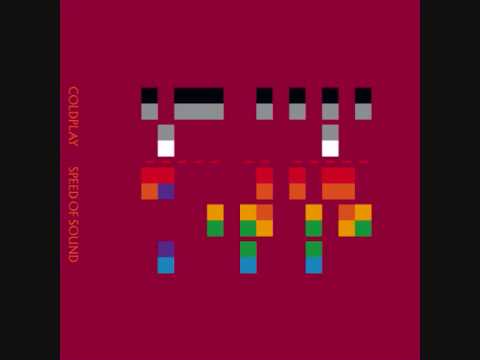