The Porsche Carrera GT (Project Code 980) is a mid-engined sports car that was manufactured by Porsche in Leipzig, Germany.

The development of Carrera GT can be traced back to its predecessors, the 911 GT1 and LMP1-98 racing cars. Due in part to the FIA and ACO rule changes in 1998, both designs had ended. Porsche at the time had planned on a new Le Mans prototype for 1999. The car was initially intended to use a turbocharged flat-6, but was later redesigned to use a new V10 engine, pushing the project back to planned completion in 2000. The V10 was a unit secretly built by Porsche for the Footwork Formula One team in 1992, but later shelved. The engine was resurrected for the Le Mans prototype and increased in size to 5.7 litres. Unfortunately the project was canceled after two days of testing for the first car, in mid-1999, mostly due to Porsche's wish to build the Cayenne SUV with involvement from Volkswagen and Audi, thus requiring engineering expertise to be pulled from the motorsports division. It was also speculated that VW-Audi chairman Ferdinand Piëch wanted Audi's new Le Mans Prototype, the Audi R8 not to face competition from Porsche in 2004.

Porsche did keep part of the project alive by using the 5.5 L V10 from the prototype in a concept car shown at the 2000 Geneva Motor Show, mainly in an attempt to draw attention to their display. Surprising interest in the vehicle and an influx of revenue provided from the Cayenne helped Porsche decide to produce the car, and development started on a road-legal version that would be produced in small numbers at Porsche's new manufacturing facility in Leipzig. Porsche started a production run of Carrera GTs in 2004, shipping the units with an MSRP of $440,000 USD and a dealer invoice price of approximately $414,800 USD. In addition, the delivery charge could be as much as $5,000 USD. The first Carrera GT went on sale in the US on January 31, 2004.

Originally a production run of 1,500 cars was planned. But Porsche announced in August, 2005 that it would not continue production of the Carrera GT through 2006, citing discontinuation was due to changing airbag regulations in the US. As of May 6, 2006, 1,270 GT's had been manufactured, with 604 being sold in the United States.

The Carrera GT has a basic five colour paint scheme which includes Guards Red, Fayence Yellow, Basalt Black, GT Silver and Seal Grey. Custom colours were also available from the factory. A traditional six-speed manual transmission is the only available transmission. Attached to this gearbox is a beechwood gearknob which pays homage to the wooden gearknob used in the Porsche 917 Le Mans racers. In its second year of production, a limited edition carbon fibre knob was also made available.
The Carrera GT has large side inlets and air dams that help cool the large V10 engine of 612 bhp (456 kW; 620 PS)[citation needed] framed by the carbon fibre rear hood. Fitted with Porsche's latest Carbon fibre-reinforced Silicon Carbide (C/SiC) ceramic composite brake system, the 15-inch (380 mm) SGL Carbon disc brakes make an impressive appearance underneath the 19 inch front and 20 inch rear wheels. Similar to other Porsche models, such as the 911, the GT includes an automated rear wing spoiler which deploys above 70 mph (110 km/h).

The interior is fitted with soft leather. Bose audio system and navigation systems are available as options. In typical Porsche fashion, the ignition is to the left of the steering wheel. This placement dates back to the early days of Le Mans racing when drivers were required to make a running start, hop into their cars, start them and begin the race. The placement of the ignition enabled the driver to start the car with his left hand and put it in gear with his right.

The Porsche Carrera GT lifts its nose, squats down, and leaps forward like a world-class sprinter out of the blocks. With traction control activated, wheelspin isn't an issue in first or second gear, which clonks in at 48 mph. Porsche claims that the Carrera GT can storm from 0 to 62 mph in just 3.9 seconds-on this run, we record 4.2 seconds, and that feels pretty damned quick.

Second gear stretches to an indicated 82 mph, third is good for 113 mph, and fourth takes us to 143 mph-close to the chip-controlled top speed for all BMWs, Audis, and Mercedes-Benzes. In the Carrera GT, though, there are still two more ratios to come. Fifth runs out of revs at 170 mph, and sixth takes over at 7000 rpm. Because it's not that aerodynamically efficient (the Cd is 0.40), the Carrera GT tops out at 205 mph-plenty fast but some way short of a McLaren F1, for instance. Porsche tester Roland Kussmaul says that some of the prototypes have been clocked at up to 218 mph, but one would need a ton of room to achieve that. In the vast acreage of the Michelin proving ground at Gross-Dlln, near Berlin, we run out of road at 199 mph. This exercise looks positively stunning from the outside, but on a dry stretch of arrow-straight tarmac, driving this ber-Porsche at this speed is childishly simple.

The Carrera GT is Porsche's fastest and most expensive supercar, challenging the Ferrari Enzo Ferrari and the upcoming Mercedes-Benz SLR McLaren for the title of ultimate supercar of the early twenty-first century. Like the others, the Carrera has a carbon fiber monocoque chassis, with a matching drivetrain cradle. Made in Italy, each monocoque consists of more than 1000 individual elements that are glued, laminated, and baked together. Attached to the carbon fiber structure are composite body panels, so you need to look long and hard to detect the few metal ingredients. Among them are the front chassis rails, tubular A-post inserts, fuel tank, and double control-arm and pushrod suspension. The combination of an ultra-stiff structure with suspension components mounted without rubber isolation yields exceptional steering precision and unfiltered, unamplified communication among car, driver, and the road on which they travel.

Ferdinand Porsche would be proud of the Carrera GT. The company he founded in 1948 has produced an amazing string of sports cars that was only recently interrupted by—of all things—a truck. If the introduction of that Cayenne sport-ute had you wondering if the folks from Zuffenhausen had gone soft, think again. The exotic $448,400 605-hp Carrera GT revealed here is arguably the finest sports car the company has ever produced.

It is an incredible car, with a plethora of juicy technical details and glorious thrust from a mid-mounted aluminum V-10 engine. We learned about both during a day of testing and driving at Italy's Adria International Raceway.

Remember the Acura NSX, the car that brought family-sedan drivability to the supercar ranks? Porsche has done much the same thing here, but with the performance bar raised to a dizzying height. Let's check the numbers.

So the Enzo is a few ticks quicker, but consider this: Unlike the Enzo, which has an automated manual transmission that automatically operates the clutch and shifter, the Carrera GT has a good ol' six-speed manual and a traditional clutch. Although we tried our best, the Carrera is extremely hard to get off the line cleanly. The 5.7-liter V-10 engine has about zero inertia. Breathing on the gas pedal sends the revs soaring. Likewise, if you lift off, they plummet. And the engine is all too willing to overpower the rear tires.

The clutch operates like an on/off switch and is tough to engage smoothly. Unlike a regular clutch that has only one friction disc, the GT has four and is about two-thirds the diameter (6.7 inches) of a standard 911 clutch.

It and the dry-sump oil system allowed engineers to mount the engine lower (the crankshaft is only 3.9 inches off the carbon-fiber underbody tray) and reap the handling benefits of a lower center of gravity.

The clutch engages in maybe the last inch of the floor-mounted pedal's travel. The best way we found to get the car rolling was by slowly releasing the pedal without giving it any gas. Every time we added some throttle, the car stalled or we smoked the tires. Pulling into dense traffic produces sweaty palms. The Carrera GT is, however, terrifically durable. We saw one car endure about 40 drop-clutch launches with no ill effect on its performance.

The rest of the car is a pure joy. Flat steel rods join the high-mounted shifter to the transmission and provide a satisfying mechanical feel that makes you glad you have to shift the old-fashioned way.

That free-revving engine is unlike anything else we've ever sampled. It's loud, blowing 93 dBA on our sound meter during a full-throttle blast, but the shriek is the kind that prickles your body hair. The power peak is high (605 horsepower at 8000 rpm), as is the torque (435 pound-feet at 5750 rpm), but the engine is quite flexible.

The engine, the gearbox, and the differential reside in a lightweight carbon-fiber subframe that bolts to a bulkhead behind the two seats. Since the subframe carries the structural load, Porsche used three flexible engine mounts—one in front and two at the rear—to isolate the chassis from engine vibrations. 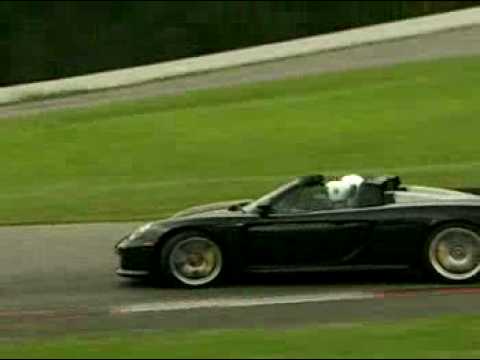