The Nissan Titan introduced in 2004, is a full-size pickup truck produced for the North American market by Nissan.

The truck shares the stretched Nissan F-Alpha platform with the Nissan Armada and Infiniti QX56 SUVs, and is manufactured in Canton, Mississippi, United States.

The Titan is not intended to challenge the big 3 "Detroit Trucks" in sales numbers, but rather is meant to be an alternative to them and provide Nissan with some in-roads into the highly competitive truck market.

Upon its release, the Titan was praised for its combination of a roomy interior, strong towing capacity, aggressive styling, and innovative features, such as wide opening rear doors in the King Cab, factory sprayed-on bedliner, and a lockable storage compartment outside the bed on the driver's side. It was listed by Edmunds.com as the best full-size truck. The Titan was nominated for the North American Truck of the Year award for 2004.

The Future of the Nissan Titan is yet to be determined. Nissan had been working with Chrysler to build a truck for them based on the Dodge Ram, but both companies decided to part ways in Aug 09. Nissan is committed to staying in the light truck market and is looking at other manufacturers (such as Ford, GM, and Toyota) or building the second generation Titan in house. Production of the Frontier, Pathfinder, and X-Terra would also be uncertain because of their Titan underpinnings.

Making news in November 2009; "CEO of Nissan, Carlos Ghosn, has revealed that the pickup will survive. Ghosn went on to reveal that it could be designed and built completely in-house at Nissan or with a new partner, though the specifics haven’t been finalized."According to an article posted by Autoblog January 5 2010 "Nissan will continue to build the current Titan at its factory in Canton, Mississippi."

2004 and 2005 Nissan Titan trucks and Nissan Pathfinder Armada SUVs have reported problems with warping of their rotors. Although no recall was ever issued for this problem, Nissan has, with good faith, replaced or repaired the rotors and brakes of those models affected by the problem due to the existance of a repair bulletin.

The problem has since been fixed on subsequent model years.

Full-size pickup trucks are about as all-American as baseball and apple pie. And traditionally, consumers interested in purchasing a full-size pickup were limited to the offerings from the domestic Big Three automakers. But in the past few years additional choices have become available. One of these is the Nissan Titan.

The Titan, introduced for 2004, was the first Japanese pickup to truly possess the attributes that buyers typically expect from a full-size truck. Manufactured at Nissan's Canton, Mississippi, plant, it boasts dimensions and capabilities that are very similar to those of domestic full-size pickups. Though it hasn't sold as well as its rivals, the Nissan Titan can still meet the needs of many truck shoppers.

The Nissan Titan is a full-size pickup truck. In terms of size, it's very similar to the trucks offered by domestic automakers, which means it provides competitive amounts of cargo and interior room. There's a fully boxed frame underneath for maximum rigidity and strength, as well as a traditional solid rear axle with leaf-spring support.

Nissan currently offers the Titan in extended-cab (King Cab) and crew-cab styles, with two bed lengths each. Buyers may also choose between standard- and long-wheelbase versions, with the latter adding 20 inches in length. The King Cab is offered with either a 6.5- or 8-foot bed, while those on the crew cab are each 1 foot shorter. The King Cab's rear-hinged doors open extra wide to aid cargo loading or a passenger's entry to the rear seats. The crew cab has four traditional doors and a larger rear seating area with more available rear legroom than the extended cab.

Each Nissan Titan body style is available in four trim levels. Similar to other Nissan products, there's the entry-level XE, the midgrade SE, off-road-focused PRO-4X and the luxury-oriented LE. The XE has a front bench seat; captain's chairs with a flow-through console are standard on the SE, PRO-4X and LE. Notable options, depending on trim, include upgraded audio systems, a navigation system, front-seat side and side curtain airbags, a rear-seat DVD entertainment system and utility-enhancing cargo bed features. For those who anticipate pulling trailers, the Max Utility tow package is also available.

The PRO-4X trim level adds equipment for serious off-roaders that include Rancho shocks, a lower final-drive ratio, underbody skid plates, an electronic locking differential and 18-inch off-road wheels with aggressive off-road tires. Unique exterior and interior styling cues to differentiate the PRO-4X from the other Titan models are also included.

For power, Nissan offers only one powertrain combination: a 5.6-liter V8 connected to a five-speed automatic transmission. The V8 is rated at 317 horsepower and 385 pound-feet of torque. The transmission features a tow/haul mode for when the truck is used for pulling or carrying heavy loads. For every body style and trim combination, two- or four-wheel drive is available.

In Nissan Titan reviews, our editors have found it to be powerful and capable both on- and off-road. Downsides include a lack of additional powertrain choices and the absence of a heavy-duty model. The Titan has also been outclassed by newer competitors in terms of comfort and overall design. Still, we think Nissan's Titan is worth a look.

The Titan debuted for 2004, and these earlier trucks could be a good choice for a shopper searching for a used late-model pickup. Its first couple of years, in particular, were noteworthy in that it outclassed domestic pickups in many ways. The most notable changes for the Nissan Titan came for the 2008 model year -- they included the addition of a long-wheelbase model, exterior and interior styling refreshes and new features. Models built for 2007 and earlier were available in one wheelbase length only, lacked the two different bed lengths for each body style and also had a reduced maximum payload.

When it comes to full size pickups, three words have dominated headlines over the last six months: Toyota, Toyota, Toyota. Can the Tundra penetrate the Big 2.5’s final sanctuary? Who will crumble first, GM or Ford? It’s made in Texas! Yada, yada, yada. But Toyota’s not the only American-made foreign brand playing in the full-size pickup truck sandbox. Nissan was here first and they’re not going away. So can this Mississippi Titan play ball or is it destined to remain a third-string niche player?

Nissan jumped feet first into the full-sized truck market with their 2004 Titan model. Wide columns of chrome in the grill and front fascia projects mass and solidity. The now familiar look has aged well and bespeaks design originality. And there you have it.

If you’re asking “What pickup would John Stuart Mill Drive?”, Nissan gets high marks for glove-friendly door handles, standard factory spray-on bed liner, Utili-track cargo restraining system, a 12-volt bed outlet and a hidden strut that eases tailgate opening and closing. Gadget lovers will appreciate the “climate-resistant” lockbox positioned in the driver’s side rear quarter panel– until the the real world dents the panel and renders the cubby “climate-tolerant."

The Titan’s practicality continues with front seats that fold flat, providing blue print-wielding contractors with a useable work table. The Titan’s center console storage is large enough to stow and secure a laptop computer or, for Luddite load luggers, hang a few file folders. Pickup truck buyers love these features so much Nissan’s competitors have copied them.

Nissan’s laid out the interior controls and gauges logically, with genre-appropriate austerity. The Titan Crew Cab supplies abundant room for four husky carpenters or a family of five. Dashboard and door panels are appropriately washable. Passengers who utilize valet parking at Kennedy Center events will wrinkle their noses at the Titan’s confines. But that’s okay; this truck isn’t for them.

What lies beneath is what usually gets hardcore pickup truck buyers blood a pumpin’. Nissan uses a fully boxed ladder frame supplied by Tower Automotive. Ford F-150 aficionados point out that the Titan’s “boxed” rails are really two C rails bonded together, rather than formed from one piece of material. Yes, well, the Titan’s frame’s cross members are welded into place for extra strength, rather than riveted. Overall, it's a professional grade tool, ready for years of action.

Most full size pickup trucks offer a wide array of engines of varying displacement: six-cylinders, diesels and big bore V8’s. Nissan keeps it simple: you get your choice of a 5.6-liter V8 married to a five-speed cog swapper or somebody else’s truck. For 2007, Nissan’s engine savants have finagled four percent more power from their 32-valve mill, boosting grunt to 317hp and 385 lbs-ft of torque. Too bad they forgot to do something about the abysmal 14/18mpg efficiency.

Still, it’s a dearth of power compared to Tundra’s 381hp and 401 ft.-lbs. of twist. But the Titan isn’t about to be left in the dust. A low first gear ratio and impatient torque converter get the 5,323lbs leviathan moving in a hurry– sometimes a little too quickly. Thanks to the standard limited-slip differential, I painted two symmetrical 10’ black lines on the concrete when I launched from a four-way stop. Fortunately the cop right behind me had better things to do than write a love letter to my spastic right foot.

My test truck’s [optional] Rancho performance shocks helped give the Titan surprising poise when maneuvering. Nissan’s pickup truck is decidedly more athletic feeling than Toyota’s new Tundra. For that matter, the Titan’s considerably more agile than trucks from Ford, GM or Dodge. The Titan’s no Lotus Elise through the slalom, but it delivers far more confidence through a cloverleaf than any of its rivals.

When Nissan first ushered the new Titan onto American dealer's showroom floors, the 'Merican made pickup was considered big, bad and bold. Since then Ford, GM and Toyota have updated and enlarged their models. These days, the Titan looks a whole lot less Titanic, and its prospects have dimmed.

Since the Titan’s introduction, Nissan’s plant has been operating just below its 90k units per year capacity. While not an abject failure, it’s not the runaway success Nissan envisioned. Reliability issues have certainly not helped it chances. And now Toyota’s entrée with a true full-sized truck is forcing deep discounts at Nissan dealerships. For buyers, that's a good thing. The Titan is a worthy (if sometimes quality challenged) competitor in a field crowded with excellence. 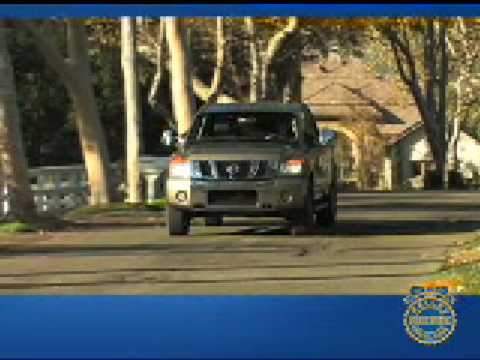