The Chrysler Crossfire is a rear-wheel drive sports car marketed by Chrysler as both coupé and roadster and built for Chrysler by Karmann of Germany.

The two-seater arrived in 2001 as a concept car designed by Eric Stoddard with further refinement by Andrew Dyson before beginning production in 2003.
The Crossfire's fastback roof and broad rear fenders made for a rear end design that prompted automotive journalists to describe the new car's resemblance to American Motor's 1965-1967 Marlin. For example, Rob Rothwell wrote ...when I first espied the rear lines of the Chrysler Crossfire I was instantly transported back to 1965 and my favorite car of that year, the Rambler Marlin.
The name Crossfire refers to the two character lines that run from front to rear along the body sides — crossing each other midway through the door panel. Conceived during the period of Chrysler's ownership by Daimler-Benz, the name also refers to the collaboration of the two companies.

The Crossfire shares 40% [6] of its components with other Mercedes-Benz models. The engine bay of the Crossfire is virtually identical to the Mercedes-Benz SLK320 on the R170 platform. This engine bay has now been proven capable of housing Mercedes V8 engines, which increases the car's performance to an overwhelming level[citation needed]. The wheelbase and track width are also identical to the SLK320. The seats from the SLK320 bolt directly into the Crossfire chassis.
The standard transmission is a 6-speed manual with an optional 5-speed automatic. Base (Standard) and Limited models, originally sold beginning in the 2004 model year, are equipped with a 3.2 L, 18-valve, SOHC V6 engine which produces 215 hp (160 kW) and 229 lb·ft (310 N·m) of torque.
The 6-speed transmission on the Chrysler Crossfire is a variant of the NSG-370. The automatic transmission on the Crossfire achieves a better EPA fuel efficiency rating over the 6MT, mostly due to the difference in gear ratios.

The sales of the Crossfire have been slow, with an average 230 day supply of the vehicles as of November 2005. In December, the cars were listed on Overstock.com to clear out inventory. Very few Crossfires were imported to the United States and Mexico for 2006 (and almost all of these were roadsters).
On November 1, 2007, Chrysler announced that, as part of its restructuring plans, the Chrysler Crossfire would be one of four models discontinued after the 2008 model year.
The last Crossfire rolled off of the assembly line on December 17, 2007.

When the Chrysler Crossfire concept was first introduced at the 2001 North American International Auto Show, there was genuine interest and excitement from both the motoring press and the public. Here was the first tantalizing fruit of the DaimlerChrysler merger that would combine German engineering and American style. A production model was announced, and the first Crossfires started to appear a few years later.

Available as a two-seat coupe or roadster, the Chrysler Crossfire was largely based on the first-generation Mercedes-Benz SLK. Its exterior design always turned heads, but the aged platform and unimpressive driving dynamics were major drawbacks. The Crossfire's steering response in particular was lackluster due to the use of the previous SLK's old-school recirculating-ball steering. Additionally, the vehicle's ride quality often seemed harsh, particularly on the high-performance SRT-6 version.

The Crossfire's slow sales could also be attributed to an interior that didn't look as rich as the car's exterior styling would suggest. There was also the cramped Crossfire's utter lack of utility. It's still an attractive vehicle to behold, but the Crossfire was simply outclassed by other vehicles in terms of luxury, brand cachet and performance.

The Chrysler Crossfire was available only in coupe form when it debuted in 2004, with a convertible model arriving the next year. The standard engine throughout the model cycle was a Mercedes-sourced 3.2-liter six-cylinder engine that produced 215 horsepower and 229 pound-feet of torque. The transmission choice was between a standard six-speed manual and an optional five-speed automatic. The short-lived 2005-'06 Crossfire SRT-6 model boasted a sport-tuned suspension and a fire-breathing, supercharged 330-hp engine that came only with a five-speed automatic.

Leather upholstery was standard in 2004, when only one well-equipped trim level was offered, but starting in 2005 the Crossfire was offered in base and Limited trims, and the base car came with cloth upholstery and a limited roster of standard equipment. The Limited livened things up with power leather seats, an Infinity stereo and more sound insulation. In addition to its engine and suspension upgrades, the SRT-6 models added 18-inch wheels up front and 19-inchers out back and Napa Pearl leather seats with Alcantara suede inserts with enhanced bolstering. Unique to the base Roadster was an optional Special Edition package (2006 and '07 model years) that included Inferno Red Crystal Pearl Coat exterior paint, Dark Slate Gray cloth seats, SRT-6style cast-aluminum wheels, a black windshield surround and satin silver door handles and side louvers. Otherwise, nothing much changed until 2008, when the base trim was dropped.

In reviews, our editors praised the Chrysler Crossfire's daringly distinctive looks, and the SRT-6 was loved for its blistering straight-line performance. However, the outdated steering system was unpleasant and the ride was stiff — unacceptably so in the SRT-6. Acceleration from the base 215-hp V6 was adequate but uninspiring. Overall, the Crossfire was an interesting styling exercise, but its driving character left much to be desired.

As you may recall, the Crossfire started life as a show car at the 2001 Detroit auto show. To hear Chrysler tell it, "Public response to our Chrysler Crossfire concept vehicle was overwhelming." Maybe soalthough we weren't nearly as enamored of the split-windshield, stacked-headlight show car as we are of the production version. But even if faced with genuine public demand, does anyone think for a minute that back in 2001with Chrysler awash in pink slips, red ink, and off-lease Grand CherokeesDieter Zetsche would have coughed up the money to develop an all-new two-seat sports coupe from the ground up? It would have been about as likely as his appearing before the next DaimlerChrysler shareholders' meeting with a shaved mustache and a sequinned ball gown, belting out "I Gotta Be Me." No, if the Crossfire was going to take root in hard times, the development team would have to seek out a novel solution.

A donor platform, in roughly the right size, with the proper driving wheels, was found in the Mercedes-Benz SLK and was adapted for the bespoke new body, which uses all its own sheetmetal. The mechanicals were all purloined, although retuned for this application. The interior was borrowed as well, then restyled to provide a unique appearance. In the face of complex stampings (such as the X-shaped crease on the doors, the deep rear quarter-panels, and the grooved hood) and production numbers of only 20,000 per year, manufacturing was farmed out to German coachbuilder Karmann.

Its origins are unusual, but the Crossfire is a different kind of Chrysler for other reasons. It's Chrysler's smallest-ever model and first-ever sports car, and it pioneers the marque's return to rear-wheel drive. And, aside from the Plymouth-born Prowler, it's the first two-seat Chrysler since the ill-fated TC by Maserati (another transatlantic specialty model built in conjunction with a prestigious European automakerthe eerie similarities to this effort must have had the more superstitious members of the Crossfire team throwing salt over their shoulders).

While that Iacocca-era two-seat exotic looked an awful lot like a pedestrian LeBaron convertible, the Crossfire won't be confused with anything in the current lineup. Andrew Dyson led the team that transformed Eric Stoddard's show car into a production-ready reality. The front-end styling is obviously changed, but Dyson was otherwise pretty faithful to the concept considering he also had to widen the boattail rear and take eight inches out of the wheelbase. The new frontal appearance, the high bodysides and short greenhouse, and the pushed-forward front axle and pulled-back windshield are all themes that will be picked up by other Chryslers.

But even if every aspect of this design finds its way onto every other Chrysler, the Crossfire would still look unique because of its diminutive size. The wheelbase is only 94.5 inches, and both the front and rear overhangs are minimal. The wee dimensions are apparent inside as well. This is a true two-seater, without even vestigial rear seats. A high bulkhead immediately aft of the front seats precludes tossing anything behind them, and there's only 7.6 cubic feet of cargo space under the rear hatch. You're cocooned inside, with a high beltline rising toward the rear, a sloping roof, and a pinched view out the back. The center console is fairly large, but the cabin is wide enough not to feel confining. Tall drivers who need to push the seat far back may find the headliner too close, however. 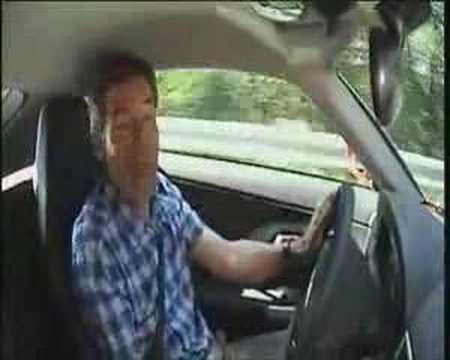