Motown is Titletown AUBURN HILLS, Mich. -- The Lakers left the court in pieces.

Karl Malone kept his head down, Shaquille O'Neal absently slapped a few high-fives and Kobe Bryant jogged in late, encased in his own thoughts.

The Pistons celebrated in concert, pulling their wives and children and entourages onto an increasingly shaky stage at the center of The Palace. They crowded around coach Larry Brown, who stood next to the Larry O'Brien Trophy -- a small, golden monument to the glories of teamwork.

"We did it the right way: working hard, working together," said president of basketball operations Joe Dumars, who built the first championship team in Detroit since his playing days. "This isn't a star system we've got here. I just think this is the ultimate team."

Watching the Pistons beat the Lakers last night to win the NBA championship was a pleasure. No one gave them a chance at the beginning of the series yet they dominated the Lakers with defense, good fundamentals, and team basketball. Some miscellaneous notes:

- The Lakers' age, lack of cohesion, and reliance on luck finally showed in this series. The last few years and especially in these playoffs, whenever the Lakers needed a big bucket or a run to get back in the game, some random player would come off the bench to score 10 points above his average, Kobe would nail an impossible shot, or Shaq would get hot at the free throw line. Except for game 2, that didn't happen in this series. If only Sam Cassell hadn't been hurt and the Lakers had been a little less lucky in the Minnesota series...

AUBURN HILLS, Mich., June 15 (Ticker) -- In one for the ages, the Detroit Pistons are NBA champions. And they did it the right way.

The Pistons completed the biggest upset in NBA Finals history, toppling the mighty but misguided Los Angeles Lakers with a 100-87 victory that was entirely emblematic of a team triumphing over individuals.

In front of a raucous and unrelenting sellout crowd at The Palace of Auburn Hills, Detroit closed out the series in five games for its first title in 14 years, harkening back to the days of the "Bad Boys." 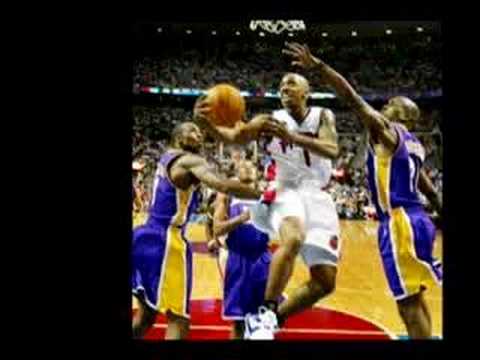